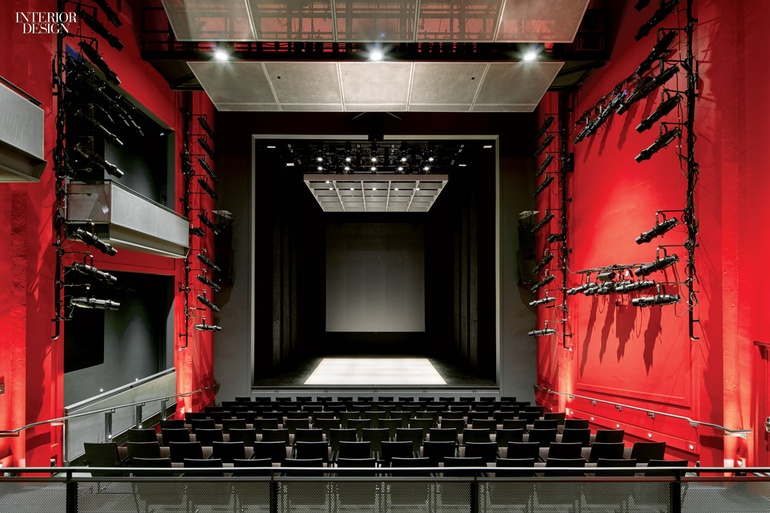 With the neighborhood now revitalizing, the Strand caught the eye of the American Conservatory Theater’s board members, who were hunting for an intimate venue to complement their 1,000-seat Geary Theater. Plus, ACT’s costume shop happened to be two doors down. When the board then showed the abandoned Strand to Skidmore, Owings & Merrill design director Michael Duncan, what struck him was its rust-red exterior back-dropped by the green-tinged curtain wall of the San Francisco Federal Building by Morphosis. “The red and the green really vibrated,” Duncan says. “So we souped it up, making it a red that could not be ignored.”

Other facade work was much more intensive. On the upper part, he re-stored wood-framed casement windows and Italianate cornice and relief details. Below, where everything original had been lost, he re-created similar ornamentation in glass-fiber reinforced concrete to frame a storefront system. He also added a canopy in steel and glass.

As for the interior, he says, “It was trashed.” The lion’s share of the 20,000 square feet remained a proscenium-form auditorium, which can now seat people either in traditional rows or cabaret-style. At the top of the building is a multipurpose room that hosts lectures, public gatherings, and even black-box dramatic productions.

The theatricality doesn’t end with the theater spaces, however. “We liked the idea of putting the audience members on display,” he says. Their “stage” is the lobby, its height doubled by jettisoning the second level’s floor slab. On one side of the lobby is the café, where letters rescued from the Strand’s 1959 marquee glow in pink neon. On the other side rises a white monumental staircase. It terminates with a balcony jutting out from a mezzanine, ready for an impromptu Juliet to call to her Romeo.