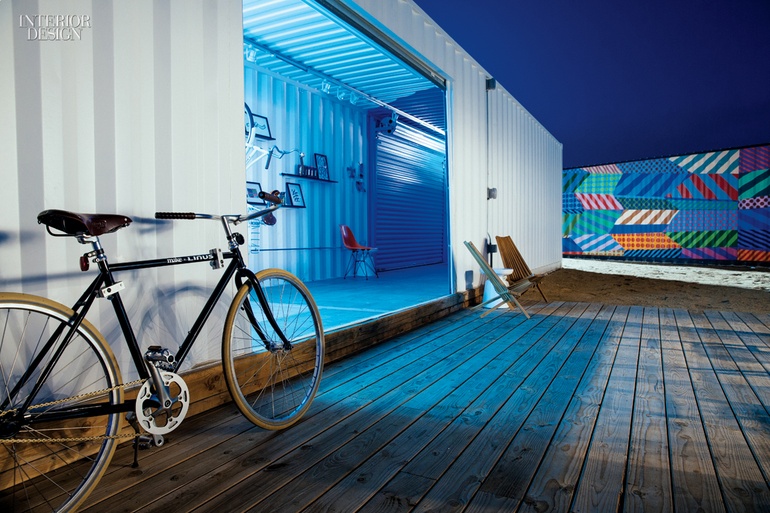 What do you do with a concrete warehouse when asked to convert it into multi-tenant office space? If you’re Rapt Studio executive creative director David Galullo, and the building is the San Diego International Floral Trade Center in the suburb of Carlsbad—blessed with a location near the Pacific Ocean, not to mention plenty of existing parking—you divide the single-story structure into two buildings, rename them Make, brand them, and develop all the marketing paraphernalia necessary to attract the tenants envisioned by the real-estate developer, Cruzan. “I hate the phrase, but we were thinking about the ‘next generation’ of creative offices,” Galullo says. “We had a blank slate, and we were looking to do something cool, to figure out a new way of working, living, and using space.”

A crucial early step was to come up with the name Make. As in: Tenants design and make things, say software or athletic wear. (Puma, Reef, and Callaway Golf Company offices are in the area.) Plugging into the maker movement that’s taken off across the U.S., Galullo envisioned tapping into synergies and a sense of community.

That desire drove his biggest intervention. Cutting an L shape out of the warehouse’s roughly square footprint by removing two perpen­dicular sections of roof, leaving only the overhead steel beams to provide structure while suggesting the past, he accomplished several things at the same time. One was to turn a quadrant of the original warehouse into a separate building. Another was to give windows to formerly internal spaces that now overlook the new pathways shared by all tenants. Where the pathways meet, he allocated space for a universal symbol of conviviality. Yep, the coffee bar. And it occupies an object that’s be­come the universal code for cool. Yep, the reclaimed shipping con­tainer. He furthermore commissioned a hip New York painter to “graffiti” its exterior with a psychedelic patchwork of colorful patterns.

Shipping containers have played various roles at Make, starting at the very beginning of the project. During construc­tion, he placed the coffee bar and a container housing the temporary sales office—equipped to offer renderings and proposals for different office spaces—on an island of elevated decking elsewhere on the site. Ultimately, the sales office’s container will be transformed into a gallery operated, as a satellite, by a tenant in the larger building.

Given the Southern California location, there are plenty of alfresco offerings. An amphitheater hosts meetings and film screenings. A paved expanse is dedicated to the parade of food trucks. “The next generation’s answer to the corporate cafeteria,” Galullo notes. The list of perks goes on to include a fire pit, an area for playing horseshoes, car-charging stations, and shuttle buses to restaurants and, of course, the beach. There are even outdoor showers.

For visual and functional connections between inside and outside, he punched out openings not only for windows and a grid of skylights but also for two kinds of disappearing doors, glass sliders and others that roll up garage-style. The doors give employees of different companies access to separate outdoor areas in addition to the shared zone around the shipping-container coffee bar.

Access to some of those separate areas is via slatted enclosures that wrap the corners of the buildings. “The wood is a second skin, an aesthetic layering,” he says of the reclaimed Douglas fir slats sourced in artsy Ojai. Beyond, the energizing landscape design evokes walkways and jogging paths. “We kept it easy and beachy,” he says. But he did bring in 100-year-old olive trees.