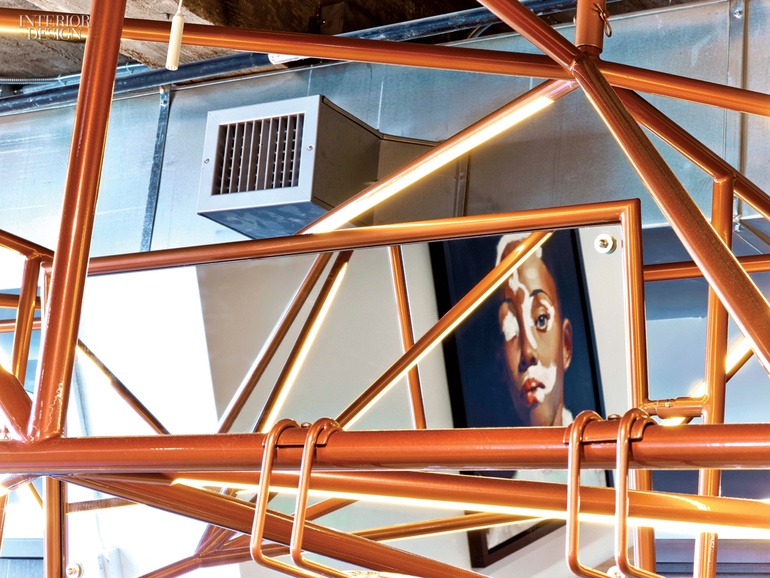 Talent agents in the 1980’s were Masters of the Universe in sharp-shouldered Giorgio Armani suits. Agency interiors mirrored that look, inspiring awe and perhaps sometimes trepidation. That’s how William Morris Endeavor Entertainment agents in New York ended up in what’s described, by all accounts, as “law offices.” Following the acquisition of rival IMG Worldwide, in a multibillion-dollar deal, the two sought to combine cultures, in the process sparking increased creativity.

The merged WME/IMG leased a full floor at a prestigious address, an art deco landmark tower. You enter it via a triple-height marble lobby. But then you jump off the elevator at 18 and immediately encounter black chevron-textured wall covering like a boutique hotel’s—the first clue that this office is the work of a hotel and restaurant specialist, the Rockwell Group. “Hospitality has such great strategies for creating space that’s welcoming,” David Rockwell says. In the same vein, the Interior Design Hall of Fame member and Greg Keffer, principal and studio leader, took a fine gray textile and reinterpreted it as a hard-wearing surface for corridor walls. The feel under your fingertips registers as silk, though the material is actually embossed vinyl. As Rockwell adds, “We’ve learned that design has to get more and more interesting the closer you get.”

Client-designer consensus resulted in the removal of virtually all trappings of a conventional office, from acoustical tile down to carpet. Mysterious traces of terrazzo and patches of other old flooring now peek through what turns out to be an old topping slab, ground smooth and sealed. Uneven board-formed concrete ceiling, never meant to be exposed, seems even rougher now that it’s featured in this archaeological fashion—the main exception being the internal private offices, where acoustical ceilings are seeded with recessed light fixtures. Similarly standard are the offices’ glass fronts, but the remaining three gypsum-board walls are definitely not corporate white. Rockwell and Keffer painted them in one of several moody tones. “The deep colors contrast with the neutral gray of the concrete,” Keffer says.

Keffer describes the overall aesthetic at WME/IMG as “rough yet pretty,” intended to flatter the occupants. “Keep in mind that every one of these agencies is competitive in terms of both staff recruiting and winning clients,” Rockwell says. “The space needed to make people look great.” Warm-toned metals are found, accordingly, in applications where you might expect stainless. At reception, ranks of brass pendant fixtures drop over a desk with a copper-plated top. (The front is glass, turning the desktop into a vitrine holding company memorabilia.) And polished brass hardware stands out against office doors veneered in ebonized oak.

Perimeter offices run along the two long sides of the vast floor plate, 85,000 square feet in an unusual bow-tie shape. Most of the space inside that ring went to workstations with minimal partitions, clustered on rugs with a hand-tufted feel. For a bit more separation, one free-floating section where assistants touch down is surrounded by a steel-bead curtain on an oval track—a treatment that the Rockwell Group originally developed for a hotel, the Cosmopolitan of Las Vegas. LED spotlights transform this curtain into a sort of theater scrim, easy to see out of while deflecting nosy gazes in.

At the cinch of the bow tie, an open demonstration kitchen with dining tables flows into a lounge with movie-screening capabilities, much as the kitchen, dining area, and living area might share space in a loft apartment. The kitchen’s gray marble island doubles as a buffet for the rotating chefs who serve subsidized breakfasts and lunches here daily. But the space will really cook if Bobby Flay or Tom Colicchio, both WME/IMG clients, makes an appearance. To give the audience a clear view of all the mixing and chopping on the prep surface, Rockwell and Keffer inserted tilting mirrors in the lighting truss directly above. In a bit of extra showmanship, one of the tall ebonized cabinets forming a backdrop to the island opens to reveal a camera-ready showcase of cooking implements.

Chefs are just one of myriad client categories at the agency. Literary business is managed by partner Jennifer Rudolph Walsh, who also spearheaded this renovation. It was her idea to let all the top executives furnish their own offices. Hers features four low armchairs upholstered in pale gray, grouped alongside wall-mounted shadow boxes holding books by her authors, such as Brené Brown of Power of Vulnerability fame. “That’s Amy Sedaris!” Walsh exclaims, jumping up to wave to a petite blonde outside the glass. “We’re passionate builders of influence at WME/IMG, and this office tells our whole story.” Then she mentions the desire to annex the level below. Time to write another chapter.