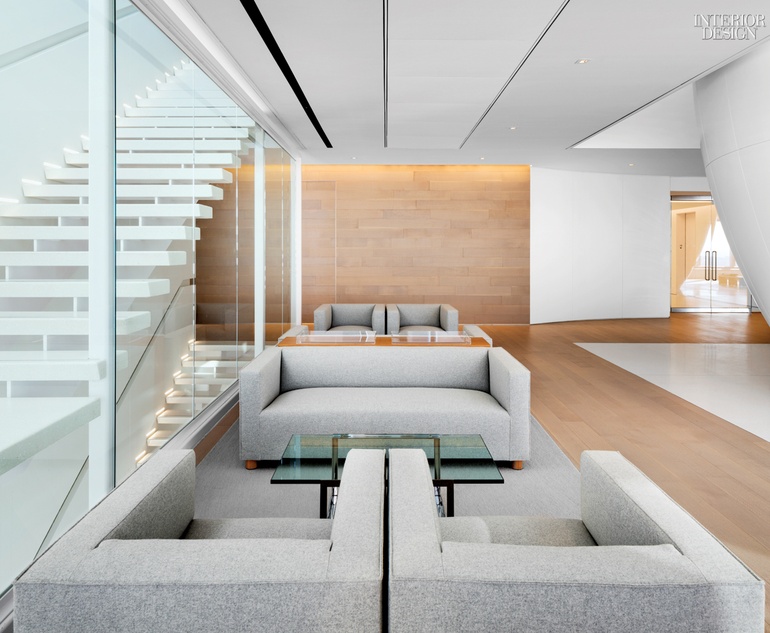 Lines stretched around the block to see James Turrell’s light installation filling the rotunda of the Solomon R. Guggenheim Museum a couple of years ago. But the latest Turrell in New York isn’t in a museum. To see this piece, you need to have business to conduct with this family-run office. Rising through its double-height main recep­tion area is Turrell’s enormous hollow egg shape, a chamber that required a laborious six-month process to construct from white solid-surfacing and concealed LEDs. Typically for this master of light and space, his mysterious conceptual sculpture alters our perceptions. Once you enter the egg and encounter the shifting colors inside, everything outside it looks different for a few seconds.

Like the Turrell, its surroundings make us see the world differently. A Manhattan office, it turns out, can be as graciously proportioned and serene as a Palladian villa. That’s thanks to the impressive real estate, 125,000 square feet on five levels of a brand new tower by Skidmore, Owings & Merrill, and even more so to the joint efforts of the two interiors firms, Shelton, Mindel & Associates and Architecture + Information.

Interior Design Hall of Fame member Lee Mindel relates the egg installation to the philanthropic work done by the client: “This is a metaphoric think tank. They really desired contemplative spaces, as opposed to some others that we all know of. That’s something beyond interior design.” A+I senior associate Sommer Schauer, recalling long client meetings to ensure that everything was perfect, adds of the president: “More than any other person of that stature that we ever worked with, he had the desire and ability to look at everything from big-picture concepts to details.”

One of those details is especially telling. For the entry to the reception area that holds the Turrell, the team received permission to actually carve out part of the elevator core to sculpt walls into a gentle curve that follows the egg’s. Value engineering was clearly not on the table. Schauer credits this subtle move with establishing “a hierarchy of space and intimacy.” When you’re standing there, looking up, the core-scoop indeed feels like a game-changing gesture, breathing humanity into the eminently urban rectilinear geometry.

“Space was the biggest luxury,” Mindel adds, demonstrating with his own wingspan that hallways are always well wider than someone stretching his arms out. “Not many people would pay for this kind of gracious circulation.” Sight lines stretch virtually uninterrupted. Relatively minimal furnishings add to the open feeling of what he describes as “an enriched environment,” referring to the white-oak flooring and the white terrazzo treads of the floating staircases, among many other touches.

As a result, the layout manages never to seem typical despite the standard overall plan of elevator banks at the center, conference rooms and the most senior solo offices at the perimeter, and smaller offices and swaths of desks between. Internal areas that don’t have natural light are illuminated with the help of what Mindel calls “almost-chandeliers,” basic linear fixtures assembled into snazzy configurations recalling Dan Flavin artwork. They’re housed beneath raised sections of ceiling made possible by concealing HVAC above the offices at the perimeter.

Those perimeter offices are designed to encourage employees to look at the stunning views. “We never lose the connection to the city,” Mindel says. Orienting the desks sideways, built into the dividing walls, minimizes visual clutter that might distract from what’s outside. Hugging the glass in each office is a deluxe window seat, a shorter version of the pale gray banquette that runs through the reception areas and other shared locations.

Geometries are remarkably thought-out. Woven into the main reception areas’s gray rugs, a quiet wave pattern echoes the longitudelike lines etched into the surface of the Turrell egg. Mindel and Schauer gave additional rationality to their plan by designating a color for each of the levels—in keeping with the theory developed by artist Josef Albers, also one of Turrell’s touchstones. The entry level’s collaborative spaces got green in various shades, since it’s closest to the earth below. Traders inhabit the “red” level, where hues run the spectrum from fire engine to an intense magenta that hasn’t been seen lately outside of Paris runways and gummy bears. When applied to chairs by Warren Platner or Ronan & Erwan Bouroullec, however, it clicks. And the top executives, highest up, of course, got royal blue as well as darker, richer woodwork. Mindel’s vision is that good ideas rise to the top, and you earn your way up to working among the more luxurious materials.

The bursts of color are kept in check by the conceptual rigor. Mindel has a particular genius for imposing order but not making it feel like a forced march. He even gave a talk to employees about how to take advantage of their new workplace. Don’t allow yourself to be confined. Do respect the generosity of space.