Elliott + Associates Architects Connects the Digital and Physical at ImageNet 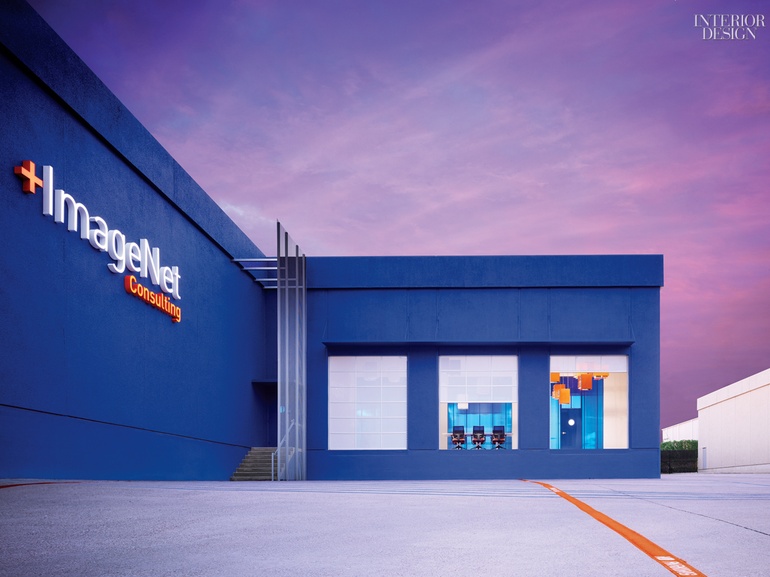 Every one of his projects tells a story. And every story starts with words. That’s the way Interior Design Hall of Fame member Rand Elliott’s process works. “My word paintings are my shorthand way of communicating with clients,” the ultra-talented architect, artist, and poet says. “I think about a project’s aspirational aspects in order to get its physical aspects right.” In the case of ImageNet Consulting, a company that has now been the source of seven Elliott + Associates Architects projects during a period of 35 years, generating 18 awards, the key words were recycle and reflect.

That had as much to do with the company’s profound sense of ecological responsibility as with the specifics of the business. Elliott calls ImageNet “my most entrepreneurial client.” Having started in 1956 in Oklahoma City as the Southwest Typewriter Company, it morphed over time to become an office equipment dealership, a printing concern, and finally a provider of information technology and data storage solutions to customers large and small—a hybrid offering both software and hardware.

A decade ago, ImageNet bought half of a precast concrete warehouse in the Dallas suburb of Carrollton, and Elliott came in to convert the space and get everyone settled in. His main statement for that initial effort was to channel the company’s IT emphasis by letting a tangle of data cables spill from the exposed ceiling. Then, with business booming, ImageNet bought the other half of the building, and Elliott signed on for phase two, reinventing the additional 9,500 square feet as training, demo, and office space. This remodel focused on organizing the interior as “a series of exhibits” that tell stories, he says. “ImageNet staff can take customers on a tour to talk about information management.”

Along the way, they would be amazed by Elliott’s creativity in transforming detritus into architecture. “With the notion of the paperless office, I was thinking about the waste generated by paper-based businesses,” he adds. “I was thinking about outflow.” Come along to see what he means.

Procession begins in the former loading dock, refashioned into a huge reception area that multifunctions as a conference room. Look up at the pendant fixtures—created by slicing off the bases of steel file cabinets, then wiring them for LEDs—and the metaphor is instantly apparent. “They represent the transition from storing information on paper to storing it digitally, in the cloud,” he says, noting that the cabinets are furthermore color-coded with paint. White represents documents in use, blue those searched for, and orange those lost forever.

Right before the doorway that connects reception to the office zone, he suspended an object of a different kind: a clear orange cube sporting a graphic white question mark. Where is your data stored? Can you find it? Is your staff as efficient as it could be? Those are crucial concerns for ImageNet’s clientele. While pondering, look through the doorway at the partition straight ahead. It’s composed of formed foam panels from the packing crates used to ship equipment—only now the white foam is spray-painted cobalt blue, the corporate color.

Next stop is the sales center, its offices fronted in similarly deep-blue glass on which vinyl text describes the company and its operations. If you continue down the corridor to its end, then turn left, you’ll find yourself in an alcove, potentially useless space that Elliott transformed into a celebratory moment, almost an altar. On a pedestal made with a stack of recycled paper, he placed a vintage typewriter—the company owns hundreds of them—while behind rises a glass panel swathed in the aqueous blue shrink wrap that protects ImageNet machinery.

“Turn around,” Elliott continues. The alcove is actually one end of the passageway that links the two sides of the building. At the other end is the training center’s anteroom, where there’s more trash transposed into design. Toner cartridges, those pesky elements so difficult to dispose of, have become wall sculpture, and the foam-panel idea is reprised in silvery paint. The cartridges carry through, inside the training center, as the components of a canopy lit from above. Shimmer likewise reappears, with walls covered in a reflective padded material more commonly used for insulation. “Note that glow in the corner,” he says, pointing to orange light coming through the doorway to the cafe. “We achieved that oven-hot color with nothing more than paint and gels.”

The tour ends on the far side of the orange café, at the video screening room. It’s dark, of course—thanks to walls covered in black bubble-wrap envelopes—but steeped in an otherworldly blue emanating from a bank of LED screens that enable presentations created with up-to-the-nanosecond technology. As if by magic, customers see images of their very own office as if it were already completely fitted out with the equipment proposed by ImageNet.