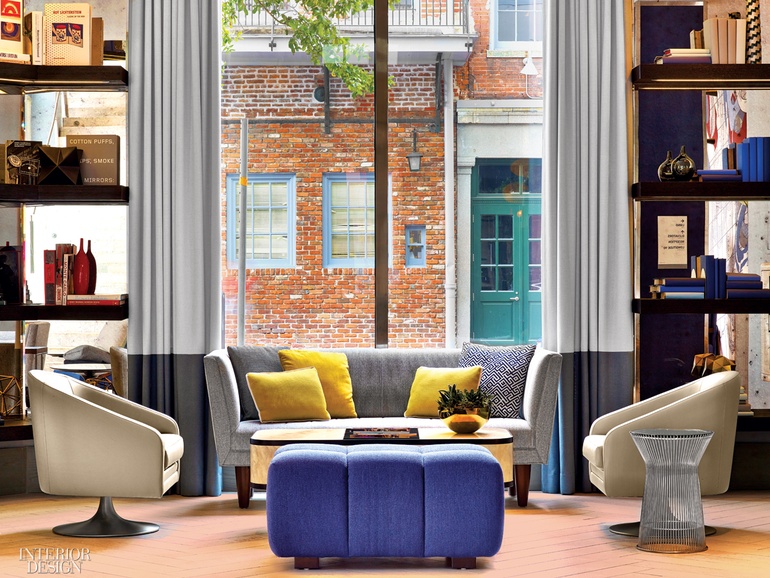 Nobody sane would recommend near-annihilation as an economic catalyst. But the fact is that it can be. For all the harrowing toll taken, Hurricane Katrina acted as a reset button for New Orleans, making it suddenly more dynamic and visible to the world. Waves of creative people have moved to town. Tourism has soared, along with the hipness factor. Urbane art galleries, restaurants, and hotels are sprouting everywhere.

At heart, though, New Orleans remains its dreamlike self, a lush Caribbean-flavored outpost animated by street music and chance spectacle. You can still turn a corner and encounter a walloping brass band or glimpse a lone man in an extravagantly beaded costume and purple headdress walking home, resplendent against tattered cottages. This fertile backdrop served as inspiration when two New Yorkers, Will Meyer and Gray Davis, designed their first hotel in the Crescent City.

The project is a makeover of the former W New Orleans. When the W’s owner, Starwood Hotels and Resorts Worldwide, decided to swap in another brand, Le Méridien, Meyer Davis Studio was asked to effect a metamorphosis, transforming the tired tower into a chic new player. Le Méridien New Orleans’s combination of modernist-influenced furnishings and contemporary art invigorates the reception area and the lobby lounge and is still going strong in the destination restaurant, the 20,000 square feet of events space, and the 410 guest rooms and suites. Decor is both assertively local and an expression of Le Méridien’s brand—reshaped, since its acquisition by Starwood, into a sensual, artful experience.

Under the guidance of Le Méridien’s global design director, Julie Frank, new or overhauled hotels are infused with mid-century Parisian influences, a nod to its French roots. Each property gets a bespoke playlist and a signature scent. Meanwhile, an individualized cartography motif underscores the romance of travel.

At Le Méridien New Orleans, music thrumming 24-7 is a mix of French 1960’s cinema soundtracks and sexy bossa nova, and wafting through the lobby is a scent based on the smell of leather-bound books. Everything speaks the same silky yet crisp language: the Jean Prouvé chairs; the color scheme of French blue, dove gray, and canary yellow; the carefully harmonized mix of unmatched materials. “It’s important that a project look seamless, from the architecture to the interiors to the art,” Davis says. “We love an interior to have a real ease about it.”

That ease comes from Meyer and Davis’s confidence and wit. They chose a relatively unknown New Orleans artist, Avery Lawrence, to highlight throughout the hotel. Several years ago, Lawrence was still making ends meet by pedaling tourists around the French Quarter in a pedicab. “I would pick people up at the old W,” he recalls. “I certainly never imagined painting a mural on the facade.” Now he’s done just that, and his whimsical silent video Arranging Suitcases loops on screens in the porte cochere and near the elevators, depicting him as a Charlie Chaplin–esque protagonist who seduces an armchair, among other exploits. The video’s props have furthermore migrated off-screen and into the public spaces, in three dimensions. In reception, a blue steamer trunk like the ones in the video now serves as a pedestal for what Lawrence calls a “stationary bibarisousaphone,” the love child of a bicycle and a tuba.

Such high jinks are balanced with cool glamour. Lobby lighting includes a pendant fixture resembling drummers’ mallets. Bends in the Mississippi River inspired both a sinuous banquette and, rising behind another seating group, a squiggly black-and-white wall covering.

This vivid pattern-making resulted from the collaboration between Meyer Davis and Frank’s global design group. Together, they enlarged New Orleans maps and symbols, rendered so abstract as to be startlingly contemporary. Riverlike white lines, sweeping across the walls of guest corridors, incorporate the blithe lyrics of Louis Armstrong. Right inside the suites, foyers are surfaced with an amplified map of a Mardi Gras parade route, complete with clustered dots to represent the places where people congregate to watch and catch the colorful beads. These graphics are so mysterious that the average guest doesn’t know what to make of them at first glance—all perfectly intentional. “The bellman bringing up the bags might explain. If not, they’re beautiful patterns that can stand alone,” Frank says. The carpet pattern is a blown-up, pixelated fleur-de-lis, the Francophile city’s unofficial symbol. Headboard walls are stacked molding profiles, meant to evoke not only the splendors of Paris but also the proud Creole plasterwork in Garden District mansions.

Meyer and Davis had their most authentic New Orleans experience after their work was done. Their plan was to pop down from New York for only a brief appearance at Le Méridien’s grand opening soiree, after which they raced to the airport to find that their return flight had been canceled. So they headed back to the hotel. “This being New Orleans,” Meyer says, everyone was still partying—and continued to do so until the plane departed the following day.