Bauhaus-Style Cape Cod House Gets A Guesthouse by Hariri & Hariri 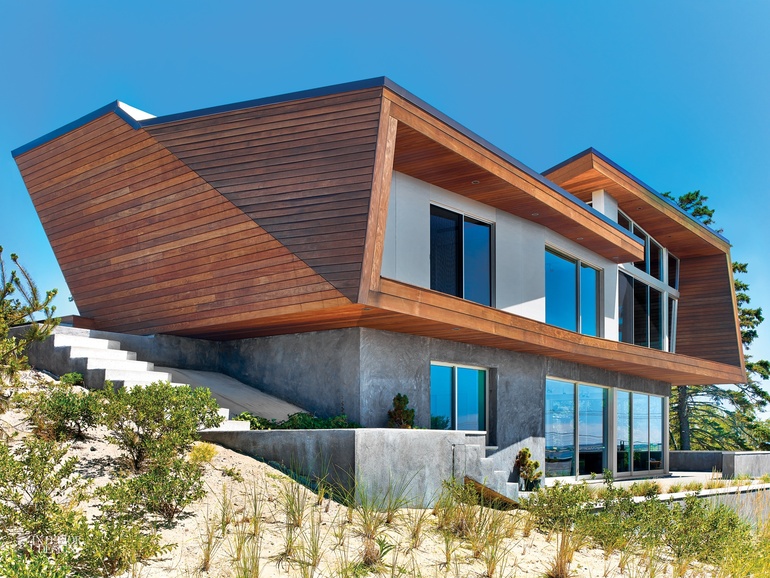 Geographically exquisite Provincetown, Massachusetts, is a thin strip of low-rise buildings at the curved tip of Cape Cod. Few houses are more than two blocks from the harbor. At the far end of town, on a dune facing a salt marsh and a mile-long stone breakwater, stands a masterwork of 20th-century architecture—and its young cousin by Interior Design Hall of Fame members Gisue and Mojgan Hariri.

In the 1930’s, Clark University psychology professor and publisher Carl Murchison and his wife, Dorotea, moved to Provincetown. After the Murchisons’ house burned down, they commissioned the Architects Collaborative, led by Bauhaus founder Walter Gropius —who had been visiting the Cape for years—to build a spectacular new one. They completed it in 1959. Four years later, Gropius wrote a public letter to the advisory commission for the newly designated Cape Cod National Seashore, urging the U.S. government to adopt modernist designs for the park’s visitor centers. “Here is the opportunity to make architectural history for ourselves by designing in unmistakable terms of our own period,” he argued, adding that to keep “reviving revivals” would be to “confuse the art of architecture with archaeology.” Carl Murchison kept a copy of that letter. After his death, when his heirs sold the house, the copy of the Gropius letter passed into the hands of the new owner, entrepreneur Cliff Schorer.

Despite Provincetown’s famous tolerance for progressive thinking—ever since Vikings, Pilgrims, whalers, and Portuguese fishermen gave way to summering New York bohemians such as Eugene O’Neill and the Provincetown Players in the World War I era followed by painter Edward Hopper, writer Norman Mailer, hippies, and a historic gay community—the town still has little contemporary architecture. But when Schorer commissioned Hariri & Hariri Architecture to build a guesthouse for his Gropius residence, there was no hand-wringing about blending in. Schorer and the Hariris, who are sisters, all read that Cape Cod National Seashore letter as a rallying cry to pull the town into the 21st century. “This very inspired client,” as Gisue Hariri describes Schorer, talked of a design that would be “revolutionary yet livable.” Given his passions for architecture, furniture, and art, she adds, “We knew if we tried hard, we could create something amazing.”

The result presents a fresh face to those who will see it every day perhaps while walking on the breakwater, an object of fascination to the Hariris. “We thought of rocks washing off it and landing on the beach to form our guesthouse,” Gisue Hariri says. However, the most important influence of course came from Gropius’s rectilinear forms and neutral materials, studiously adapted and incorporated. “We used finishes similar to those of the original house—gray, a taupe-y tone, and dark wood,” Schorer says. Grays include the charcoal-colored stucco on the retaining walls below the guesthouse, the polished concrete flooring on the lower level, and the aluminum framing the windows. For wood, the Hariris obliged with Brazilian ipe, which both wraps the exterior of the upper level and lines its interior.

Because the property comprises not only the flat-roofed Gropius house but also an earlier gabled gatehouse, Schorer asked the Hariris to do “something transitional” with the guesthouse’s roof line. Hence the ipe wrapper’s hairpin shape, essentially a parallelogram with a broken pediment that’s created by another Gropius element, a clerestory. This one adds height to the window wall of the master bedroom. Meanwhile, the master bathroom’s smaller window is tucked into an ipe-clad recess on the side of the guesthouse, carefully blocking the sight of a neighboring motel.

Inside the master bathroom, ipe continues for flooring and for paneling that’s folded and faceted. It’s as if to say, as Gisue Hariri puts it, “This is a rock that you’ve carved, and it’s cavelike and cool.” Mojgan Hariri has the opposite vision: “The wood makes it very warm, almost like a Swedish sauna.”

Also following Gropius’s lead, the Hariris buried part of the lower level, taking advantage of a significant elevation change from front to back. The 2,400-square-foot guesthouse therefore scans as a relatively modest single story on the approach. Only afterward do the living and dining areas appear, down the slope. The double-height living area’s soaring fireplace wall, surfaced in the same gray stucco found outside, likewise takes a cue from the Gropius fireplace.

The Hariris say they were humbled and thrilled to be working from his Cape Cod National Seashore manifesto. Together, they and Schorer reflected on how important it was “to respect the architecture of a place but at the same time push forward to our time,” Gisue Hariri says. That’s something the three will keep in mind when discussing the other four guesthouses proposed for the property.