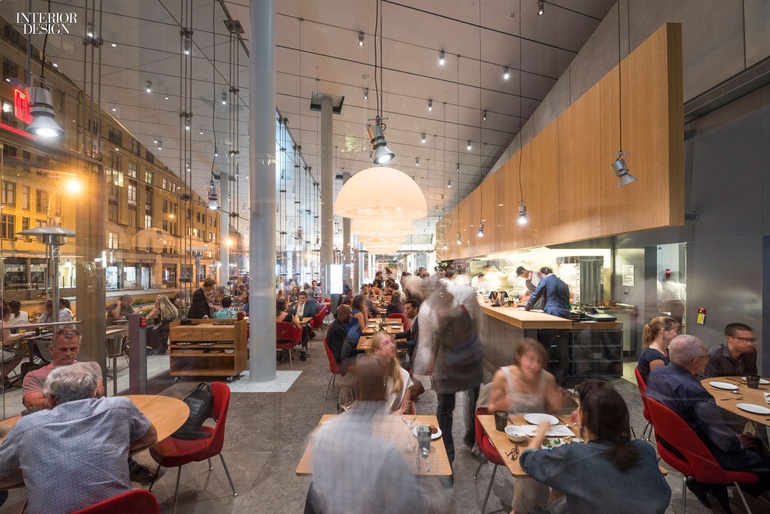 It’s no surprise that SoHo, the Lower East Side, and Williamsburg have eye-catching eateries. But Midtown? Several of our top picks are right in the center of the city’s hustle and bustle. Dig in.

Standout: The original mahogany doors, wainscoting, and flooring were restored at this New York and federal landmark, while a gold-leafed bar, velvet-upholstered seating, and Eric Schmitt’s oversize ring chandeliers were added.

Standout: What started out as a truck in 2008 has expanded into three bricks-and-mortar shops plus this new 1,150-square-foot flagship, its palette of honed Thassos marble, white oak, and pale peach inspired by the colors of the ice-cream flavors.

Standout: Vintage Italy is expressed via an envelope of rich woods and sienna and cyan colorways, populated by mid-century furniture and a marble-topped central bar.

Standout: French blue is the color hand-painted, in different patterns, on white wall tile to differentiate dining and retail at this Francophile mega-emporium.

Standout: Tranquility begins at the bamboo entry garden and continues through to the minimal interior’s original brick walls and polished concrete floor.

Standout: A former meatpacking plant now sells coffee from a Colombian company, its story told by a roasting facility at the entry and the café’s coffee-plant wall.

Standout: For the U.S. debut of a Beijing burger joint, green-painted plywood frames, suspended from the ceiling, are meant to evoke lush pastures.