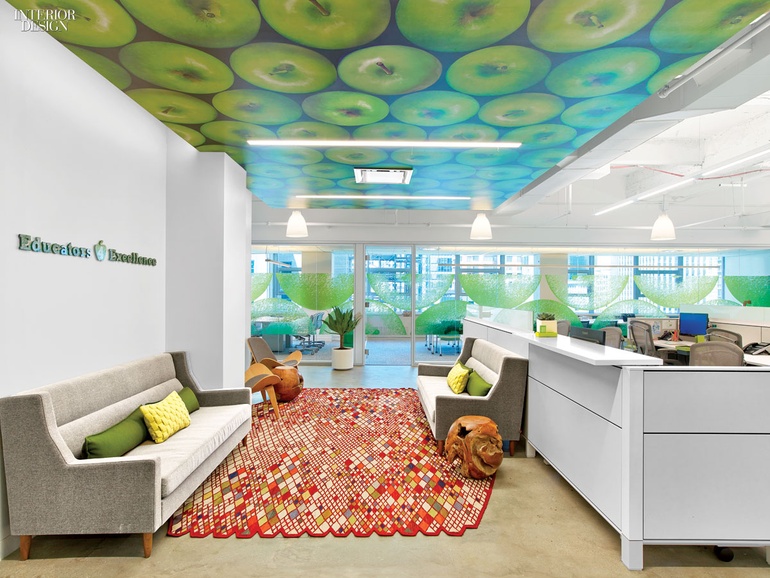 A visual storyteller. That’s how Kati Curtis likes to think of herself. “Conveying the stories of the people who work in a space is essential to what I do,” Curtis explains.

For the teachers’ advocacy nonprofit Educators 4 Excellence, the plot line really took off at Chicago’s NeoCon contract trade show—with Curtis and Educators 4 Excellence cofounder and co-CEO Sydney Morris strolling the Merchandise Mart to check out the new wares. When Morris was drawn to a playful stool that looks a little like a green-and-white mushroom, Curtis says she was sure that was a good omen: “This is a very serious, very focused group. So it was great to know that I could inject elements of fun into the design.”

Back in New York, as Educators 4 Excellence prepared its move to a much bigger office, 13,500 square feet in the financial district, Curtis evaluated the current office for more clues. “This is what we are always trying to do, figuring out how we can articulate a brand architecturally,” she notes. This time, she took inspiration from the organization’s chalk-scribbled bright green apple logo. She then decided to make the color green, in general, the element that threads through the entire space. She sought out a mixture of different shades—but nothing too yellow or too blue. “The greens don’t match perfectly, which really goes along with my underlying design philosophy,” she says.

As the space came together, she tried to come up with something that would take the design to another level, something that would grab visitors the second they got off the elevators. “There were so many hard edges and clean lines,” she says. “They needed a cheeky note.” And that was when the vision flashed through her brain. She’d cover the ceiling of the elevator lobby and the reception area with supergraphics of Granny Smiths, so large-scale they blow you away.