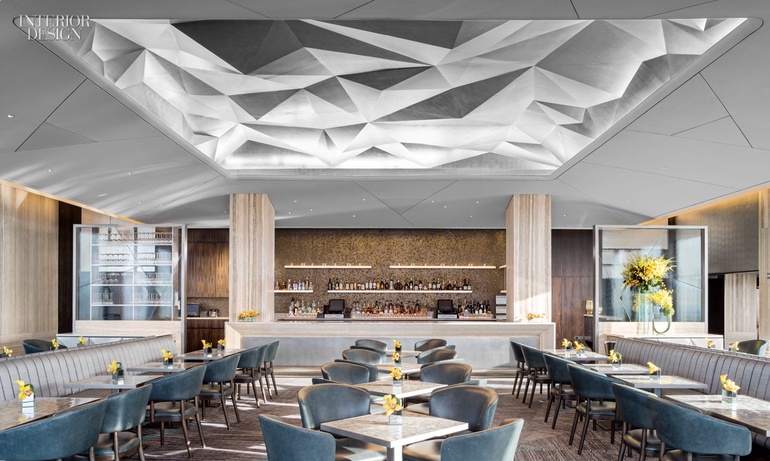 In 1934, when the Rainbow Room opened, it was one of the first dining and dancing establishments atop a skyscraper, the newly completed 30 Rockefeller Plaza in Midtown. Like the Fred Astaire–Ginger Rogers movie musicals featured throughout the decade at neighboring Radio City Music Hall, the cloud-borne supper club embodied the big-band era before World War II. The public, battered by the Great Depression, escaped into silver-screen fantasies of dressing up and “steppin’ out, my dear, to breathe an atmosphere that simply reeks of class,” as the Irving Berlin song from Top Hat put it. The Rainbow Room was perhaps the only place in New York that fully lived up to that giddy movie-inspired vision—perfectly enough, in fact, to serve as the model for the Club Raymond in the Astaire-Rogers picture Swing Time.

Conceived as a kind of high-rise billboard to promote Rockefeller Center, the Rainbow Room was designed by Associated Architects under the supervision of architect Wallace K. Harrison and interior designer Elena Bachman Schmidt. Future film director Vincente Minnelli, then a set designer at Radio City, served as color consultant. The double-height space, done in the streamlined moderne style, featured a round revolving dance floor, above it a two-tier dome containing a crystal chandelier, sconces to match, dining tables on platforms at the perimeter, and windows that took full advantage of the skyline panorama. Playing across the dance floor and the dome, lights changed colors synchronized to the music, an effect that gave the Rainbow Room its name. It never completely lost its café society aura in the transition from ’30’s supper club to ’50’s cocktail lounge to ’80’s dinner and event space, the last involving an extensive renovation by Hardy Holzman Pfeiffer Asso­ciates. But during the Great Recession, ironically, this Depression-era legend closed its swellegant doors. They remained shut for five years, a period during which the interior was officially landmarked.

An even more extensive renovation of the Rainbow Room—this time by Gabellini Sheppard Associates, the firm that already masterminded the Top of the Rock observatory upstairs—headlines the reopening. But that 4,900-square-foot project is just the beginning. Interior Design Hall of Fame member Michael Gabellini and Kimberly Sheppard crossed the Rainbow Room’s threshold to design the unlandmarked adjacent spaces. At the opposite end of the 65th floor, 2,900 square feet and a terrace became SixtyFive, a private lunch club that transforms into a cocktail bar in the evening. A long gallery, connecting those two venues to function as a shared reception area, and luxe restrooms, complete with lounges, add up to 2,900 square feet.

The updated Rainbow Room is still evocative of ’30’s white-tie-and-tails elegance. “We maintained the room’s existing configuration while making material alterations to the floor, ceiling, and wall surfaces, most of which had been replaced in various renovations over the years,” Gabellini says. Chief among these was the revolving dance floor. “The third, not the original,” Sheppard notes. The same family of woodworkers who handled the previous iterations re-created the floor in rosewood, teak, and wengé, extending the “compass rose” design nearly all the way to the bronze-ringed edge. Above, the ceiling dome is resurfaced in squares of aluminum leaf that have been patinated to look like white gold. Concealed LEDs paint the dome with rainbow colors or create myriad other effects.

Descending from the dome’s center, the chandelier has been restored, its damaged crystals replaced and its silver-plated frame refinished. Ditto the matching sconces between the windows—curtained with strands of crystal prisms to add to the dazzle. “It’s theatrical,” Sheppard says. “Shimmering veils refract sunlight during the day and add to the city’s glitter at night.” For an answering glint, she and Gabellini illuminated the restored railings in hand-rubbed antiqued bronze, with their distinctive balusters made of stacked crystal globes. Everything is lustrous and pearly: pewter-tinted mirror, softly metallic fabric wall covering, carpet in muted silver wool-nylon.

A subtle palette, sumptuous materials, and complex surface geometries make SixtyFive, although unapologetically contemporary, feel like the Rainbow Room’s younger sibling. “The first thing we did was heighten all the windows, which had been reduced to a low horizontal band of glazing in the ’80’s,” Sheppard says. That opens up the view of the terrace and the majestic Hudson River beyond. Since the space was originally an open-air sun parlor, she and Gabellini installed a faceted ceiling that can be lit to evoke the sky. Those angles are echoed by the bar’s hammered stainless-steel front, a wall of textured bronze mosaics behind, even the carpet pattern.

Finessing the transition between SixtyFive and the Rainbow Room is the gallery. “The three together are meant to evoke a luxury ocean liner,” Sheppard says. It’s as if the restaurant were the ship’s prow, the club the aft saloon, and the gallery the observation deck. And what a vista. Another peerless monument of the ’30’s, the Empire State Building, seems close enough to touch.