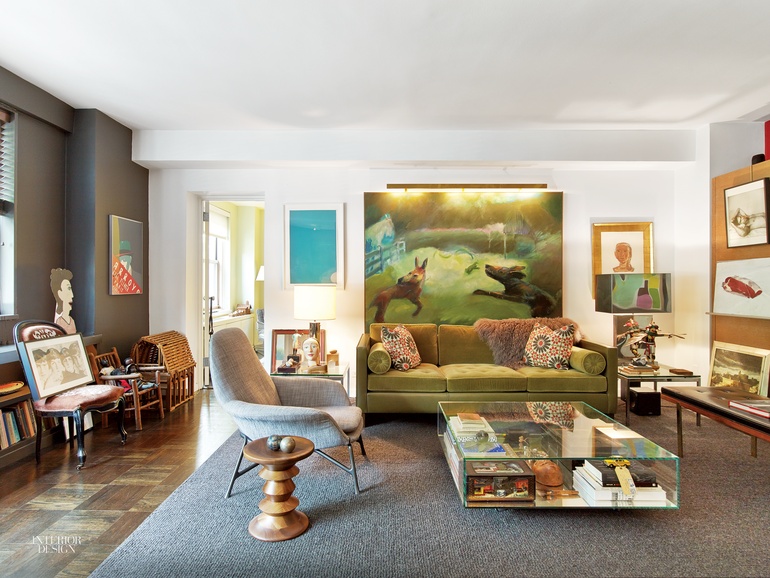 John Bricker’s apartment is designed according to the most rock-solid principle there is. “Any good interior should express the person behind it,” Bricker says. That’s not an abstract idea for him, as a Gensler creative director and principal who specializes in retail projects.

He has filled his West Village one-bedroom with family heirlooms, travel souvenirs, artwork, and books that speak to him. And speak volumes. As he puts it, “This place expresses my point of view.”

Never cluttered, the result is nevertheless brimming with personality. “It’s an evolving story of places I’ve been and experiences I’ve had,” he says. Evidence of trips to India, Japan, Costa Rica, and Brazil abounds. On the art front, he has collected everything from a beaux arts figure drawing to large contemporary paintings of dogs and a photographic portrait of a drag queen that once appeared in a Gap ad. Furniture that appeals to him runs the gamut from a sideboard made for a Victorian kitchen to the 1980’s glam of John Hutton’s klismos chairs.

Bricker is not an architect. However, he made small but important modifications in the compact but gracious 850- square-foot layout, a 1950’s imitation of a typical prewar apartment—part of an addition to a building constructed by the legendary developer Bing & Bing. In basic terms, the apartment’s public areas occupy a square, along one side of which a narrower rectangle contains the bedroom and bathroom. Because the foyer lacked definition, he built a divider in the form of a high oak cabinet that extends across to block sight lines from the front door. “You don’t want to walk in and immediately feel like you’re in the middle of the living room,” he explains, adding that he established a stylistic separation by painting the foyer’s other walls a color called Smoldering Red. “It glows.”

The other fix involved the short hallway that connected the bedroom to the bathroom, on one side, and a walk-in closet, on the other. Because there was already a door to the hallway, he could remove the doors to the bathroom and closet, blow out a small section of wall to enlarge the closet’s doorway, and thereby transform the three separate small spaces into a proper dressing room. It’s now full of the Martin Margiela sneakers and denim shirts that Bricker favors—with a little Hèrmes thrown in, as the rows of orange boxes reveal.