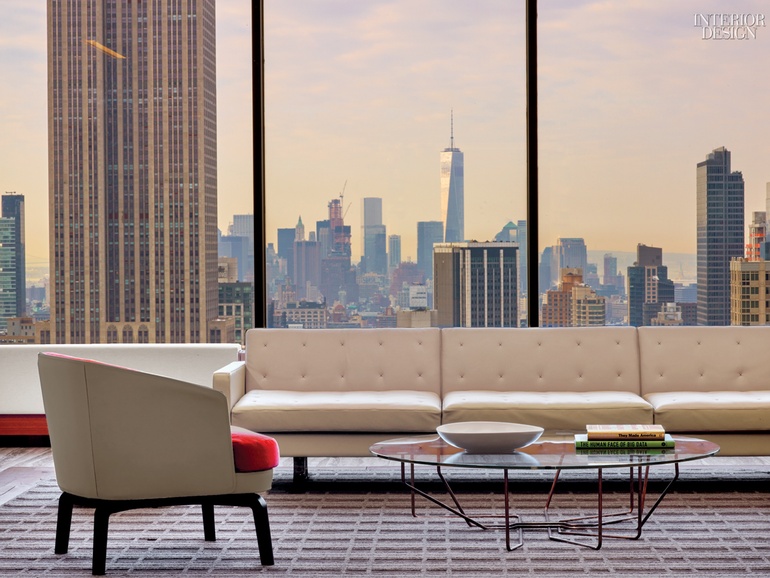 The big swoop of Gordon Bunshaft’s W.R. Grace Building landed in Midtown at a pivotal moment. By the early 1970’s, Ludwig Mies van der Rohe’s boxy modernism had fallen out of favor. Firms such as Bunshaft’s Skidmore, Owings & Merrill were attempting to engage the city with a fresh brand of mod, one marked by purity and invention. The Grace Building’s convex facade, with its grid of white travertine, was a departure from the tired towers of recent years, and the lobby, an expanse combining travertine with sea-green marble, became the standard of corporate luxe. Decades later, the excitement of Bunshaft’s form still draws oglers. It recently lured SmithMaran Architecture + Interiors’s Ira Smith and Erik Maran, conducting a site selection tour for Insight Venture Partners.

Checking out the 36th floor, the designers saw a near-perfect opportunity for Insight’s venture-capital and private-equity specialists to distinguish their culture—elite, never elitist—and their brand—tech-focused value creation, baby—in a super-competitive marketplace. The 32,000-square-foot floor plate, the river-to-river view, and the lively location on Bryant Park were all equally appealing. Even better, Insight cofounder and managing director Jeff Horing agreed with Smith and Maran that the new interior should harmonize with Bunshaft’s celebrated design.

Nevertheless, there were a number of challenges to resolve. First, Insight was looking both for uptown polish and for the trendy allure of a downtown hotel lounge. Another dilemma: The goal was an open, sunny setting, but private, acoustically isolated spaces had to be carved out for the top executives and for clients attending confidential powwows. Most critical, the low ceiling, typical of ’70’s towers, impinged on a billion-dollar panorama starring landmarks from the Chrysler Building to a much newer SOM project, 1 World Trade Center.

Unfazed, Smith and Maran returned to two principles that mark everything the firm designs. “Amplitude and resonance,” Smith says, with a smile. “Amplitude is all about opening up borrowed space. Resonance describes the gestures that repeat, morph, reappear, and assimilate.” Those two ideas are instantly recognizable at the Insight office. For example, the refined exuberance of Bunshaft’s curving facades is recalled by an undulating ceiling that curves up as it approaches the window walls—for what Maran calls “a sense of continuous lift at the edges.” Where the ceiling descends, it appears to rest on an extensive organizing framework of walnut posts and beams. While adding intimacy, the beams provide a horizontal datum line for subtle detailing: cove lighting, mirror, paneling, and painted finishes. The result is composed but, at times, theatrical and surprising.

The quarter-sawn walnut veneer, the rift-cut oak, and the floor’s sections of oak reclaimed from Amish barns also present a striking counterpoint to the palette inherited from Bunshaft. SmithMaran emulated his travertine—honed and filled on the floor, unfilled for vertical uses—but chamfered the edges and set the slabs in carefully toned compositions of oak, pinstripe-veined marble, and distressed steel. (The elevator lobby is exceptional in its detailing and proportional rigor.) Other touches, from distressed steel to industrial-strength velour, create visual and tactile range. To deal with the privacy-transparency quandary, Smith­Maran deployed an engaging array of glass partitions that leave sight lines long and uninterrupted. Frosted glass tops workstations for visual texture and, where needed, seclusion. Private offices’ storefront system combines delicate glazing with slender jambs and sills of squared-off raw steel and hefty doors in slip-matched walnut veneer. Where the ceiling lifts away from the flat-topped gypsum-board walls between offices, curved clerestories add sensory and volumetric appeal. And an angled part of the boardroom’s glass front seems to knife through a credenza.

To balance the seriousness of finance with the desired dowtown groove, SmithMaran worked its mid-scale savvy. Built-in benches and banquettes, mirror, and linen wall covering contribute a sense of hospitality too often missing from today’s office interiors. Seating sports carefully selected fabrics and leathers. Everything projects seriousness, but nothing is heavy. Even the workstations are clean-lined and modish, floated not quite 1 inch above tastefully patterned carpet tile. Everything seems to suit the congenial workaholics who are drawn to the data-crunching, risk-prone universe of venture capital and private equity. “For our staff, portfolio companies, and investors, we needed something that was impressive and welcoming but not ostentatious or trendy,” Horing says. “My hip L.A. counterparts love it.”

It’s furthermore a true original, melding SmithMaran’s decades of interiors experience with an admiration for modern architecture. “Ira and I were taught by modernists in a classical method,” Maran says. “We learned that the built world is a product of historical, social, and economic forces, and we must respond to them all.” That lesson was key to the undergraduate architecture program at nearby Columbia University, where Smith and Maran first met.