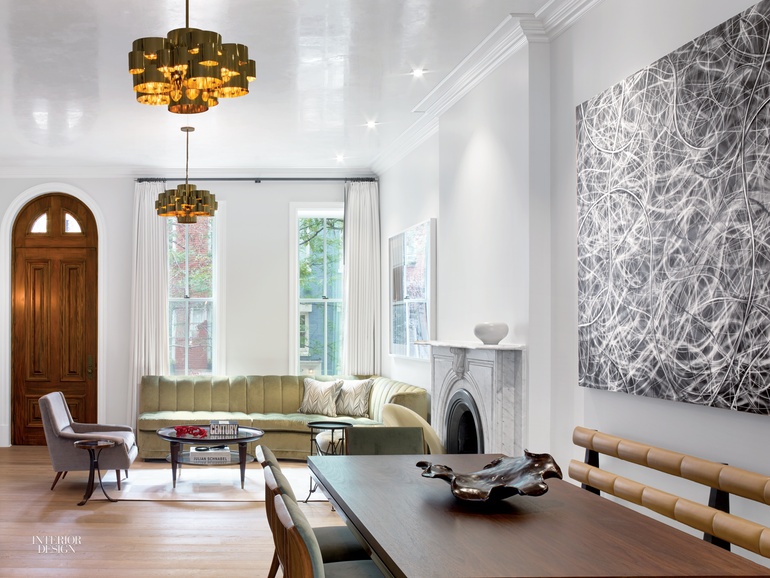 While Manhattan apartment towers climb ever taller, into the sky, some New Yorkers still dream of a single-family town house on a tree-lined street. Offering respite from the hurly-burly, such houses are unfortunately not easy to come by. Approximately 3,000 of the island’s nearly 900,000 residential units are town houses.

The owners of this brownstone, a financial executive and his wife, found it on one of the West Village’s best-preserved streets. The property itself, however, was a diamond-in-the-rough to say the least. One of five identical houses built in 1869, it was nearly moribund, chopped up into eight studio apartments. Any original architectural details, including a front stoop that would have led to the parlor floor, had been stripped off decades ago.

After buying this fractured piece of history, the couple hired Mark Zeff to transform it into a comfortable home for themselves and their two children. His firm, known as Markzeff, had already remodeled several projects on the same landmark-protected block, and he clearly knew the pitfalls of a gut renovation there. The couple were also construction veterans. After all, their first home had been a loft in a converted button factory.

Conjuring up a contemporary interpretation of a classic town house took place over a period of three years—much of it spent applying for permits from the city’s Landmarks Preservation Commission, then appealing its decisions. While there was no problem getting a permit to restore the front stoop, there was some administrative pushback on Zeff’s proposal to add 4 feet of depth to the back of the house. Ultimately, he prevailed. The next steps were the demolition of all four existing levels and the excavation of the cellar to give it a more livable headroom. “We tore out the entire interior and started over, making the house work for a young family living in the 21st century,” he says.

Row houses are notoriously dark, since sunlight enters only at the front and back. On the landmarked front facade, he was restricted to simply installing period-appropriate sash windows. The rear addition is another story. For each level, he designed a window so large that it basically amounts to a glass wall. The iron frames have a retro commercial feel, harking back, he says, to the 1920’s, and the ensemble functions beautifully to brighten the rooms.

He decided to ignore precedent for the parlor floor, which he opened up into living and dining areas that flow, with the least possible interruption, into the kitchen. “Few people now really use a formal dining room except for family holidays two or three times a year,” he says. It’s also more functional to keep food prep on the same level as dining, versus having the kitchen below-stairs as it would have been in the days of servants, when these houses were built.

In keeping with the couple’s former loft home, he used 12-inch-wide oak floorboards, which continue from the living-dining zone through the kitchen. “I like wood floors in kitchens,” he says. “I do not like breaking up an open space with a lot of different flooring materials. That only makes the space look smaller.”

He also forswore typically Victorian plaster flourishes on the walls and ceilings. Instead, he opted for unfussy neoclassical crown molding and used a Venetian plaster on the ceilings to create a high-gloss finish that turns up the natural light. Furniture is pared down to a clutter-free minimum. “You know, these houses are not that large. The inside width here is 17 feet with a maximum depth of 64 feet,” he says. “Unless you want to be stepping around furniture all the time, less is really more.”

Bringing the house’s total square footage to 4,000, the excavated cellar now holds a gym, a powder room, a laundry room, storage, and mechanicals. The garden level, directly above, retains its street entrance, under the stoop, after which come a mudroom, a large family room, and a media room that can multifunction as an office or a guest room. The first bedroom level is given over to the master suite, where the bedroom is dominated by a headboard wall in channel-quilted brown velvet, the bathroom by cement floor tile made using a 19th-century technique with the floral pattern poured into the framework before drying. Two layers of floor-to-ceiling curtains, both shears and blackouts, operate on a track recessed into the ceiling of the bedroom, while blinds disappear into the ceiling above each of the three sash windows in the bathroom. As for the top level, it consists of the children’s two bedrooms, separated by a lounge. This shared space is the only one in the house with exposed brick, a favorite design conceit in the West Village.