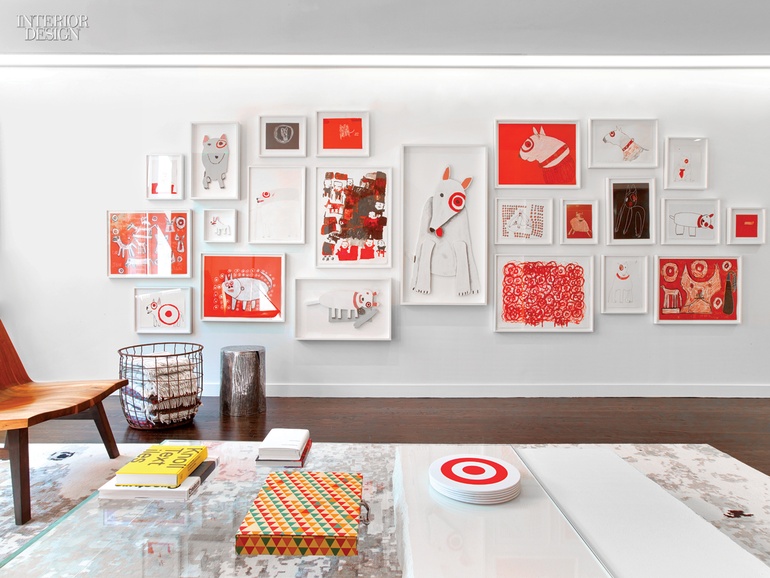 No slouch when it comes to branding, Target Corporation has made its mark with stores awash in vivid red and tattooed with the company bull’s-eye logo, an icon since being introduced way back in 1962. A Target store, to say nothing of a SuperTarget or Target Greatland, is the place to buy jugs of Clorox and Sterilite 56-quart plastic storage bins in most of the U.S.—just not most of Manhattan. Aside from a single location, in a remote corner of Harlem, the borough remains quite possibly the final U.S. frontier when it comes to “expecting more and paying less.”

Not to imply that the Minneapolis-based retailer lacked a corporate presence entirely. Target had a Midtown office, but those high-rise digs were far from ideal for hatching out-of-the-big-box branding campaigns. “It really felt right to relocate to Chelsea,” chief creative officer and senior vice president Todd Waterbury says, speaking of the landmarked 1910 redbrick warehouse where Interior Design Hall of Fame member Lauren Rottet built out 15,000 square feet for Target’s public relations and marketing teams. Mid-block among Chelsea’s galleries, the office is flagged only by a small bull’s-eye banner, relatively subtle in black-and-white. Compared to Target’s stores, this is a veritable “blank canvas” in the parlance of art-world neighbors. “It’s casual, not in-your-face Target,” Rottet clarifies. That was Rottet Studio’s approach to the interior, too.

It starts right at street level. Formerly home to a gallery, a storefront space presents public events such as a Target Too interactive video featuring a gigantic mosaic of lips composed of scads of red-and-white tubes of lip balm. Visitors on official business can enter a modest adjacent lobby, then ride the elevator to two.

The doors open to a rift-sawn oak reception desk that Rottet describes as “super-friendly—very, very welcom­ing, not corporate.” Over near the windows, she configured the waiting lounge, and the company’s visuals team added accessories. A wire basket filled with carefully folded Target throws exemplifies what Waterbury describes as “warm and cool.” Over a sofa by Rodolfo Dordoni, Rottet hung an outsize rendition of the company logo, handcrafted from red yarn and nails. (This string-art piece, created for an event, had been languishing in the old office’s storage room.) A suspended ceiling floats away from the walls, partially revealing white-painted joists that embody the building’s industrial past.

Target’s own past is filled with design milestones. As lead sponsor for the restoration of the Washington Monument in 1996, the company recruited Hall of Fame member Michael Graves to the effort. Three years later, Graves inaugurated Target’s Design for All initiative. Others wanted in, and subsequent collaborators have included Missoni and Liberty. For Target-brand home items, an Ugly Betty–ish pop aesthetic has mellowed, lately, into a softer artisanal modernism. Rottet’s interior, which Waterbury calls Target’s living room in New York, is key in the creation and dissemination of that message.

For fashion shoots and media launches, she provided a pair of large, naturally lit studios flanking the office’s circulation spine where it extends from reception. The two studios are fronted by accordian-fold doors in frosted glass, offering acoustical and visual privacy when several events are simultaneously in full swing. At roughly the midpoint of the spine, in a break-out area just outside the pantry, stools line a counter built into a wall veneered in walnut enlivened by colorful abstractions. Thirsty? The pantry’s stainless-steel refrigerator is stocked with Target’s own Market Pantry reverse-osmosis drinking water.

Even in the pantry, flooring is the warehouse’s existing wood strips, carefully repaired or replaced where necessary, then stained—a more expensive process than laying down something new, Rottet admits, but also far more authentic. For furnishings, she mixed modern classics with contemporary pieces. In the lounge that occupies the rear portion of the circulation spine, one seating group includes a clear acrylic chair by Interior Design Hall of Fame member Vladimir Kagan and a tufted leather-upholstered sofa by Carlo Colombo. A Kagan armchair, this time in leather, and Antonio Citterio’s sectional welcome visiting talent to the green room, adjacent to a salon for hair-and-makeup. On the opposite side of the spine, next to private offices and the office area, she gave a square meeting room a rotunda feel with the help of a circular ceiling cutout, curved bookcases with a built-in banquette, and a round center table, ringed by Eero Saarinen swivel chairs.

Well known names aside, she also had the confidence to incorporate offhand touches. She gave the thumbs-up, for example, when her 25-year-old artist daughter, Evan Rottet, wrapped a corner in the coffee bar with red string. And the conference room and pantry currently sport a temporary wall covering in red plaid, reflective of the company’s plaid push for fall.

Which doesn’t mean the wall covering could never retail. How about as part of a new signature collection from a talented designer named... Lauren Rottet? “I’m going to talk to them about that,” she says, then pauses. “Oh, my gosh. I hope so!”