Living a Fantasy: A House for Essex by Grayson Perry and Charles Holland 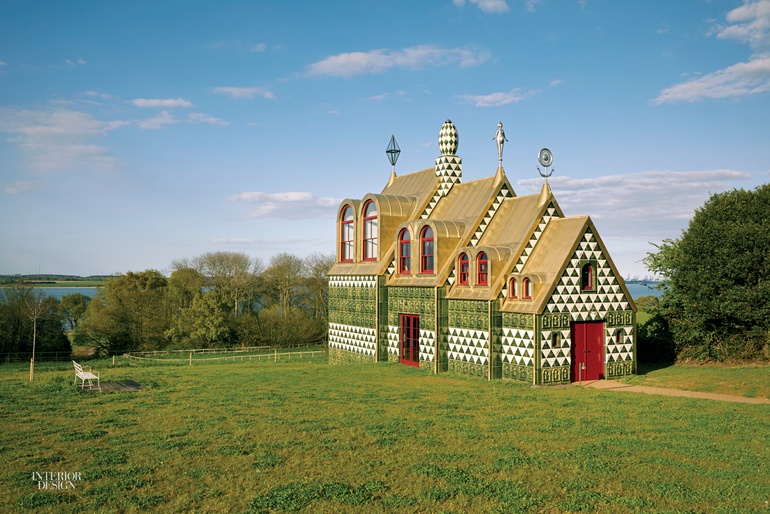 Standing under one of his luridly mesmerizing tapestries, artist Grayson Perry is describing his magnum opus completed in collaboration with Charles Holland, a director of the firm FAT, formally Fashion Architecture Taste, before it disbanded. “It’s great that I had Charles on board,” Perry says. “His influence stopped everything getting too kitsch. Originally it was much more Hobbit-y.”

The project, A House for Essex, is remarkable in almost every imaginable way. On the most literal, functional level, the 2,000-square-foot structure is the latest of six vacation properties commissioned by Living Architecture, writer-philosopher Alain de Botton’s nonprofit effort to get people to experience contemporary design by inhabiting it, at least briefly. (His books include The Architecture of Happiness and How Proust Can Change Your Life.) On the boards are a house by Peter Zumthor and another by Interior Design Hall of Fame member John Pawson.

A House for Essex is furthermore unusual for pairing an architect with an artist. Perry, a widely popular figure, is a transvestite potter and a Turner Prize winner. Attired as his alter ego, Claire—with her Little Bo Peep dresses, pigtails, and rouged cheeks—he has proved himself an astute observer of contemporary culture as well as a commercial success. His output blends outsider aesthetics, craft, and a sympathetic, unpatronizing view of ordinary life, all of which has made him one of the few widely accessible contemporary artists.

He conceived A House for Essex, in the village of Wrabness, not as an abode for Claire but as a tribute to another fictitious female: Julie May Cope is an Essex Everywoman, embodying a part of the U.K. that is often the butt of jokes—and just happens to be where Perry and Holland grew up. Julie marries twice, has two children, travels to India, and eventually becomes a social worker before meeting an untimely death, and the house is the temple that her second husband builds in her memory. It is, quite simply, breathtaking. If ever there was a design that existed as a riposte to minimalism, this is it. “I think minimalism has itself become a kind of kitsch,” Perry continues. In reaction, he has hoovered up every possible influence, from British arts and crafts houses to Finnish stave churches, from Byzantine chapels to Saxon stone carvings. It is a riot.

Julie’s complex life story, meticulously and poignantly constructed, is told through not only those tapestries but also myriad decorative elements. “The house has a narrative, just as all religions have a narrative,” Holland says. “Some of my most powerful architectural experiences have been in churches and cathedrals.” Just as in a church, what that narrative does is to create a framework for the decoration.

The fairy-tale exterior—with a silvery sculpture of a pregnant woman atop a shimmering golden roof, like a Thai temple’s, and almost 2,000 faience tiles displaying such icons as hearts and cassette tapes—affords a taste of what’s to come. And the interior doesn’t disappoint. Its cocktail of sophisticated postmodern jokes and quotes mixes London’s Sir John Soane’s Museum and Vienna’s Adolf Loos, filtered through pop-art plastic shades.

A bit Robert Venturi–esque, to boot, one wall of the double-height living room stands apart as an “internal facade,” with rounded juliet balconies protruding from the two bedrooms above. The niche between the balconies, above the fireplace, contains a fat deity: another pregnant figure, this one in ceramic with a hint of Niki de Saint Phalle and neolithic ornament. Everything is defined by gaudy colors, from the deep red of the feature wall, the window frames, and the bases of the banquettes to those banquettes’ canary-yellow upholstery and the green-and-cream chevron pattern on the floor. From the sidewalls, the tapestries seem to push in, one depicting Julie in her hippie-ish phase and the other showing stages of her adult life.

Hovering above the living room is a pale blue motor scooter that acts as a chandelier, shining its headlights around. In the Julie mythology, this is the scooter, belonging to an Indian restaurant’s delivery man, that runs over and kills her. And here it hangs, a lethal machine sentimentalized as a memento mori. It is a wonderful mess, given coherence by Perry’s quirky yet oddly believable story.

Most of the rest of the ground level is occupied by the eat-in kitchen with its gleeful mix of retro furniture and details, even old light switches. Wall tile here is green, a slightly darker shade than the mosaic tile that lines the upstairs bathroom, including the bath sunken for a kind of hammam effect. Sharing this bathroom, each of the stripped-down, almost rustic bedrooms is dedicated to one of Julie’s marriages, the first disappointing and the next happy. Bedroom windows frame views of the dramatically flat meadows and big skies of eastern Britain, the landscape that, immortalized in John Constable’s 19th-century oils, became the archetypal image of the English countryside.

Perry found an ideal collaborator in Holland. Now practicing as Ordinary Architecture, cofounded with a former FAT colleague, he is one of the most consistently sophisticated provocateurs, working in a postmodern vein long abandoned by almost everyone else. A House for Essex is a PoMo temple to narrative in which every carefully crafted detail adds to a richness that’s almost overwhelming but always amusing. “A lot of my favorite architects’ houses are about the dramatization of domestic life,” he says. That is exactly what he has created here with Perry—a poignant celebration of the wonder of a life well lived, if sadly cut short at its happiest moment.