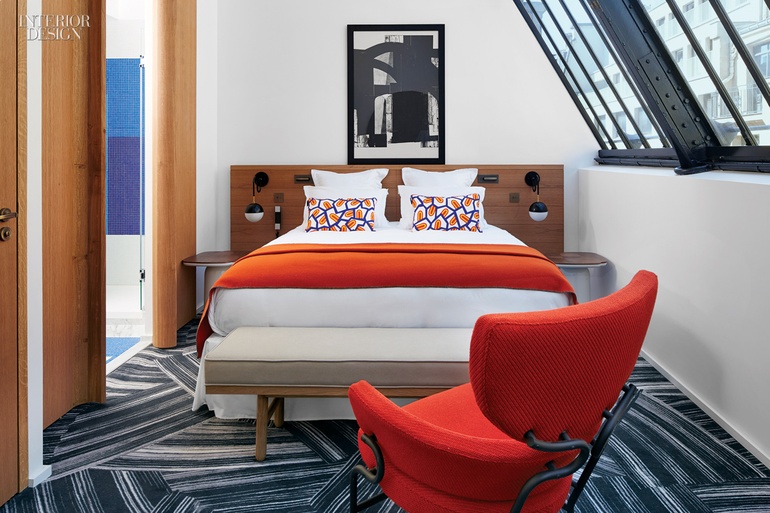 If a Paris gallery came complete with big comfy beds and luxurious bathrooms in addition to contemporary artworks and design objects, it might look a lot like the Hôtel du Ministère by Agence François Champsaur. There are sculptures down in the reception area and courtyard, and guest rooms at the very top have romantic artist-studio skylights. You might be tempted to stage an impromptu Bed-In.

Contemporary art and design are both new kids on the hotel’s block. The Ministère in the name is a reference to the French interior ministry, ensconced since 1861 in a palatial mansion nearby, and the area, largely old-fashioned and residential, was once a discreet fiefdom of aristocratic families. The Marquis de Lafayette, celebrated for his role in the American Revolution, spent the last years of his life on an adjacent street.

Renovating the hotel’s original building several years ago, Champsaur brought in gaiety and pizzazz. The revamp mixed his signature custom furnishings, often in rounded forms and natural materials, with a deft sprinkling of Carlo Mollino’s lounge chairs and Frank Gehry’s Cloud pendant fixtures. Carpet was boldly patterned, and a zingy color palette included blueberry and lemon zest. Then the hotel annexed the property next door. Possibilities doubled, and so did the challenges.

The neighboring building stands slightly lower, at four stories instead of five. It’s furthermore composed of distinct street-front and rear structures connected only by a narrow volume alongside the small central courtyard. While the front was intended for apartments, the back was initially a lace factory. Both, however, had been converted into office space. They furthermore shared a significant design element, Eiffel Tower–style framing for the skylight in front and the entire glass facade in back.

“Respecting the building’s history, definitely not transforming everything under a pretext of modernity, was the basic principle of the project,” Champsaur says. “We had to recover the original industrial architecture.” He resolutely retained the blackened-steel framing where it still existed. Where it had been modified or removed, he restored or replaced. (He did swap out the glass for double-glazing.) Maintaining the high ceilings was another priority, because they allowed the creation of the five duplex suites and two split-level rooms that now share the annex with 11 standard guest rooms. In one split-level showpiece, the sunken bathroom’s tall window offers a view of the bedroom, its skylight, and the blue or clouds beyond—unless the flick of a switch shifts the “smart” glass from clear to opaque.

The Eiffel motif returns with the blackened-steel handrails for staircases in the duplexes and with the black-painted oak latticework applied to several otherwise white armoires, doors, and walls. Serge Mouille floor and task lamps in black-painted steel and aluminum complement the industrial style. In a similarly 1950’s mode, Jean Royère’s playful designs inspired new sconces in black powder-coated steel. Carpet in a giant black-and-white brushstroke pattern completes the backdrop for bursts of vibrant color.

Walls in the breakfast room are pure Piet Mondrian, and upstairs there’s plenty of Pop in the banana yellow or lipstick red upholstering Franco Albini’s armchairs—the same colors used for the enormous circles in the middle of white curtains on the duplexes’ double-height windows. On the beds, persimmon throws meet pillows in brilliant prints by Memphis co-founder Nathalie Du Pasquier. The exuberance reflects Champsaur’s Mediterranean heritage, which he credits as a major influence: “It’s the color, the light, the art de vivre, the art of receiving guests and the art of making luxurious things with simple materials.” Here they include wood, mostly oak and beech.

As for actual art, the myriad works for both renovations include original watercolors, gouaches, drawings, and prints. Guests visiting from the U.S. might be interested to learn that the colored lithographs in several guest rooms and suites are by a fellow American. It’s film and TV director David Lynch, who recently transformed a pivotal scene in his Mulholland Drive into reality with a Paris private club called Silencio.