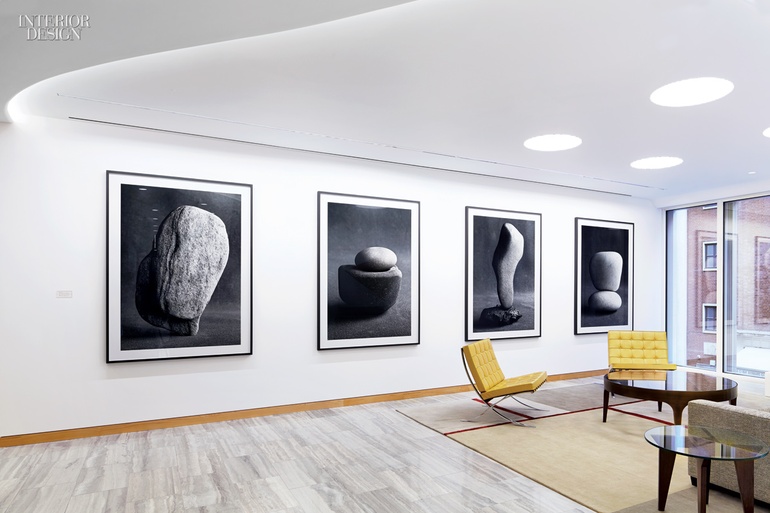 Long celebrated for its haberdashers, London’s Savile Row has become a stronghold for hedge funds. One of the latest arrivals is Angelo, Gordon & Co., a U.S.-based investment firm that manages billions of dollars—that’s a lot of custom-made shirts and ties. So Stephen Yablon Architecture and the interiors firm DL Design Associates were keen to embrace that sartorial tradition for the company’s largest office in Europe. “The streetscape is a big part of the project,” Stephen Yablon explains. “When you’re inside, the framed views make you feel like you’re still on the street.”

Yablon maximized the resulting natural light with reflective gray travertine and blond maple throughout. However, the 6,000-square-foot rectangle isn’t monolithic. It breaks down into distinct zones. A reception area cuts across the center. Largest is the 16-seat trading floor. Various meeting venues appear at both ends. At the end overlooking Savile Row, the boardroom, meeting area, and lounge can combine to operate as a single space for presentations or social events. “There are lots of folding and pocket doors to make that work,” he says.

The bold palette carries through to much of the art, chosen to mitigate the gray London winters. “From the very beginning, we kept in touch with the art consultant about colors and finishes,” Yablon says. Art is integral to the location, too. The giant angular bronze forms of a sculpture commissioned from Joel Shapiro hover above the entrance to the building, a ground-up structure by Eric Parry Architects. And the street-level tenant is Hauser & Wirth, a gallery by Interior Design Hall of Fame member Annabelle Selldorf.