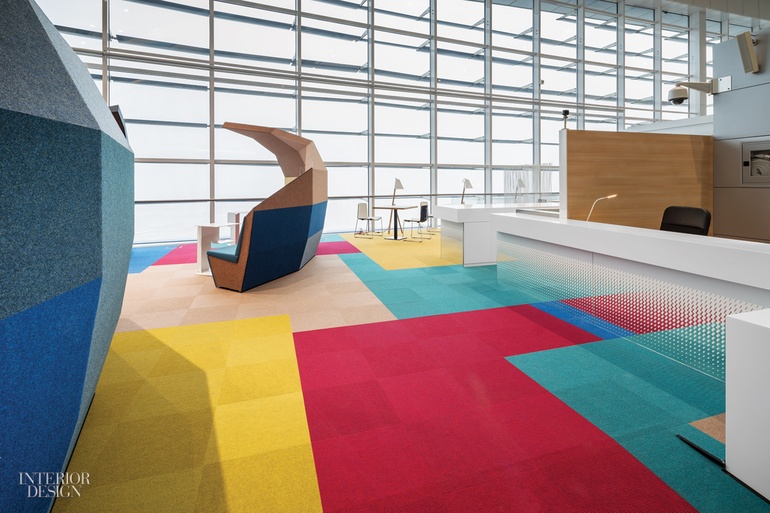 It’s a worry that probably nags at designers worldwide. NUCA Studio partner Ionel Pascu comes right out and expresses it: “Users consume space without processing all the special things we’ve carefully prepared for them.” This may hold particularly true for airport lounges, where travelers are solely focused on getting there, wherever that may be.

But they’re sure to take notice of the playful, colorful lounge that Pascu and his partner, Robert Marin, designed at Bucharest Henri Coanda International Airport. The initial client was food-service provider Alpha Rocas. Subsequently, Romania’s national airline, TAROM, leased the lounge as a place for elite travelers to eat, relax, catch up on work, and, unlike most North American counterparts, smoke while awaiting departure.

With the smoking room almost the sole fully closed place in the 2,600-square-foot plan, the project presented particular challenges, chief among them space-making and controlling acoustics. Nuca addressed both. Delineating the main lounge is a trio of what Pascu and Marin refer to as igloos. “Like Eskimo houses, they are protective and provide privacy,” Marin explains. Since this is Bucharest, instead of Anchorage, the igloos were built not from snow but from MDF. They’re clad in carpet, inside and out, and contain banquettes with a scattering of tables sized perfectly for laptops. What makes the design overall stand out are the vibrant compositions of red, yellow, and blue. Those three colors appear not only on the banquettes and carpet tile in the main lounge but also on the wallpaper in the smoking room.

The explanation for the bright palette is straightforward: Red, yellow, and blue are the colors of the Romanian flag. And what about the name NUCA? Marin chose it “because it’s simple and graphic,” he says. Nuca is also Romanian for walnut. “Sometimes,” Pascu adds, “we go nuts with a project.”