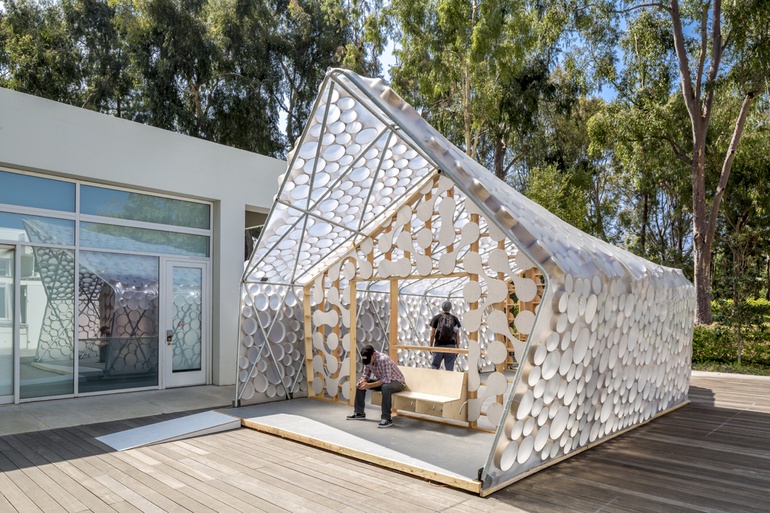 Is living small, living large? The recent snowballing of the micro house trend seems to point to a resounding yes. Done efficiently, a small house can be less expensive, less cluttered, and more sustainable. Now architects are adding a few more innovative perks to these small spaces—and even a lizard or two.

Here, Interior Design spotlights five recent small houses driven by seriously big ideas, from a prototype encouraging lizard habitats, to a house geared towards "churchmen and laymen" with a very familiar form, to a house based on research from a popular Swedish web site, and more.

1. Firm: UCLA's CityLAB in collaboration with Kevin Daly Architects
Project: cBackyard Homes study, the Backyard BI(h)OME
Location: Broad Art Center, Los Angeles
Standout: Recyclable? Check. Lightweight? Check. A natural habitat for rock lizards? Also check. That's the Backyard BI(h)OME, a prototype designed by UCLA's science education program CityLab, in collaboration with Kevin Daly Architects, to meet a demand for easy-to-install, low-cost, and sustainable housing units in Los Angles. Weighing in at about 8 pounds per square foot, the 350-square-foot pavilion is on view at UCLA through the summer. The finalized structure would rest on a rock foundation (home to the lizards) and have a compostable toilet, a grey water system, and a wall that can be configured into an edible garden. Lizards not your thing? Modular units can be attached to attract additional creatures including bats, bugs, and birds.

2. Firm: Dachi Papuashvili
Project: Skit Prototype
Standout: Standing as a four-story cross, the one-person Skit by Dachi Papuashvili is geared towards "churchmen and laymen" seeking religious isolation for activities such as fasting, translation, or icon painting, according to the architect. The wood-clad structure is erected in prefabricated pieces and functions independently thanks to solar panels and a grey water system. The ground floor serves as storage, while the second has a bio toilet and shower. The 130-square-foot open living space on the third floor includes a bedroom, a cabinet, a kitchen with dining area, and a study. The 43-square-foot fourth floor, located at the top of the cross, acts as a prayer room.

3. Firm: BLDG Workshop and 608 Design
Project: The Bunkie
Location: Ships anywhere
Standout: All four models of the prefabricated, flatpack Bunkie are just over 100 square feet—meaning a building permit is not always required. Thanks to factory pre-assembly, the structure can be erected by an installation team in less than three days, at a starting cost of $17,000 (a DIY stripped down version is available for just $6,400). Bunkie's sleek facade consists of Canadian fir and spruce structural plywood. Inside, surfaces are maple-faced, formaldehyde-free Purebond plywood and veneer-core decorative panelling. Furnishing options include a space-saving queen-sized wall bed, chairs and table that folds into walls, shelving, and an ethanol fireplace. Need more space? Two Bunkies can be joined together.

4. Firm: Tham & Videgård Arkitekter
Project: The House of Clicks
Standout: Swedish firm Tham & Videgård decided research would drive the House of Clicks, a concept touted as Sweden's most desirable home. The design of the 1,100-square-foot three-bedroom house—down to its cheerful red facade in the style of traditional Swedish cottages—comes from clicks between January and October 2014 on the country's popular property site, Hemnet, which receives over 2 million clicks a month. By analyzing price, area, room, and floor data in collaboration with Hemnet, the architects built a house, unveiled in May, with countrywide appeal and a price-point starting at around $320,000.

5. Firm: Hammerschmid, Pachl, Seebacher - Architekten
Project: Teichhaus
Location: Austria
Standout: In order to cause the least disturbance to a 25-year-old artificial lake reclaimed by nature that serves as a swimming hole, the architects raised the 540-square-foot Teichhaus above the water on stilts—four steel pillars. Adding to the harmony, spruce boards cladding the facade are stained a dark brown shade similar to the water below. Inside, natural wood also reigns: flooring, ceiling, wall and furniture surfaces are oiled birch plywood.