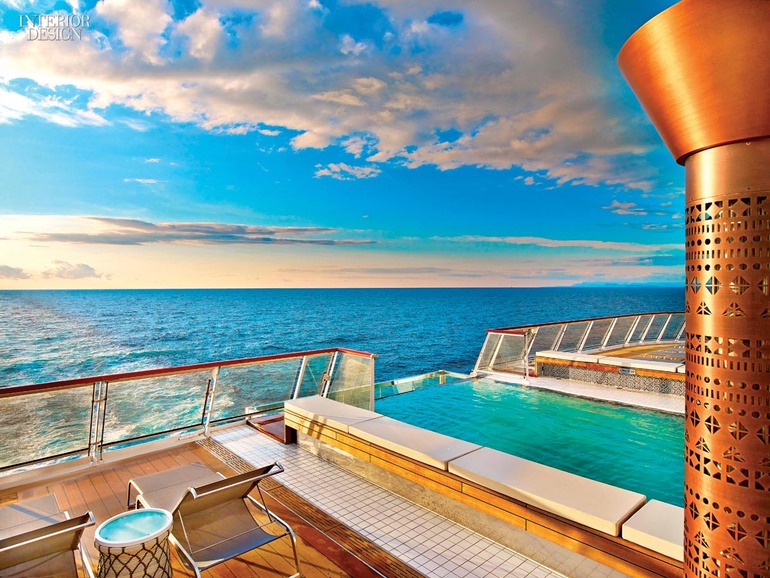 Ocean liners, as the saying goes, are floating hotels. Interior Design Hall of Fame member Lauren Rottet knows all about hotels on solid ground. Ships, however, were quite another story, given their steel-only construction, weight limits, balance requirements, strict fire regulations, and high ratio of public to private spaces, just for starters. Designing the Viking Star also meant creating a brand, as the ship represents Viking Cruises’s big move from rivers to oceans—with dips in the Atlantic between extended itineraries in the Baltic and Mediterranean Seas.

It was river cruise ships, however, that gave Rottet Studio principal Richard Riveire his introduction to Viking. “The call from chairman Torstein Hagen came out of the blue,” Riveire recalls. “He realized his ships lacked character. What he hadn’t realized, up to that point, was how an architect could help.”

After some research, Hagen concluded he needed someone skilled in hotel design. So he asked Rottet Studio and two other firms to put together a proposal for a stateroom. Though Riveire had never even been on a cruise, he won the job with the support of nautical expert SMC Design. He went on to complete an impressive 44 river vessels.

Then the Viking Star appeared on the horizon. Considered midsize for an ocean liner, it’s nevertheless considerably larger than its older sisters. “River ships carry around 200 passengers,” Riveire says. Capacity for the Viking Star is 930, translating into 465 staterooms that range from 280 square feet to nearly 1,500. Hence the necessity for an array of amenities for all those people. Spread over five of the nine decks, 105,000 square  feet of public space encompasses five dining options, a poolside bar, a three-level main salon, a two-level lounge, a 425-seat theater, shops, and a spa.

Passengers boarding the Viking Star step right into the soaring main salon. “We based the design on an old Viking ship—with wood finishes, ribs on the ceiling, and window screens in macrame, like rigging,” he explains. Needing no explanation, photographs of Nordic scenery loop on a video wall at the top of the salon’s central staircase. Below it, he tucked a garden of dried lichen, moss, bark, and pebbles.

Another “living room,” as he terms it, is the Explorers’ Lounge high above the prow of the ship. Entry is via a walnut-veneered tunnel twinkling with inset light fixtures configured as constellations, and the astronomy references continue on the lounge’s top level, styled as a study chock-full of maps, models, and other nautical objects. Near the lounge, midship, is the charming Wintergarden tearoom, its bentwood columns and canopy conceived as the stylized trees of a forest from Norse mythology. Contributing to the narrative, two raven figures perched on a soffit are said to be Huginn and Muninn, the god Odin’s eyes on the world.

The tearoom overlooks the main pool. It’s quite an extravaganza, rendered a 24/7 indoor-outdoor rain-or-shine attraction by a retractable dome. If the small bar, grill, and movie screen here aren’t sufficient diversion for swimmers, they can head all the way to the stern: Its outdoor bar, with the Viking-appropriate name Aquavit, wraps three sides of an infinity pool that appears to spill right into the sea behind the ship.

Cruises are celebrated for their food, and the Viking Star holds its own. Next to Aquavit, the World Café serves a buffet. Manfredi’s Italian Restaurant offers the option of private dining. For a white-tablecloth ambience, there’s a restaurant called simply. . .the Restaurant.

For burning off those calories, the ship boasts a battery of outdoor fitness equipment. As a reward for sweating it out, there’s the spa. Passengers can chill out in the ice grotto and warm up in the sauna or opt for nothing more strenuous than a dip in the plunge pool, followed by reclining on a chaise longue near the fireplace.

Viking Star staterooms are mini doppelgangers for guest quarters at Rottet’s boutique hotels on dry land. Witness the pure luxury of the owner’s own suite: teak paneling and flooring, lacquered cabinetry, nail-studded leather upholstery on clean-lined seating. Besides ample spaces for sleeping, sitting, and dining, the suite has its own conference room, kitchen, sauna, and veranda. All aboard.