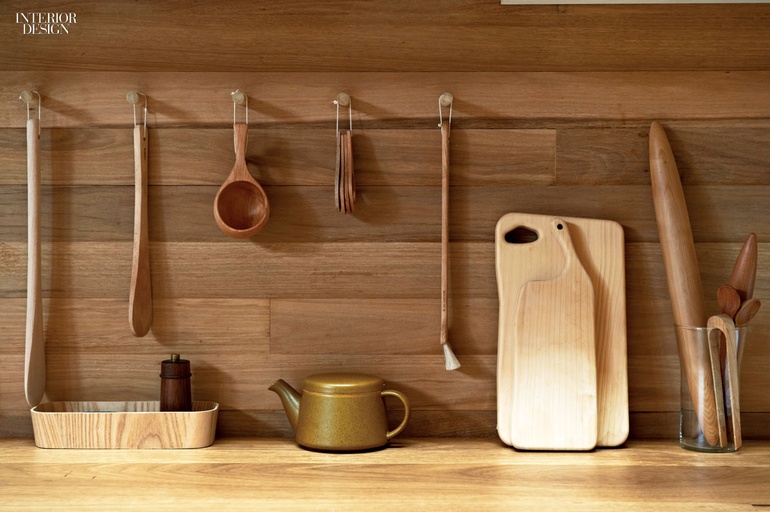 There’s a pleasing balance between unpretentious simplicity and cosmopolitan sophistication in the Australian holiday retreat that Stephen O’Connor and Annick Houle of O’Connor and Houle Architecture designed for their own family. Likewise embodying balance is the location: The village of Blairgowrie is on a peninsula with Melbourne’s placid bay on one side and the wild and stormy Bass Strait on the other.

Fitting right in with the village’s summer beach-shack character, native hardwoods appear throughout the property’s pair of single-story structures: a main house and a separate studio containing a home office. White mahogany wraps the exteriors, while honey-colored tallowwood clads the interiors and is furthermore used for the various decks in the courtyard between the buildings.

Detailed woodwork evokes more polished vernaculars, too. “A lot of country houses in colder, northern climates embrace an all-timber aesthetic,” Houle says. She’s referring not only to her native Quebec but also to Scandinavia and Japan, where she and her husband have traveled extensively.

“There’s no Sheetrock on the entire property. Everything was built by one master carpenter,” she continues. “That made it rather costly. But we saw the project as an opportunity to cater to our often unreasonable obsession with craftsmanship.”

The kitchen broadens the materials palette by com­bining the tallowwood with touches of white. Tiles topping the island are plain white ceramic squares. “A riff on the popularity of terra-cotta counters in 1960’s Australia,” Houle says. And paint brings a glossy white to drawer fronts and cabinet doors.

In the master bathroom, the Japanese-influenced soaking tub is white, but its surround and virtually every other surface is tallowwood. Even the floor is wood, with the strips slightly spaced for drainage. Meanwhile, the floor and walls in the bathroom shared by O’Connor and Houle’s children are tiled in the same white squares found in the kitchen. Against the white, the shower curtain’s red flowers—the 1964 pattern by Maija Isola—blaze out all the brighter.

To that Finnish classic, add furniture in the living area and playroom by Alvar Aalto. Hans Wegner designed the dining chairs, and the office is warmed in wintertime by a Danish stove. All northern imports that look right at home in their antipodean setting.