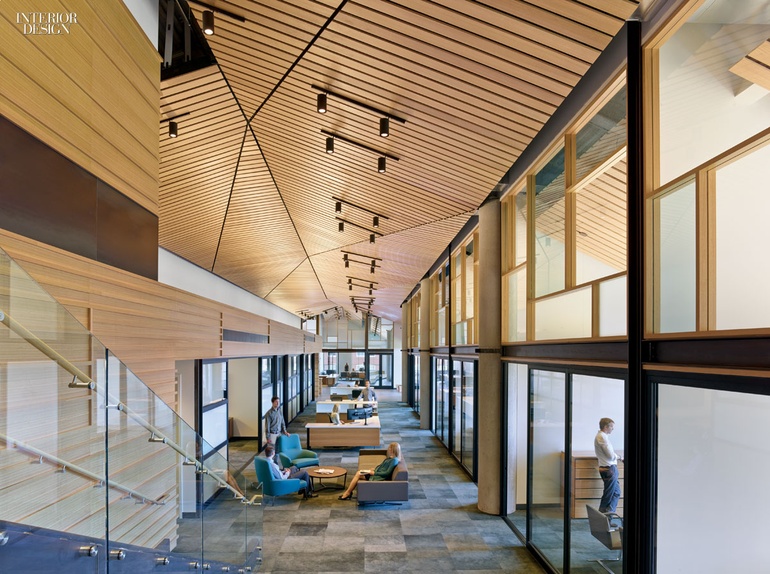 One of the largest investment firms on the West Coast, San Francisco’s ValueAct Capital has $18 billion under management. But the mind-set there has the experimental bent more commonly found at much smaller companies. So the COO, planning a move across town, charged the architects at Gould Evans with designing an environment that eschews the formality associated with the words corporate banker. “This group operates in a more collaborative, nimble way than any other investment client we’ve worked with,” principal Bob Baum starts. And his firm has completed five such projects in the past 15 years.

ValueAct’s 30,000 square feet had plenty of potential, offering mullioned windows overlooking the Presidio as well as the volumetric bonanza of a ceiling rising to 23 feet. The floor plan is roughly an H, with the legal and compliance staff occupying the connector, flanked by the investor group and administration. Private offices line the perimeter, while open work zones are farther in. Nothing necessarily new there. What’s new is the execution.

With transparency the buzzword in financial services since the recession, the glass fronts of the offices and the conference rooms soar to meet the ceiling. The lower half of this elaborate composition is framed in blackened steel. Above, the frame switches to eucalyptus configured to outline Piet Mondrian–esque shapes, some clear and some laminated pale blue or white.

The long expanses outside are punctuated by break-out areas, effortlessly chic with furniture by Rodolfo Dordoni and Studio Massaud. For real chillaxing, employees head up to the mezzanine, where a lounge offers a game table for rounds of poker. “They work long hours. It’s like a tech start-up,” Baum says. When they’re hungry, there’s a pantry outfitted with walnut-veneered cabinetry—practically homey.

Eucalyptus, however, is the signature wood, a nod to trees in the Presidio. Baum used eucalyptus slats to create the peaked ceiling running above one section of the H. “They modulate the height yet maintain the grandeur,” he notes. Making this truly a cathedral of commerce.