Nature, Nurture: A House by UNStudio Embraces the Dutch Landscape 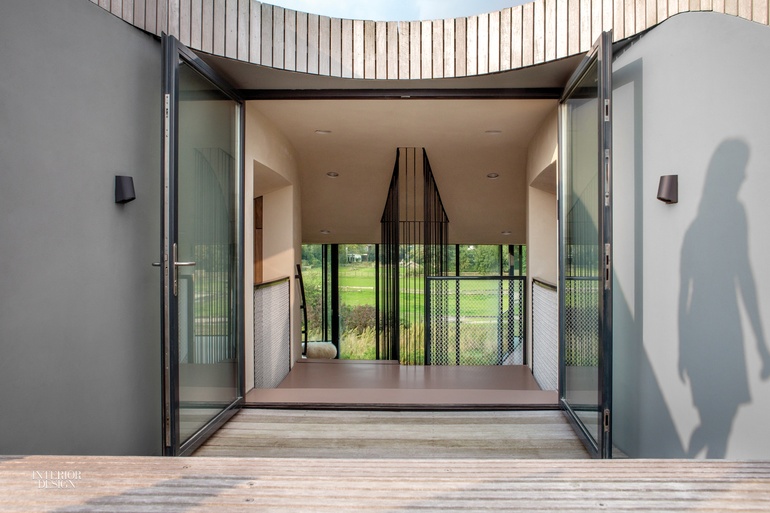 “Hedonistic Zen.” That was the paradoxical request for the design of a family house in a town in the northern Netherlands. For UNStudio principal Ben van Berkel—internationally known for such large, urban projects as the Mercedes-Benz Museum in Stuttgart, Germany, and a curvy apartment tower in Singapore—the opportunity to build on an intimate rural scale was a breath of fresh air, and he was intrigued by the architectural riddle.

Puzzling it out, Van Berkel first considered the unspoiled natural surroundings, certainly possessed of abundant Zen potential. And hedonism? He and his clients agreed on a wide definition: “To get the most richness out of life.” Music, art, and health would all play a role. So would unseen “smart” technology controlling the HVAC and solar systems and the appliances.

For the footprint of the 4,400-square-foot house, he devised a butterfly form with back-to-back C shapes for the wings and a central stair hall for the body. Walls arc, and corners are rounded, instead of the usual straight lines and 90-degree angles—the antithesis of Zen spirit, according to Van Berkel. All those gentle curves add up to a more relaxing experience. “As you pass through the house, the contours become one flow of movement, which repeats and even loops, somewhat like a musical composition,” he says.

Different parts of the house correspond to a particular feature of the landscape: the town, the sea, the woods, and the polder, that distinctly Dutch type of expanse of pastures on reclaimed wetlands. Bedrooms, for example, are oriented toward the woods, increasing the sense of privacy. The open kitchen-dining-living area faces a picturesque polder environment with windmills in the distance.

To enhance the view, Van Berkel raised the public space on a platform, a technique inspired by the old master painters of the 16th and 17th centuries. “You always see the landscape from a bit above, because they were standing on a higher point,” he explains. But nature is not merely a lovely specimen to be ogled from a distance. He pulled the landscape virtually inside, as the C shapes embrace inlets of grass, plants, and mini-ponds. For the living-dining-kitchen facade, the window wall echoes the bend of a dry stream, and, hugging the glass on the interior, a low bamboo platform follows the same arc.

A rather autumnal palette—pale green, taupe, brown—“picks up the tones of the landscape,” he says, and organic materials “flirt a bit with it.” Most noticeable is an unvarnished West African hardwood, limba. Mainly used to clad the exterior, the slim vertical planks also panel the entry and stair hall. Clay has been smoothed over other walls as well as ceilings and floors, providing thermal and acoustical insulation. Bathroom surfaces incorporate small white rounded stones.

The natural materials contribute to the subtle sensuousness of the house. Hedonism takes an overt  form in the master suite’s hammam, modeled on a traditional North African steam bath, with the ceiling, floor, walls, and built-in bench all surfaced with Moroccan-style tadelakt. That’s a lime plaster commonly mixed with sand and coated with olive-oil soap—impermeable to vapor and lusciously smooth to the hand. The tadelakt’s tactile quality “creates an interactiveness between the body and the home,” Van Berkel says.

Moving from touch to sound, music erupts from a room outfitted with a drum set, electric guitars, and amplifiers. Just outside the room and at various intervals around the house, built-in shelving showcases a collection of exotic musical instruments and folk art, displays that infuse the atmosphere with thoughts of beauty, leisure, and pleasure. And even more indulgence is on the way. Under construction is an ecological “swimming pond,” a pool purified naturally by plants. Once complete, it will serve as an aesthetic addition to the garden as well as a harbor of bodily pampering. The ultimate expression of hedonistic Zen.