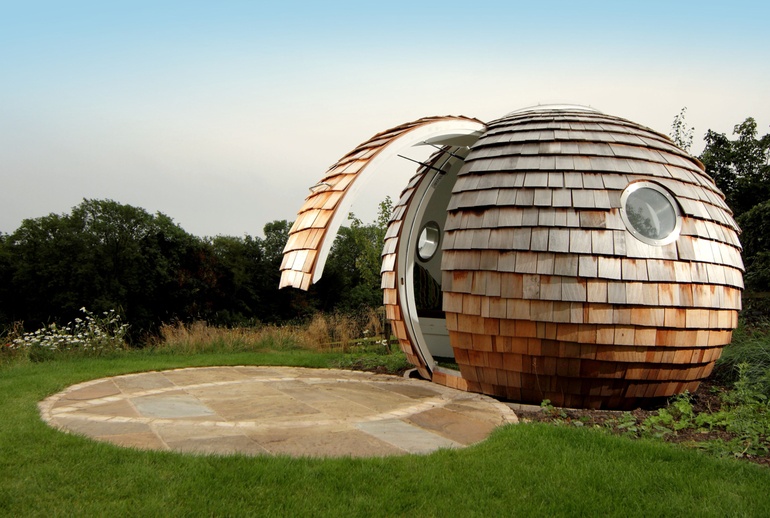 Is it just us, or have architects laid a lot of eggs lately? With its challenging elliptical curves, the egg has long been a case of artistic study. However, the egg's tremendous appeal also goes deeper, to its soothing, womblike quality; a tribute to that tiny chick nestled in its egg, protected from and as of yet unaware of the world around it. From a tiny home to a hi-tech office building and a Jetsons-inspired transportation pod system, here are six eye-popping examples of egg-shaped architecture.

A built-in kitchenette, running water, toilet, and hot shower? These luxuries are not usually found in a tiny, off-grid home. Designed as a micro energy-efficient house for two adults, the 86-square-foot Ecocapsule is powered entirely by wind and solar energy, thanks to a built-in 750-watt wind turbine and solar solar cells. Kitted out with a rainwater collection and filtration system, Ecocapsule can also be water independent. The company is currently taking orders, and the 3,300-pound structure can be shipped in a standard shipping container—or, the architects note, airlifted, towed, or pulled by pack animal—as early as 2016.

As a backyard office, Archipod, with its signature Western Red Cedar shingles and double-glazed stainless steel porthole skylight, has been on the market a few years. However, designer Chris Sneesby has been busy and now has a few noteworthy things in the pipeline. Namely, the spherical pod will soon be treehouse-ready.

Sneesby clarifies, "We are building a 7.2 feet in diameter spherical pod which can be suspended from a tree or placed on stilts—the access is through a hole in the floor, and the cladding is going to be very unusual. The prototype is going to be built as a library/reading room with curved book shelves and upholstered floor."

It may look like an egg-shaped spaceship, but Ablang is conceived to perch on beaches, offering protection from the blazing hot sun. Designed as an "outdoor living space" by Seokmin Yoon, principal of Yoon Space Design, and Park Jungsu, principal of Song Pyoung, the 74-square-foot structure is fabricated from lightweight and low-cost polystyrene. A splash of color comes in the form of the door, available in hues including sky blue, lemon-yellow, and tomato-red.

The end of traffic jams, thanks to levitation technology and NASA: That's the Skytran Elevated Personal Rapid Transportation (PRT) System developed by SkyTran, a NASA Space Act company. Commuters whiz to work Jetsons-style nestled in the embrace of a sleek, light-weight, egg-like pod. Each pod fits two people, and employs state-of-the-art, virtually silent, and sustainable SkyTran Magnetic Levitation (STML) technology. Sound too high-tech to be real? A pilot project of the SkyTran system is currently under construction in Israel, at the campus of Israel Aerospace Industries, with completion planned for late 2015. Next up is France and India.

Planet Earth, and its qualities as a self-sustaining ecosystem inspired the design of this high-tech, futuristic office building. Currently in the design stage, the Cybertecture Egg is slated for the business district of Mumbai, India. The 340,000-square-foot building will rise 13 floors, with an additional three levels below ground. Sustainable design elements will include solar photovoltaic panels, rooftop wind turbines, an elevated garden, and a grey water filtration system—while the tilt of the egg structure will increase solar energy gain.

Bloggers and digital communities around the world helped 3D-print Project Egg, a honeycomb-like, egg-shaped pavilion. Presented at Salone del Mobile in Milan this past April, Project Egg by Michiel van der Kley is the largest 3D-printing community art project to date. Measuring 16 feet by 13 feet by 10 feet, the pavilion is fabricated from 4,670 uniquely shaped pieces of biodegradable thermoplastic or Polylactic acid (PLA), created from renewable resources.