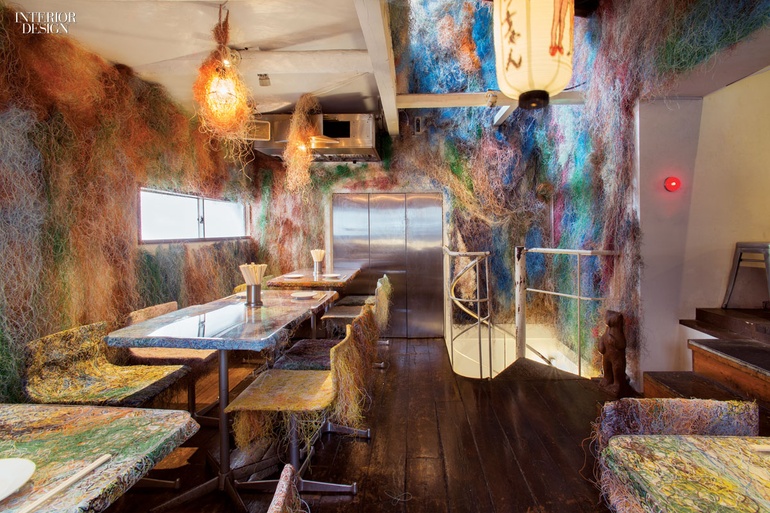 When you head one of Japan’s most illustrious architecture firms, respon­sible for award-winning museums and mixed-use towers, it’s unusual to be commissioned for a hole-in-the-wall yakitori joint, as in chicken skewers—designed by an unknown architect in an unknown year. But that was precisely the scenario for Kengo Kuma & Associates, asked to reimagine Tetchan. Kengo Kuma accepted only because the owner was a longtime fan.

The restaurant sits in a maze of Tokyo alleys where, in the postwar years, black-market vendors hawked their wares and, these days, salarymen gather for afterwork beers. Inside the two-level, 325-square-foot space, the rooms were cramped, the ceilings low, and the columns irregularly placed. Those limitations, however, became Kuma’s inspiration, he says: “I used the negative conditions to evoke the black-market character.”

Leaving the timeworn concrete floor and the spiral staircase untouched, he introduced two unconventional materials: discarded Ethernet cables and acrylic from melted-down speedometer covers, all scrounged from a waste-disposal company on the outskirts of the city. That acrylic went to  the ground level, where the globular forms like jellyfish, encased in translucent slabs, compose a glowing central counter as well as the tops of tables and the seats of stools. They make a cool counterpoint to a punky manga illustrator’s red-hot mural, which the owner commissioned even before hiring Kuma.

Calm unravels into chaos upstairs, as tangles of rainbow-colored plastic-covered cables hang like psychedelic Spanish moss from walls, tables, chairs, and pendant fixtures. The cables were stapled to surfaces at random and ironed flat where necessary. “My intention was to demonstrate that beautiful things can be created from recycled materials,” Kuma explains.

That said, he also reports drawing inspiration from charcoal-grilled chicken: “I love yakitori. It’s an informal, humble food that expresses the essence of Japanese culture, and I conveyed that in this design.” Not that he’s crowing.