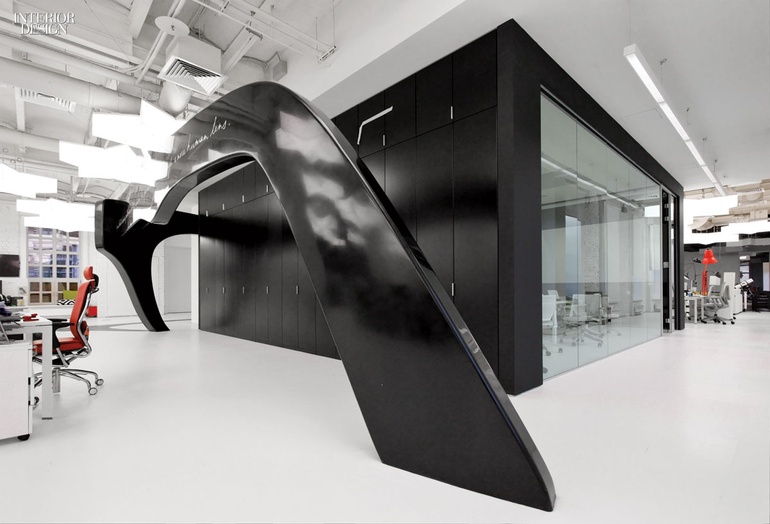 A gargantuan rendition of advertising guru Leo Burnett’s signature black-framed eyeglasses looms behind the blindingly white reception desk at the agency’s office in Moscow. While the city’s overall mood is heavy these days, this interior by Nefa Architects is all about playfulness. “When people are creative, work can be a bit chaotic. We’ve created a chaos that’s nevertheless organized,” designer Maria Yasko says.

That’s speaking from experience. Nefa also designed Leo Burnett’s former office, in a repurposed textile plant across town. The setting this time is similarly industrial. However, the agency’s 20,000 square feet is just a small part of a much larger job.

She and principal Dmitry Ovcharov have helped the Publicis Groupe to move its 10 Russian subsidiaries, among them Leo Burnett and Saatchi & Saatchi, into 95,000 square feet in two buildings at a redbrick factory complex. Built in the 19th century by a French entrepreneur, the plant was seized post-1917 and renamed Bolshevik Confectionery. It’s now in the final stages of a transformation by O1 Properties into the Bolshevik Cultural & Business Complex.

“We tried to save the loft feeling,” Ovcharov says. He and Yasko certainly took advantage of the impeccable industrial credentials. The huge arched windows, brick walls, high ceilings, and exposed ductwork at Leo Burnett now complement a black-and-white overall scheme, which lends  an extra jolt to the red of corkscrew-shape lounge seating and oversize task lamps.

To unify the separate agencies, while maximizing a limited budget, Nefa conceived them as a series of edgy art galleries. “We gave each office a gimmick as a kind of compositional center,” Yasko says. “Leo Burnett’s is the glasses.”

Scribbled, seemingly, on their sides are Burnett’s creative mantras. “You can look at a business problem as a set of numbers. Or, you can look at it through a more hu-man lens,” for example. And “Creativity has the power to transform human behavior.”