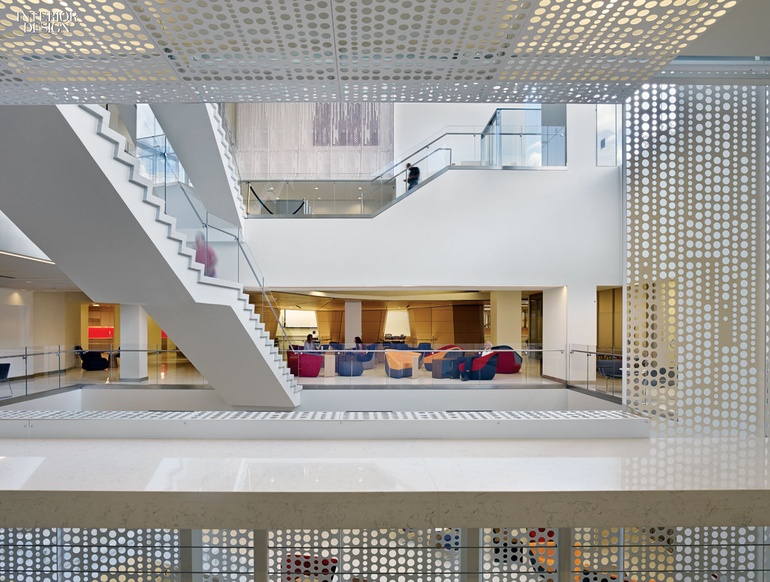 Harry Potter may have tapped into some powerful magic when he stumbled upon the Room of Requirement. Concealed near the top of the Hogwarts School of Witchcraft and Wizardry, this secret space reveals itself only to those in need. But that’s nothing compared to what the wizards at Studios Architecture discovered for Georgetown University. While scouting sites suitable for consolidating its School of Continuing Studies, Studios CEO Todd DeGarmo and principal Brian Pilot found a long-vacant television studio 3 miles east of the main campus, in Washington’s Chinatown. Studios took the tomblike building and, in 10 months, transformed it into 100,000 square feet of functional space, including seemingly unusable vaults under the sidewalk.

“We used every possible inch—and then some,” Pilot says. “The key was to make everything as simple as possible. We worked with the idiosyncrasies of the building to activate the interior.”

“Idiosyncrasies” is an understatement. The landlord, Brookfield Office Properties, had puzzled for years over what to do with a production facility so prehistoric. (As in 1980’s.) “There were these large cubic volumes awkwardly buried on the lower levels. No windows, no sunlight,” Brookfield senior vice president Sabrina Kanner says. “We thought about just slabbing them over, because we figured nobody would ever want them.” Pilot, however, went 180 degrees in the other direction. In what has become one of his firm’s signature moves, he cracked the claustrophobic setup wide open by removing the floor slab between two studios. They were double-height to begin with, so combining them created a four-level atrium. Then he popped in an M.C. Escher–esque staircase that floats through the void at slightly skewed angles.

He pulled daylight deep into the atrium’s nether regions, he says, by “cutting a huge hole” in the front facade, then replacing the red granite with a stretch of glass curtain wall. “One of the benefits of facing north is that we don’t have to contend with harsh rays of direct sunlight. We could create this ultra-clean aperture that lets people know what’s going on here.” Visitors are lured into the main entry and funneled effortlessly down to the reception desk.

“In the evening,” he says, “you can really see right in.” That’s particularly important for a school of continuing education, where the nontraditional students—midcareer professionals and military veterans—attend class mostly after dark. To lighten things up, he composed a pale palette of terrazzo, engineered oak, and white-painted walls as well as adding bright colors and curved shapes in the form of what the students call “Doritos chairs.” Actually modular Seating Stones by UNStudio, they’re a movable feast, constantly repositioned around the commons areas on every level.

Preserving the aesthetic was made possible, in part, by containing clutter—he managed to carve out 1,500 square feet for closet space alone. Those buried vaults have been repurposed to serve academic and administrative functions. Up at the top, to either side of the atrium, he uncovered several boarded-up clerestory windows, which became the starting point for a small chapel and the faculty lounge. They’re screened from the atrium by steel panels powder-coated white and perforated with circles ranging in size from a nickel to a cookie. (Thought bubbles, perhaps?) The screens not only provide texture and privacy but also accentuate the atrium’s 53-foot height without screaming feature wall.

At the rear of the building, what is now the enrollment office used to be a loading dock with a lift for cars being shot for TV commercials. “Before deciding to just take it out, we went through a lot of studies to figure out what to do with it,” Georgetown project manager Jodi Ernst says. “We even talked at one point about making it a kind of conference room that went up and down.”

The enrollment office is typical in being predominantly workstations—most staff members would be moving from closed offices to open office areas. For the 4,000 students, the primary transition was from classrooms scattered around the main campus and the suburbs to what the university is billing as Georgetown Downtown. Yes, the classrooms are now windowless, but angled door frames and walls create visual interest. The longest run of classrooms, deep in the bowels of the building, is interrupted by a state-of-the-art digital media lab. Unlike the recording studios or sound stages of yore, it consists of little more than a small, dimly lit room with two long tables, a microphone, computers, and a console. Magic.