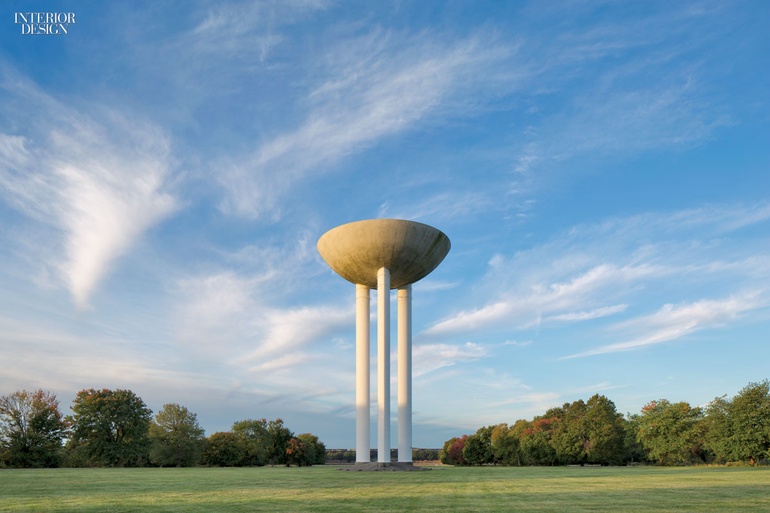 As an architecture student at the Cooper Union in the 1970’s, I was fortunate to have the painter Robert Slutzky as a professor. He had been a student of Josef Albers, who taught preliminary design at the Bauhaus. The Bauhaus declared that architecture, design, and art were one, to be integrated at the highest level, since the same elemental principles ordered all three disciplines. A version of the Albers course was taught by Slutzky, with one of the lessons organized around the idea of rectangular planes overlapping and interweaving to create “transparent” or dynamically layered space—a goal and signature of modernism.

I was recently able to apply my understanding of Albers and the Bauhaus to a truly amazing project, the adaptive reuse of the great Bell Laboratories in Holmdel, New Jersey. Built by Eero Saarinen and Associates in 1961, a time of ascendant American power—with additions through 1984 by the offshoot firm Kevin Roche John Dinkeloo and Associates—this 2 million-square-foot Bell Telephone research facility was the center of American innovation. The technology for the transistor, laser, and Telstar satellite was all invented here, as was radio astronomy, which brought us evidence of the big bang. After the Bell System was broken up, one of the spin-offs, Lucent Technologies, became the landlord of the building before merging with a French company and decamping to other facilities. Left empty, a modernist ruin, it was eventually purchased by a real-estate visionary, Somerset Development president Ralph Zucker, who campaigned to change the zoning to multiple-tenant. He then hired my firm, Alexander Gorlin Architects, to design what is now called Bell Works, an urban place in suburbia.

Announced from a distance by a flying saucer of a water tower, then introduced by an allée of trees reminiscent of the Château de Versailles, the building’s exterior is a perfectly reflective prism, a pioneering use of mirrored glass on this enormous scale. One enters like Alice, Through the Looking-Glass, into a magical world. Offices, shops, restaurants, and a hotel and conference center will occupy the four former blocks of labs, taking advantage of the inherent flexibility of their demountable panels. Meanwhile, film screenings, art exhibitions, and live music will fill the gigantic central atrium, 1,100 feet long capped by a full-length skylight. The extravagance of space was a temple to the mind of scientists who had the luxury to think and create, unfettered by immediate commercial interests.

This is truly one of the world’s great interiors, its 100-foot-width recalling the Baths of Caracalla in Rome and Saint Peter’s Basilica in Vatican City, the Crystal Palace of London, and that great pedestrian thoroughfare, Lincoln Road in Miami Beach. Not since working at I.M. Pei & Partners have I been involved in a project of this magnitude, where perspective begins to play tricks with the eye. From a distance, people seem like ants scurrying around. When someone is close by, the vastness retreats into the illusion of a flat stage set.

The problem was how to animate the expanse of new gray floor tile, a replacement for rough slate that had deteriorated. I was looking for a pattern to install in two sections between the pair of elevator towers, flanking the point where the lobby intersects the atrium. This pattern both had to look lively to those walking on it and had to be visible from walkways four levels up. Then I remembered how I.M. Pei would enlarge small sculptures to create public-scale works, among them Pablo Picasso’s Bust of Sylvette for a New York apartment complex and Joan Miró’s Personage and Birds for a Houston office tower. That train of thought led me to Albers, not only because of my schooling. The original carpet in the Bell Labs lobby— a sunken “living room” where scientists and executives would exchange ideas, sitting and smoking alongside built-in ashtrays—was revealed by Ezra Stoller photographs from the 1960’s to have a pattern of concentric yellow rectangles that recalled Albers’s Homage to the Square series exploring the harmonious balance between color and geometry. Though there is no evidence that Albers designed the carpet, he and Eero Saarinen were at Yale University circa 1950, so they probably were in touch, and Albers frequently worked with architects, including Walter Gropius’s Architects’ Collaborative on wall hangings for the Pan Am Building in New York.

At the scale of the atrium, however, Homage to the Square’s swaths of color would have become monotonous from up-close. I therefore looked at earlier, more complex Albers compositions and found two that would hold equal interest from near and far even when enlarged—dynamic, syncopated squares and rectangles. With permission from the Josef and Anni Albers Foundation, we mapped out the underlying grid, using a 2-foot-square tile as the module, and translated the rose and blue palettes into black, gray, and white. What at ground level appears like an asymmetrical modernist chessboard becomes, from above, a crisp wafer that floats on the field tile. Most remarkable, Albers’s design rhymes perfectly with Saarinen’s architecture, mirroring the solids and voids of the laboratories and the long walkways above. Albers and Saarinen are now in a dialogue, over space and time.