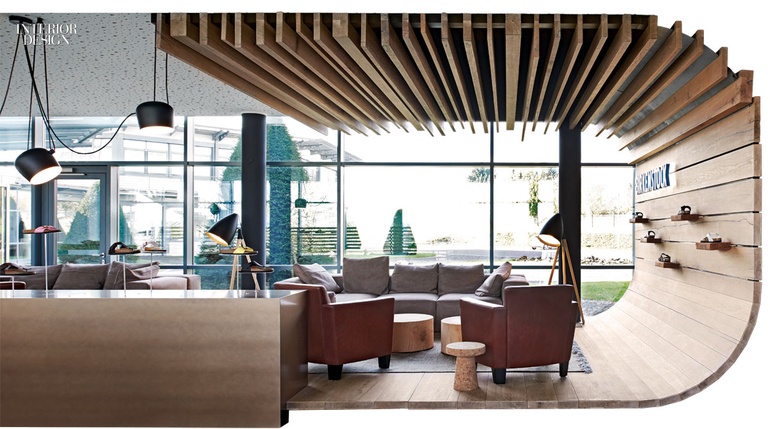 To understand someone, the old saying goes, you should walk a mile in his shoes. The corollary, if you’re designing the office of a shoe company, is that it would be helpful to be shod in its products. Luckily, Susanne Brandherm says, “Everybody in my studio has Birkenstocks.” That fact alone made the redesign of headquarters in Neustadt an der Wied, in the Rhineland, something of a passion project.

Despite the fact that Brandherm + Krumrey Interior Architecture had only a year to revamp the 120,000-square-foot building, one of three on Birkenstock’s campus, Brandherm and Sabine Krumrey were proud to be involved. “Birkenstock is very famous not only in Germany but also all over the world,” Brandherm says. The chance to visit the factory, another of the three buildings, was a thrill. And the duo were inspired by the design history of the company. “It was created around the development of ergonomic shoes made with only natural materials,” Brandherm explains.

There wasn’t much of a brief from the busy clients. “They had no time to meet with us,” Brandherm says. So she and Krumrey leaped into the project on their own. They devised a simple open studio for the shoe designers while focusing on improving the reception area and inserting an adjacent lounge. The choice of materials throughout was informed by those of Birkenstock’s famous sandals: leather, cork, and brass—plus rough-sawn oak to stand in for the trees that Birkenstock wearers so love to hug.

What Brandherm and Krumrey definitely didn’t love was the double staircase that crisscrosses reception’s triple-height atrium. “I almost had a heart attack when I saw it,” Brandherm says. But revamping was not an option for budget reasons. So the pair did the same thing that someone renting an apartment would do—they relied on a paint job. Taking Birkenstock’s signature blue, they modified it with a substantial amount of black. They then applied the more subdued result to the staircase’s steel. The logo painted on the wall behind the reception desk is in the same color. Meanwhile, the desk combines an oak base with an upper volume wrapped in a super-tough hide that Birkenstock sent over from the factory. “It’s not a leather that’s normal for interior design,” Brandherm says. “It was tricky to work with, but the reward is the intense textural quality.”

From where the receptionists sit, they have an oblique view of the lounge, distinctly the project’s marquee item. Brandherm and Krumrey call it an “island” or a “cocoon” or a “wave”: a long oak platform that curls upward at the far end, creating a wall to anchor shoe displays, before doubling back partway as a canopy. “This was our way to show off the most special shoes, since it’s where Birkenstock and clients sit and chat,” Brandherm says. They might sit on bar stools at a counter constructed, from 100-year-old oak, to cantilever over a bronze-clad console that extends along one side of the platform. Or they might prefer seating groups composed of leather-covered club chairs and Patricia Urquiola sectionals. Jasper Morrison side tables, which are cork, resemble giant abstracted chess pieces. Light fixtures look appealingly contemporary, slightly more tailored than one might associate with Birkenstock. Swedish floor lamps have tripod bases in natural-finished ash and conical shades in black-lacquered aluminum. “No one knows those lamps in Germany,” Brandherm confides. Much better known, Ronan & Erwan Bouroullec’s pendant fixtures, also black, hang at staggered heights for visual panache. Details matter—as with a good pair of shoes.