At Home With Mary-Kate and Ashley: Tour Their LA Boutique The Row 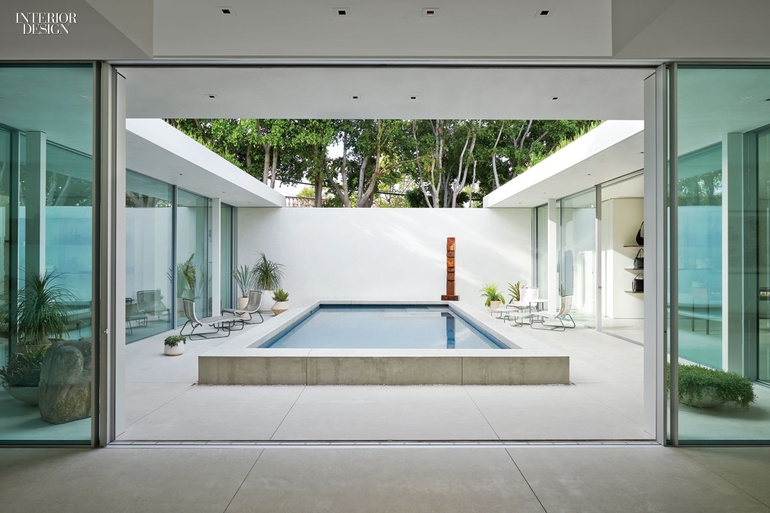 Déjà vu? We certainly thought so, walking into the Row, Mary-Kate and Ashley Olsen’s fashion boutique tucked away on Melrose Place in Los Angeles. That’s because the two-story building, or at least some of it, formerly housed Sally Hershberger at John Frieda, a hair salon by Mehran Shahverdi that graced the cover of Interior Design many years ago.

The current clean, mid-century look, unfolding around a courtyard with a reflecting pool, seemed just like we remembered. In reality, it turns out, the Olsens, twin actresses turned fashion stars, had hired Courtney Applebaum Design to collaborate with Montalba Architects on a renovation that involved virtually demolishing and rebuilding everything. That’s not just Sally Hershberger’s rear section where the Olsens, native Angelinas, got their hair cut as tweens but also the front of the building, which had been a warren of offices. The fact that the result so authentically recalls the original, a stucco building from 1939, was precisely the goal.

David Montalba describes the collaboration as “like tennis, learning how to play well together.” As for Applebaum, she calls it “fun and comfortable.” Their opening volley centered on a feasibility study. Was the site right for the Row’s first retail location, after eight years of selling through such stores as Barneys New York and Bergdorf Goodman? (The Council of Fashion Designers of America has already named the twins Accessories and Women’s Wear Designer of the Year, and they’ve now been nominated for both categories again.) Once Applebaum and Montalba deemed the site good to go, initial broad strokes were to unify the ground level and open up its 3,800 square feet.

Down came a colonnade in the courtyard, but the pool stayed in the same place. “It’s the first visual when you enter the Row,” Montalba says. “Then to the left and right are more or less symmetrical wings, a nice coincidence, since the clients are twins.” That’s the pavilionlike plan at its most basic. With all the glass a Swiss “invisible wall” system with a superthin profile, plus a long skylight one of the Olsens’ big requests could be met: No typical retail lighting, please.

Nothing else about the setting is typical either. Exquisitely appointed in antique, vintage, and custom furnishings, one wing is styled as a “living room” and the other as a “dining room.” These are rooms anyone would be thrilled to settle into. Who wouldn’t want to try on shoes while seated on a daybed by Charlotte Perriand, lounge chairs by Lina Bo Bardi, or a settee by Finn Juhl? These are just a sampling of the pieces  that Applebaum assembled. Jean Royère, Jean Prouvé, Poul Kjærholm, and Paul McCobb make appearances, too. So, you’re probably wondering. . .yes, it’s all for sale, including artwork. “That was the plan from the start,” she says.

With all this modernist eye candy in starring roles, merchandise almost plays as a subplot. Again, that’s every bit intentional, since the Row is a brand devoid of, well, over-branding. Look all you want for a hint of glitz. None’s to be found. Sumptuous materials and impeccable tailoring are what convey the discreet luxury. Clothing is literally in the background, hung on stainless-steel racks against the wall, perhaps behind a sofa, and shoes line wall-hung shelves. There’s a little less understatement, admittedly, when it comes to handbags, the Row’s best-selling accessories. Each wing has a “hero wall” devoted to them, Montalba says rightly so, since each bag costs a small mortgage payment. In one wing, bags are showcased in a grid of compartments inside a stainless box that appears quite ethereal but actually weighs 1,200 pounds, requiring reinforcements for its supporting wall. In the other gallery, stainless shelves for the bags protrude like fins.

As tastefully restrained as this setting is, there is in fact one spot where branding can be spotted. Applebaum found a French mid-century brass door pull and had it subtly etched with the Row logo’s T and R.