A Yen for the Past: Farewell to Tokyo’s Hotel Okura 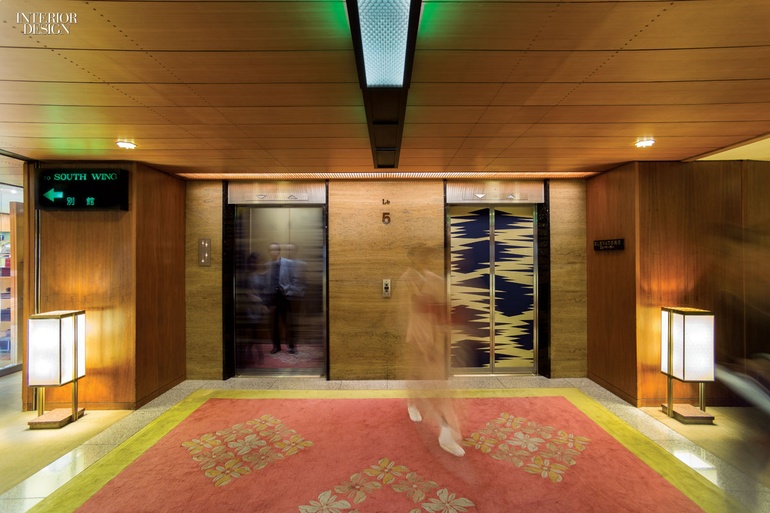 If ever there was a threshold epitomizing the contrast between the cold shoulder of an unknown city and the warm embrace of hospitality, the entrance to Tokyo’s Hotel Okura must surely be it. From the instant a white-gloved hand pushes open a glass door and admits you to the lobby, harsh streets are a distant memory. You find yourself instead in a hushed and glowing sanctuary where traditional Japanese decor meets modernism, circa 1962.

Conceived under the leadership of Yoshiro Taniguchi, this is a world of paper screens and pine paneling, silk wall covering and mustardy carpet. Frozen in time, yes, but also timelessly appealing. You sink into one of the low, round chairs in the lobby lounge not so much because you crave a lesson in design history as because you simply cannot resist the seductive comfort of this place.

So it’s hard to believe that, in August, the Hotel Okura lobby’s glass doors will close for the last time the result of an overhaul in anticipation of the 2020 Olympic Games. Though a wing built later will remain, the 11-story, 408-room main building will be torn down and replaced with two glass towers, one 38 stories and the other 13. The hotel’s management and construction magnate investors believe this scenario represents a more sensible use of a high-value property, across the street from the U.S. embassy.

Protest at home has been more subdued. Intended to introduce an international clientele to Japanese aesthetics more than to push conceptual boundaries, the hotel received a lukewarm welcome from local architects, and that lingers today. A vocal exception is Hiroshi Matsukuma.

A professor of architectural history at the Kyoto Institute of Technology and the chair of the Japanese chapter of the preservation minded Docomomo International, Matsukuma says the building is a misunderstood cultural treasure, created at a moment when Japan straddled past and future. “For the architects who designed it, traditions of craftsmanship and wood-framed construction were as natural as air,” he notes. “They valued the old ideas of beauty but were also looking forward to a new era of design.”

The man responsible for putting the hotel’s design team together was the scion of one of Japan’s most powerful business families before the Second World War. Educated at the University of Cambridge, Kishichiro Okura then served as chairman of the Frank Lloyd Wright designed Imperial Hotel, Tokyo’s premier Western-style lodging, in the 1920’s and ’30’s. As the 1964 Olympics approached, and Japan took on a new role in global politics and economics, Okura decided to turn his family estate into a luxury hotel of a different sort, both thoroughly modern and quintessentially Japanese.

That concept was not unique. Indeed, architecture journalist Tatsuo Iso calls the melding of modernism and indigenous aesthetics “the architectural theme of the 1950’s.” More remarkable was the team that Okura assembled to realize his vision: 12 prominent architects and designers with Yoshiro Taniguchi at their helm. Taniguchi’s family had run a kiln in Kanazawa, instilling in him a deep respect for Japan’s craft heritage. When tapped by  Okura, he was in the midst of designing the crown prince’s residence.

A key challenge for the hotel job lay in representing centuries of design history without creating a theme park. Okura reportedly wanted an arched wooden bridge in the lobby. Taniguchi skillfully translated that idea into a mezzanine. “In the hands of a lesser designer,” Iso says, “it could all have been very kitsch.”

In a thoroughly collaborative process, ideas came from all the team members. The facade’s distinctive horizontal lines, a reference to Edo period castle fortifications, were a suggestion from the director of architecture at Japan’s postal service, Hideo Kosaka. He also contributed the exterior walls’ geometric tile-and-plaster pattern, inspired by a finish common in houses from a few centuries later. Inside the hotel, individual team members took on specific assignments, from the grand banquet halls to the quiet salon where the board game go was played.

The lobby was Taniguchi’s. He imbued it with the essence of the project, commissioning artisans to lacquer the tables a lustrous red and assemble intricate cedar screens for the windows. Elevator doors are surfaced with silk in a traditional broken diamond pattern. With the reception desk tucked discreetly away, down a hall, the lobby was intended as a public space for all to enjoy. It went on to welcome Richard Nixon, Princess Diana, and Madonna.

Its spirit will be reproduced in the new hotel, with as many of the original materials as possible salvaged, according to senior manager of public relations Kazuko Oguri. “The lobby is the heart of this hotel. We’re not going to replace it with cold black marble,” she says. To design the new lobby, management even commissioned Taniguchi’s son’s firm, Taniguchi and Associates best known internationally for New York’s Museum of Modern Art.

Such assurances provide little comfort to Matsukuma. “People come here to mark the important moments in their lives, the weddings and family gatherings. So many memories have soaked into this space,” he says. “Is it really going to vanish?”