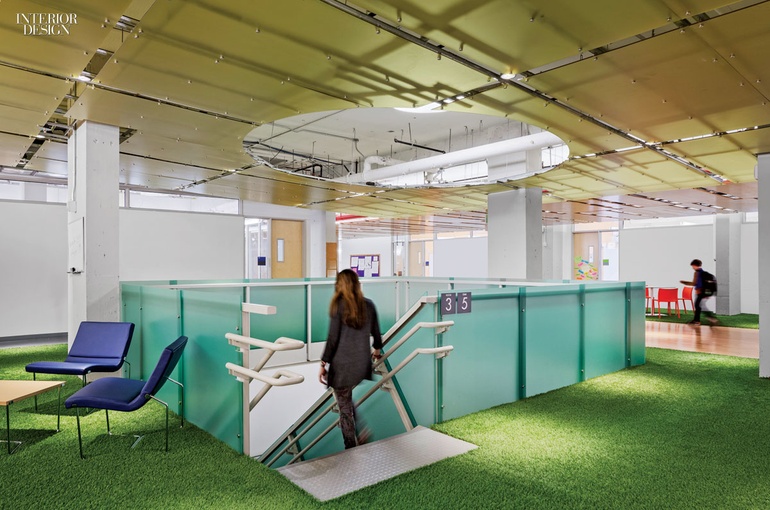 Progressive education builds on a rich history. Take the New York landmark that was constructed in 1891 to house a Roosevelt Hospital operating theater, literally a room with tiered seating where medical students gathered to view surgeries performed under a skylight. The tiers have now been gutted and the med students replaced with gifted ones in kindergarten through seventh grade, as Davis Brody Bond has transformed the space into the centerpiece of the private Speyer Legacy School. This atrium still benefits from the old skylight, while an open staircase hugs the perimeter, and an elevator tower rises through the center.

The school also occupies part of an adjoining apartment building. Throughout the 85,000 square feet, total, Davis Brody Bond partner Christopher Grabé left most ceilings open, both as a teaching tool, showing how plumbing and electricity work, and as a metaphor for transparency in general. (Also transparent—in teal and blue, the school colors—are the resin panels of the stair balustrades and elevator tower.) There are dropped ceilings, however, in hallways and the cafeteria. Panels are plywood laser-cut to evoke a tree’s leafy canopy.

Outside the classrooms, patches of artificial turf give the “feeling of being in a front yard,” Grabé says. There’s real greenery outside the building, and the redbrick facade, with its arched doorway, has been restored. Grabé sees it as a daily lesson in architecture.