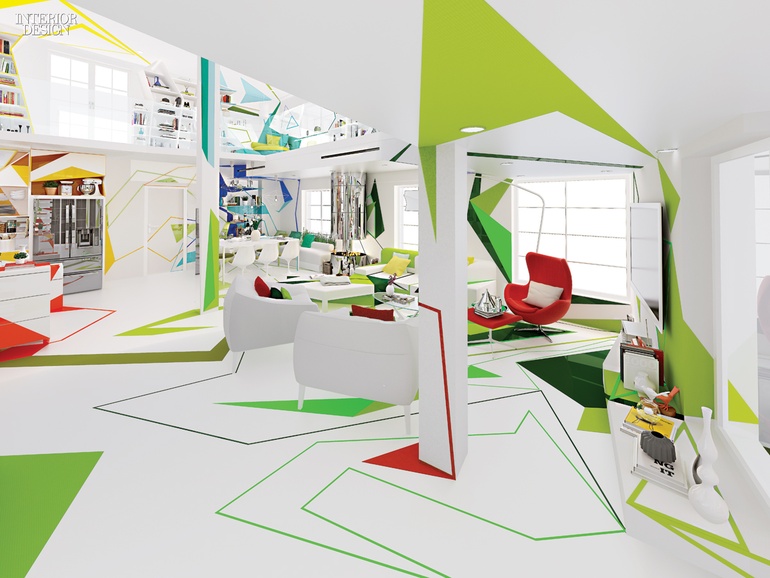 When two Bulgarian chemists hired Brani & Desi to remake their house in Sofia as a paean to expressionist art, the design process proved to be nearly as analytical as a scientific formula. Not that you’d know it from the surface of things. Branimira and Desislava Ivanova, the firm’s identical twin founders, seemingly attacked the 2,400-square-foot white shell with anarchistic fervor, conjuring a multicolored riot of asymmetrical shapes and sharp angles, in latex paint, across the ceilings, the walls, and the epoxy floors.

The method behind the madness? Color analysts say that green is most pleasing to the eye, so green tones unify the palette. Red, to balance them, is supplied primarily by textiles, notably the upholstery on Arne Jacobsen’s Egg chair in the living area. The Egg’s brightness and curves play off a pair of white square lounge chairs by Studio Massaud. “Certain colors have an affinity for certain forms,” Desislava Ivanova says, citing Wassily Kandinsky’s theory of correlation. “We combine for impact on the soul.”

An appetizing combination of orange and yellow dominates the kitchen. Appliances introduce the gleam of stainless steel. It’s echoed by the lighting over the island: a trio of chrome pendant domes.