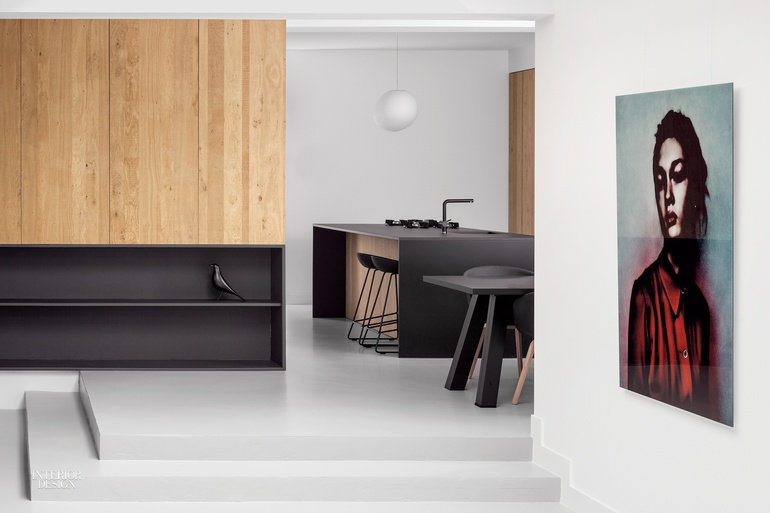 In the middle of a residential block in a trendy Amsterdam neighborhood, where the streets are named for Dutch old-master painters, one structure stands out. It’s brick, like its neighbors, but distinctly utilitarian: a 1950’s garage. When a marketing executive at a travel Web site purchased the ground level, it had been converted into a residence. However, she wasn’t satisfied with the disjointed layout.

Renovation fell to I29 Interior Architects partners Jeroen Dellen-sen and Jaspar Jansen. They repaired the concrete floor slab and poured epoxy resin the pale gray of an overcast Dutch sky, the real one being visible through the long skylight they added above the center of the space. The epoxy also serves as a smooth, seamless base for I29’s signature minimalism, enriched by natural textures. “When you reduce the number of materials, what remains becomes much clearer and more powerful,” Jansen explains.

More than half the 2,500 square feet was already shared by the living area and, opposite it, the open kitchen and adjacent dining area. These two are spanned by a single wall of cabinetry in rough-sawn oak that received a matte acrylic coating to preserve the wood’s raw appearance. A wide front panel rolls side to side, concealing either the bookshelves at the dining end of the built-in or, in the kitchen, a counter-height compartment for items that would be a nuisance to stow after daily use, such as the coffee maker.

The kitchen’s only work surface is the island, but it’s a substantial 3 by 10 feet. Its counter integrates a cooktop—nothing more than four gas burners interrupts the charcoal-gray synthetic ceramic. (Heat-proof as well as waterproof, of course with the  durability of the real thing.) The downdraft vent for the cooktop virtually disappears into the counter when retracted, thanks to a cap in the same material. And the sink’s simple faucet color-coordinates.

Charcoal gray carries over to the powder-coated steel surrounding the gas fireplace in the living area. I29’s idea for the rug here was that accents in tonal shades of green would simulate moss growing on a gray ground, matching the floor. The complicated design, which took Nepalese weavers the better part of a year to finish, anchors a mix of contemporary seating, a place for the marketing executive to park when she’s not traveling.