Ski In, Stroll Out: Reiulf Ramstad Designs a House for all Seasons in Norway 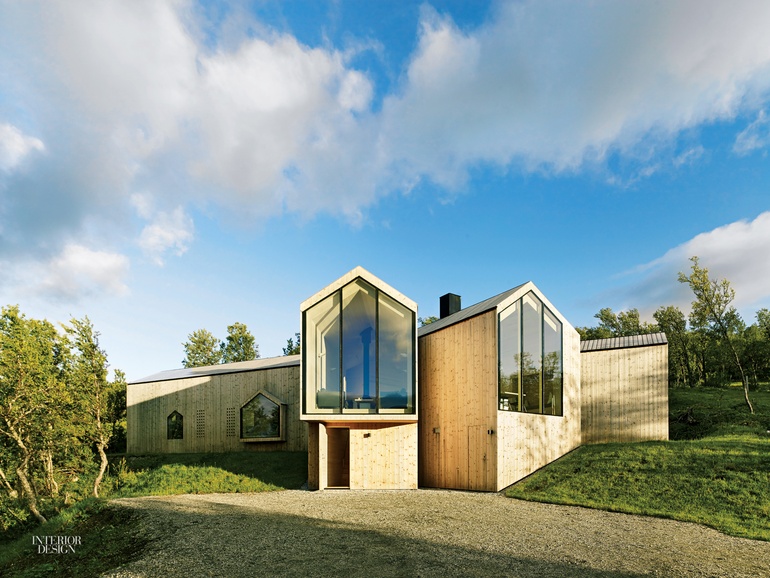 The year was 1129 when the pine trees used to build the oldest wooden church still standing in Norway were chopped down. In the centuries that followed, fanciful chapels ornamented with winged dragons were constructed with the abundant and cheap timber. More prosaically—in a land where nature, harsh and beautiful, reigned supreme—wood was used to build the cozy houses where farmers lived year-round and the simple mountain sheds where herders sheltered in the summer.

An unapologetic expert on the built history of the Norwegian countryside, Rieulf Ramstad returned home shortly after graduating with his doctorate in architecture from the Università IUAV di Venezia to specialize in contemporary architecture informed by vernacular traditions. That’s why an Oslo couple asked Reiulf Ramstad Architects to design a family weekend house near Hol, 140 miles inland, on a mountain that’s essentially cut off from civilization during winters that last for over half the year. “It’s completely surrounded by snow,” he says. Forget cars, even SUVs. You need a snowmobile or skis for the final leg of the journey.

However, the remoteness didn’t stop the city couple from requesting a deluxe level of comfort, tied up with a bow, in square footage almost twice as much as Ramstad felt was necessary. “Lots of places up in the mountains are ruined by very ambitious projects with an urban character,” he says. “I think it’s important when you leave home to live simply, for contrast.” He therefore took it upon himself to gently persuade the couple. “What is the minimum you need?” he asked.

Following a series of sketches, he hand-assembled several scale models from laser-cut pieces of plywood and balsa, then walked the couple through each choice, conceptually speaking. They settled on a design for a 1,400-square-foot main house with lofty cathedral ceilings, a modest bedroom for the couple, smaller rooms for the three children, and a single bathroom, albeit with a sauna. Across a deck from the kitchen door, a 160-square-foot cabin would accommodate guests.

"When you build in a special landscape, you do it in a precise way."

Like the Norwegians of old, he built with pine logged locally. This gave him access to the most durable and aesthetically desirable lumber, cut from the core of the tree. On top of the roof’s waterproof membrane, narrow pine planks are laid like decking, with small gaps between to allow for expansion. Untreated, the pine has weathered softly. “You can find that warm gray tone on the mountain and in the landscape,” he says. He used wider boards, with knots, for vertical siding. Clear pine heartwood boards line virtually every surface inside. Though they’re protected from the weather, they would have yellowed naturally with age, so he injected a preservative to maintain what he calls the “fresh character” of the wood.

The innovative layout, an asymmetrical Y, recalls a trio of telescopes with a “lens,” or glass wall, at the end of each gable to focus the gaze on a view. “When you build in a special landscape, you do it in a precise way,” he explains. Nearly all the windows have a distinctive peaked pentagon shape that, to him, recalls the arched openings in Norway’s typical sheds. These windows are mostly inoperable—they’re paired where necessary with inconspicuous pine panels that pop open for venting.

Beneath the living room’s glass end wall, an inconspicuous volume, partly buried in the hillside, contains the main entry. This windowless space connects to a bathroom, ski storage, and a mechanicals room with a ground-source heat pump that’s piped down to wells drilled thousands of feet deep. Visitors who head directly up the stairs will arrive at the point where the public rooms, in the two arms of the Y, join the bedroom wing, the Y’s base.

Where feasible, seating is built in—softened by cushions covered in an exquisite pale gray local wool. The dining table is freestanding, but it’s made from the same heart pine as the ceiling, walls, and floor. Dining chairs are Verner Panton, as are the stools at the kitchen counter. Sometimes the chairs and stools get carried out to the deck. “They’re steel with rubber strips,” he notes. “So you can forget them outside for a day or two.”

The deck is somewhat sheltered from the wind, and he points out that the gravel parking area is on the south side of the house, kissed by the sun. But that’s usually a distant promise. Norway is, after all, the land of Frozen, with a thick blanket of the white stuff lingering on this mountain. There’s plenty of time for skiing and skating, not to mention kiting, a thrill that marries paragliding and snowboarding. Let it snow!