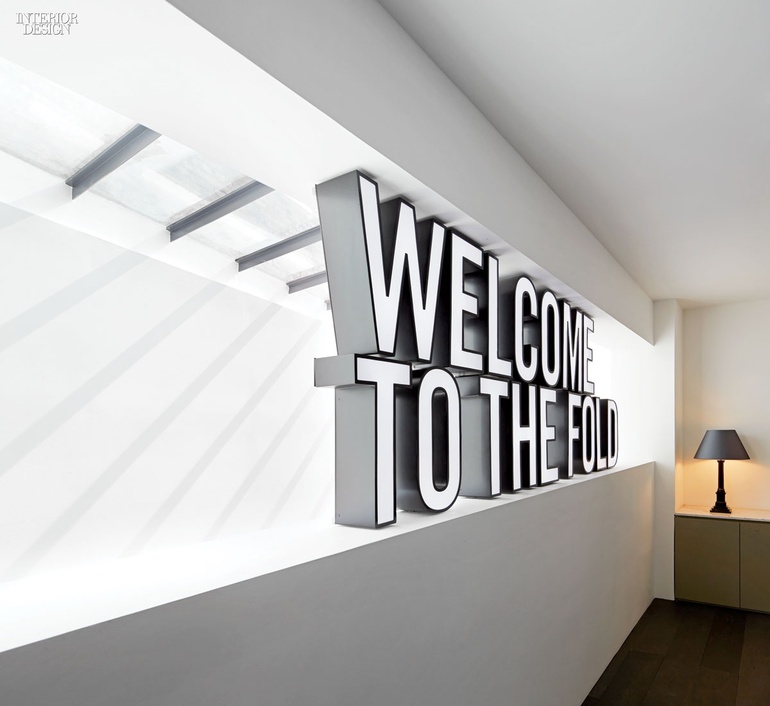 The street is unexceptional. It’s medieval in origin, like all the City of London, but lined with anonymous’60’s spec office buildings more recently colonized by architects, graphic designers, tech start-ups, vaguely defined creative consul-tancies, and advertising agencies. One facade, however, stands out. On a cold day, as weak snow turns to freezing rain, people are stopped in their tracks by the unexpected sight. Commercial rents in London are eye-wateringly expensive, so it’s unusual to find so much cubic footage given over to an art installation.

Huge street-front windows reveal a gallery-esque interior where five gray figures are lifted into midair by their upheld umbrellas. They look like a confluence of Mary Poppins, René Magritte, and Juan Muñoz, hovering somewhere between commuters and angels—no floor in sight. That’s because this gravity-defying realm is actually the top of a double-height volume that plunges 8 feet below sidewalk level.

Commissioned from a Czech artist, the figures inhabit their environment with confidence. Once you take your gaze off them, however, it becomes clear that the real star is less the figures themselves than the space in which they float. Credit for that goes to Paul Crofts Studio, which gut-renovated the two-level, 7,000-square-foot office for Fold7, an ad agency that counts British Airways and Nike as clients.

“Fold7’s slogan is Welcome to the Fold,” Paul Crofts starts. “The idea was therefore to create the inviting feel of a hotel lobby.” His introduction of a hotel aesthetic is a smart metaphor, as it manages to avoid typical corporate ennui while establishing the concept of the office as a kind of cocktail of work and relaxation.

A hotel concierge would be perfectly at home behind Fold7’s reception desk, clad in brass with an amberglow emanating from a horizontal slot at the base. From here, the eye is led to floor-to-ceiling open shelving stacked with books and curios  collected by founder Ryan Newey. The shelves double as the outer walls of a conference room. Around the corner, sections of another shelf-wall pivot outward—a stealth doorway.

The rest of the ground level is dedicated to communal space. “A very generous gesture from Ryan,” Crofts says. Next to the conference room, the café centers on a marble-topped bar, and high-backed booths at the back define private conversation spots. Fronting everything, facing the gallery and the street, is a lounge of refreshing simplicity.

We’ve become used to ad agencies self-indulgently trumpeting their creative credentials via a plethora of neon lights, street signs, foosball tables, and self-consciously gathered gewgaws either masquerading as found objects or ostensibly “curated” into a composition of stuff. There are a few instances of that here, for example a meeting room where a wall sports the phrase “Smack my pitch up” in, yes, ice-blue neon.

Nevertheless, the decibels are kept to a conversational level rather than a scream. The humor truly works in a conference room lined with cuckoo clocks “to remind people that meetings shouldn’t drag on,” Crofts notes.

In the same room, the tabletop is screen-printed with an angular pattern that echoes the chevrons of the carpet found on most of the lower level. The subtle details throughout include exquisite ceiling fixtures and sconces.

A sculpture in its own right, a blackened-steel suspended staircase connects both levels by passing through the gallery. Far below the floating figures, its floor is a platform built from Douglas fir boards finished with white lye to achieve what Crofts calls “a modern Scandi look,” in contrast to the upper level’s more residential stained-oak planks. Sunken into the platform are a pair of table-and-seating setups similar to what’s found in a traditional Japanese restaurant. They’re meeting areas, referred to as the Dry Jacuzzis. While the nickname is admittedly jokey, the solution is far more sophisticated than the garden sheds or Airstream trailers one sometimes finds turned into meeting spots.

Thanks to the double height and large windows of the gallery, the lower level’s office area, farther into the building, never feels like the basement it is. Workstations accommodating 45 employees are pushed to the rear without feeling cramped. Walking through, a staff member explains that Fold7’s philosophy is all about ambition. To prove it, the word ambition is even scrawled in a supergraphic on a wall. But the agency is also all about layering, the idea that there are messages embedded at every level of visual experience. Someone points out a sub-Banksy graffiti-stencil rat on the bottom corner of a door.

Crofts has taken the myriad messages and integrated them into a superbly generous, elegant office space that, perhaps paradoxically, perhaps perfectly appropriately, conveys an image of joyful professionalism. What better expression of a brand could there be?