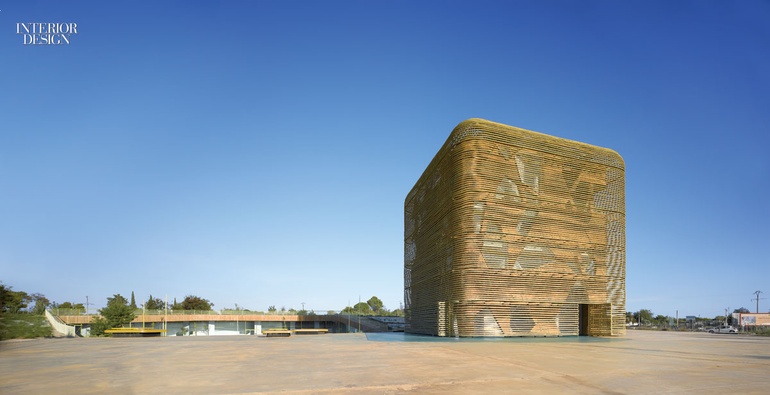 A bale of hay in the middle of a field might seem an unlikely architectural inspiration. But the hay bale has positive associations—abundance and productivity—and decent provenance as an artistic fixation. (Thank you, Claude Monet.) Add the boundless creativity of Spanish architects to the mix, and a humble agricultural commonplace can contain a world of complexity.

For example, what if a material recalling hay would wrap a mysterious cube of a structure rising amid farmland? What if this surrealist bale ultimately revealed itself to be just the uppermost section of a much larger facility underground? And what if the two sections made up a convention center that’s the antithesis of corporate—really a futuristic fun house? That’s what you’ll find in Villanueva de la Serena, a hamlet in the county of Las Vegas Altas in Spain’s remote western Extremadura region. In recessionary 2008, regional leaders announced an open international competition for a conference and auditorium facility, in part to compete with similar offerings in Mérida, a half-hour drive away.

The big message from tiny Villanueva? We’re no hayseeds.

Those ambitions led to something of an architectural marvel, the Palacio de Exposiciones y Congresos Vegas Altas. It’s the breakout work of four architects: Luis Pancorbo, José de Villar, Carlos Chacón, and Inés Martín Robles. For the convention center, they shared a vision of a “giant bale of hay against a flat horizon—free and fertile,” Pancorbo says. An austere plaza surrounds this perfect 69-foot cube, with radiused corners, before slanting downward into the ground to meet the glass front of an arced pavilion, the entry and pre-function space for a mostly subterranean 800-seat theater and 275-seat lecture hall. Everything adds up to 74,000 square feet.

"The feel is dizzying yet exhilirating, both entirely otherworldly and pragmatically innovative"

“We thought of the project as a threshold between worlds,” Chacón explains. The team achieved that goal on many levels: between aboveground and underground, architecture and landscaping, rural and urban. “We buried most of the program to create the plaza for the locals,” De Villar says. “Meanwhile, the bale of hay represents the project’s public persona. It had to have enough scale to be seen as an isolated object in the landscape, like a church spire.”

On a less emblematic, more literal level, the “hay” of the bale turns out to be evenly spaced lengths of rope braided from polypropylene fibers in natural, yellow, and green. “The rope cuts solar heat gain by half,” Martín Robles notes. Functionally, the volume offers the clearance needed for the auditorium’s fly tower. There’s also, in ascending order, a separate entry for after-hours and staff access to the box office, an office area with an adjacent meeting room, rehearsal rooms, and a restaurant. On the top two levels, freestanding, asymmetrical enclosures for the rehearsal rooms and restaurant create pleasingly bizarre, seemingly capricious interstitial spaces dappled with sunlight from equally irregular openings in the facade.

The feel is dizzying yet exhilarating, both entirely otherworldly and pragmatically innovative, a hallmark of much contemporary Spanish architecture. One appreciates how the bale’s ensemble of rope courses and slightly gold-tinted concrete complements the roughness and palette of the romantic Extremadura setting. Traditional materials, noticeably applied by hand, are seen in new ways, the vernacular and ecological empathy broken up with purely contemporary interventions.

Welcoming visitors in the entry pavilion, an undulating wall of shimmery white stretched fabric is punctuated by randomly placed openings outlined in acid green. It’s a where am I? moment, the perfect preparation for a deep dive into an even less familiar netherworld. In the theater, the mood shifts to dark anticipation, with a diamond-pattern mirrored polycarbonate ceiling and translucent corrugated polycarbonate walls tinted green and backlit, rendering an effect inspired by Victor Vasarely’s op art. The saturated glow, paired with the reflectivity, initially shocks the senses. It’s dazzling, liquid, and visually tremulous. Halucinante, as young Spaniards say—even if many of the  architectural moves are really about logic, such as below-grade spaces making the facility easy to cool and acoustically pure.

An entirely new and unforgettable experience, it required faith on the client’s part as well as close instruction for the contractors. The design adheres to principles of efficiency and sustainability while exploring the fringes of abstraction, ambiguity, and deconstruction. The design furthermore announces De Villar, Chacón, Pancorbo and Martín Roble’s arrival in a lineage of Spanish thinking that pairs organic, earthy facades with strikingly progressive interiors. Now the question is: Will these qualities make the convention center as much a popular business facility as an archi-tourist destination? The architects are sure it will. And the region has bet the equivalent of nearly $12 million that they’re right.