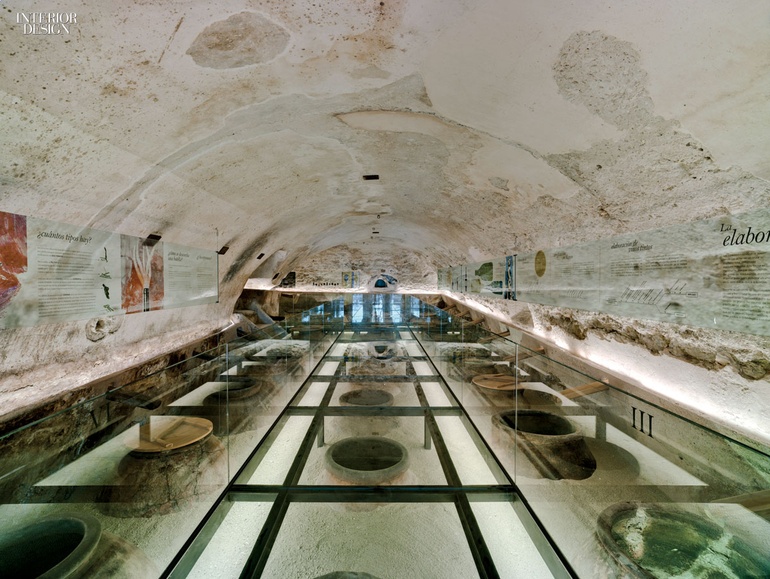 A small but active wine industry, dating back to the Muslim caliphates of the ninth century, continues to this day in the autonomous province of Murcia in southeastern Spain. The region boasts three distinct DOs, or Designations of Origin, mostly for its robust reds, and the local wine trail draws oenophiles and gourmands from across Europe. Now there’s a new attraction: the Escuela del Vino, an interpretive center in a landmark building in the small town of Cehegín in Murcia’s hilly interior.

Funded by the European Union, the project was initiated by municipal officials, who sought to celebrate the region’s storied viniculture, and skillfully executed by José Luis López Ibáñez. His firm, Inmat Arquitectura, had come to the attention of Cehegín’s mayor because of an innovative, potentially tourist-friendly development that López designed for a nearby vineyard: He sited casitas among the rows of vines, enabling the residents to harvest grapes to turn into wine themselves or to sell to established wine-makers.

For the Escuela del Vino, in the center of Cehegín, town leaders designated a historic site that has its own connection to wine. The edifice was constructed in the 17th century as an administrative center for the Orden de Santiago, a military-religious group that was formed to fight the Crusades and started making wine after they were over. Knights bought a portion of nearby grape growers’ harvests. Once the grapes were pressed, in the building’s courtyard, the juice flowed into the cellar, traveling along channels cleverly carved into low-ceilinged limestone vaults, then into pine scuppers emptying into rows of large urns in unglazed terra-cotta. The urns were partially sunken in the earth to keep the maturing vintage at cool temperatures until it was fully aged.

"The essence of the project is how we elevated the historic character while introducing contemporary elements."

By the time López encountered the knights’ efficient, if low-tech, wine-making apparatus, the future Escuela del Vino had lain disused for nearly a century, the subterranean vaults cobwebbed. To him, however, the forelorn structure was  also beautiful. “Full of history reflected in its handmade character, with the patina of time,” he says. A solo practitioner, he hired temporary architecture and design staff and assembled a team of experts to help him on the project—consultants in historic preservation and graphics as well as wine.

Restoration was of the first order. “We respected everything that was there,” López notes. That included the chalk marks that wine-makers left, centuries ago, on the walls behind the urns when counting the months and years as vintages matured. “The essence of the project is how we elevated the historic character while introducing contemporary elements,” he says. In other words, it’s a delicate balance, treating history very respectfully but not getting carried away with it.

Today’s visitors enter the sub-terranean Escuela del Vino, a 3,700-square-foot L shape, at the end of one leg of the L. From here, a glass ramp slopes gently down before leveling out to become what he describes as “a carpet of glass, a walkway that’s transparent and colorless but full of fleeting reflections. We used glass so as not to conceal the existing architecture.” The walkway is raised to float above the three rows of urns that extend the length of this long vaulted space, which serves as a gallery.

Also glass, balustrades separate visitors from the text and illustration panels suspended along the sidewalls. The exhibition consists mostly of material taken from a book by a Cehegín native who became an award-winning sommelier, plying his trade at two of Spain’s greatest gastronomic temples, Arzak and El Bullí. His name is Pedro Martínez Fernández, and the book, El A, E, I, O, U del Vino, traces wine’s journey from planting to tasting. For the Escuela del Vino, he furthermore advised López on such matters as how to design the kitchen to multifunction as a teaching-learning environment.

While virtually all the urns remain in the first leg of the L, simply sunken in place to increase headroom for the glass walkway, a third of them were removed from the second leg to create space for the pine flooring of circulation paths and various function areas. A small bodega, or wine shop, takes the minimalist form of backlit shelving units. At the far end, an open space hosts lectures and concerts, while the kitchen supports catered functions and cooking classes—with wine pairings, of course.

In the kitchen and a small gallery, up-lights are tucked discreetly into the wine runnels above the urns. “Almost everything new is hidden as much as possible,” he says. An exception is the raw steel, “a very elemental material that works well with the historic parts of the interior,” he notes. A steel framework supports the glass walkway in the entry gallery. Sheet steel surfaces the treads and risers of a staircase in addition to forming the shelving units. If you look closely at the wine displayed in them, you’ll see that the necks of the bottles are gripped by built-in pine yokes, further evidence of López’s deft touch.