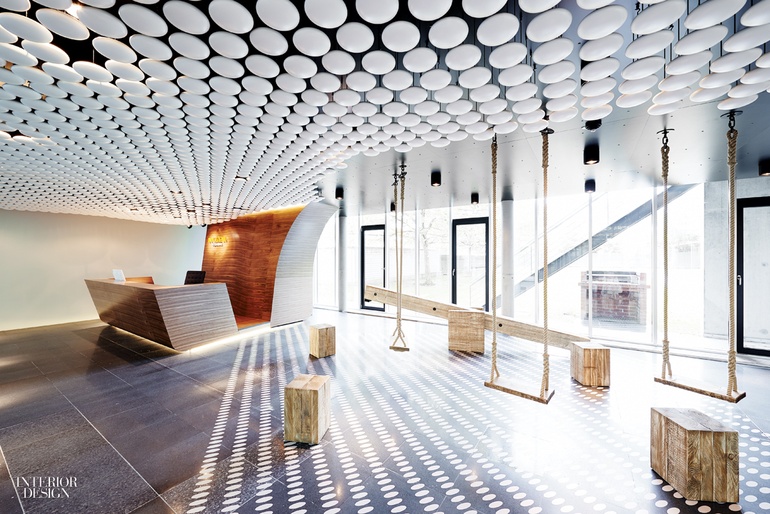 Germans have a reputation for an almost fanatical devotion to efficiency. That goes double for the business culture. Yet the moment you walk into Frankfurt’s Innocean Worldwide Corp., where the soaring reception area is furnished with a seesaw and a trio of swings—yes, you read that correctly—it’s clear that there are breezier priorities at play. And it turns out that the office isn’t, strictly speaking, German. It’s the European headquarters for an advertising agency founded in Seoul and owned by the Hyundai Motor Company. “Innocean is a dynamic organization, as a lot of South Korean businesses are. It’s fastmoving, flexible, and aggressive in the market, and executives were looking for a workplace that would reflect that energy,” the Ippolito Fleitz Group’s Peter Ippolito says. In other words, he and Gunter Fleitz needed to design a functionally innovative workplace that could furthermore serve as an outsize branding tool. “To leave a mark on the scene,” Fleitz adds—and the jaunty wooden seesaw and swings do just that. “They give the perception that Innocean is an organization that thinks in surprising ways.”

This abbreviated playground isn’t the only surprise visible through the comparatively sober facade of Innocean’s building, a glassy L shape completed in 1995 by a locally notable firm. To reach the reception station, clients from Hyundai, of course, as well as Kia Motors or Turkish Airlines pass beneath a white wave, a canopy made up of thousands of disks suspended from the ceiling. On a wall, an abstracted world map highlighting the agency’s myriad projects is accompanied by its tag line, “Discover Beyond,” in red capital letters.

"They needed to design a functionally innovative workplace that could serve as an outsize branding tool."

Next to the map, an angled passageway takes people from reception, set apart in the short leg of the L, into the rest of the fourstory, 30,000-square-foot interior. One of the first sights there is called the Inno Lab, a glass-fronted think tank for the creative team. Outfitted with bright green carpet, which looks like faux turf, and swoopy white Verner Panton chairs, the room broadcasts the youthful, free-spirited vibe of a tech start-up, despite the fact that Innocean is a $1 billion agency. Farther along, standing out amid an office area’s white-and-gray, a floor-toceiling volume, open on the ends, reveals an inside entirely upholstered in metallic lime-green. “It’s quite animated and fun,” Fleitz says with understatement.

The upper levels offer conference rooms and a lounge. Here, the geometry becomes more angular and futuristic—the architects’ attempt to “Discover Beyond.” Faceted forms protruding from the wall and ceiling of one conference room, for example, conceal storage and mechanicals. A series of folded white planes compose the lounge, a sort of conversation pit. “It’s intentionally slick and graphic, a continuation of the corporate identity,” Ippolito says. Upholstery in Innocean’s red pops from the blobby white forms of chairs.

Compressing the lounge into a relatively small space was another function of the white planes. Because Innocean doesn’t own the building, Ippolito Fleitz faced a host of organizational limitations. There was little flexibility in the layout of the long leg of the L as a consequence of two internal glass walls, running parallel. One creates narrow circulation spaces. Then come slightly wider runs of office areas and private offices. None of which could be altered.

In addition, the glass walls created acoustical and HVAC problems. “Acoustics are the most important factor for well-being in a workplace. Number one. Especially when you have dozens of people in an open room,” Ippolito says. He and Fleitz therefore carpeted virtually all the floors and installed sound dampeners everywhere possible—inside ceiling panels, behind wall organizers. Curtains help, too. To combat the greenhouse effect inside the building, which lacked sufficient air-conditioning for Innocean’s requirements, duct-free units are concealed by sweeping bulges in the ceilingscape. “The systems are not ugly things out in the open. They’re integrated into the architecture, giving spaces a sort of sensual feeling,” Ippolito continues. The effortless look belies the tremendous amount of effort involved.