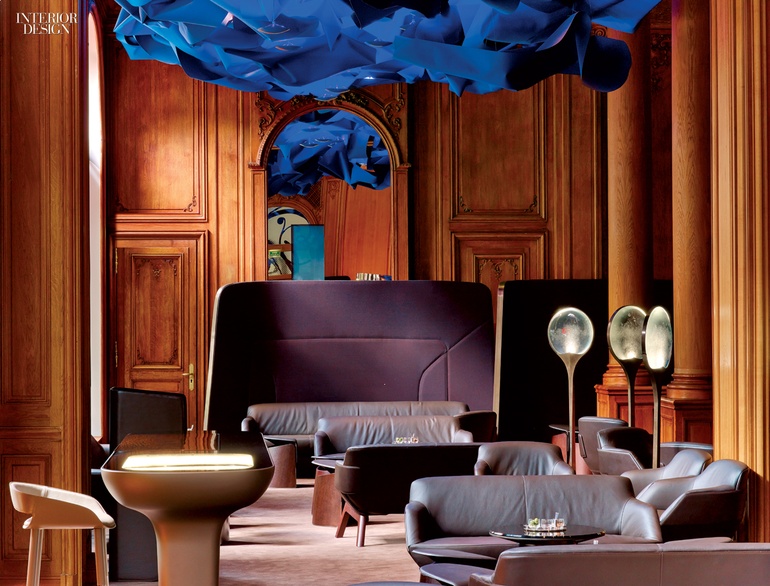 Sometimes the simplest statements are the most radical. Super-chef Alain Ducasse shocked the dining world when he announced he’d be revamping his marquee gastronomic temple—Alain Ducasse au Plaza Athénée, holder of two Michelin stars—by jettisoning all meat from the menu. Instead, he would offer a stripped-down haute cuisine composed entirely of seafood, grains, and vegetables. To oversee an equally stunning overhaul of the soaring colonnaded dining room, the centerpiece of the century-old Hôtel Plaza Athénée in Paris, Ducasse brought back Interior Design Hall of fame member Patrick Jouin, who has created and re-created the restaurant and the hotel’s Le bar: three iterations since 1999.

Jouin now works in partnership with architect Sanjit Manku, and this time their firm, Jouin Manku, was given total freedom to renovate—and innovate. They were furthermore given the opportunity to work simultaneously on both spaces, which share the front of the hotel’s ground level on the Avenue Matignon, the capital’s toniest shopping street. With the inclusion of futuristic forms, both spaces morphed into places unlike any others on earth. Most important was to evoke a sense of wonder. As Jouin puts it, “You are taken into a world of beauty, poetry, and surprise.”

“With the inclusion of futuristic forms, both spaces morphed into places unlike any others on earth.”

The bar certainly does just that. Jouin Manku employed a dramatic intervention to captivate guests on arrival: a mass of blue fabric swirling beneath the ceiling vault. “It’s a troubled, stormy sky, a bit romantic and dark,” Jouin says. A suite of shiny or glowing elements enhances the night-sky ambience. LEDs shine from the top of the podium provided for the house DJ. Mirror-polished stainless steel wraps the base of the bar proper—topped with a counter in clear resin encasing ethereal wisps of white. To give a surface behind the bar a silvery, lunar texture, Jouin Manku coated carbon-fiber panels with stainless steel, a technique borrowed from the nuclear industry. Shimmering against the boiserie elsewhere, the floor lamps’ diffusers, disks of solid glass, suggest full moons.

Optical effects continue in the restaurant, where the overall look is brighter but no less intriguing. Grouped on the carpet just inside the entrance, three mysterious crescents of mirror-polished stainless—the product of 3,500 hours of largely manual labor—turn out to encircle three tables, giving them a little privacy. Like fun-house mirrors or fish-eye lenses, the shiny convex surfaces reflect, magnify, elongate, and bend surrounding objects, particularly the dazzling chandeliers. While they’re original to the space, they’re now engulfed in clouds of crystals hanging on fine wire. “The idea is to disorient slightly,” Jouin explains.

A moment of confusion will certainly be experienced by patrons accustomed to the regency influences that the hotel’s management, the Dorchester Collection, had required for the restaurant’s previous incarnations. Relieved of that constraint, Jouin Manku immediately ditched the ruffled white tablecloths, the rounded high-backed armchairs, and the screens embroidered with vegetablemotifs—all of which seemed heavy and anachronistic, regency being a style popular nearly a century before the art nouveau Plaza Athénée was constructed. “Getting rid of this bogus past,” showcasing a France that’s more contemporary, became a top priority, Jouin says. “Less sugar, less fat.”

“I love the idea of movement. Dance and music are both big inspirations. Fluidity. Flow. Your eye floats freely.”

And less color. The soothing winter-forest palette—white, cream, beige, pale gray, with no complicated patterns—puts guests at ease. “You don’t feel crushed by the decor,” Jouin continues. Chairs with sled bases glide quietly on the carpet. He and Manku insisted that the dining tables’ round tops of raw french oak be used without cloths. “Everybody told us you can’t do that in a gastronomic restaurant. There were all these codes, this ultra-refinement,” Manku recalls. Oak appears again as a canopy arcing over a banquette. The shape has maritime overtones suggesting both a ship’s hull and a wave.

Indeed, scarcely a straight line or sharp corner interrupts the expanse of gently rounded forms. “I love the idea of movement,” Jouin enthuses. “Dance and music are both big inspirations. Fluidity. Flow. Your eye floats freely and wanders unguided.” Eyes are inevitably drawn to an arched mirror set into the wall at the far end of the room, when, come nightfall, the glass becomes transparent, revealing shelves behind. They’re lined with a museum-worthy array of vintage cutlery, glassware, serving dishes, and other gastronomic relics drawn from the hotel archives and from Ducasse’s collection. The Cristofle silver-plated knives, forks, and spoons and the Cristallerie Saint-Louis champagne coupes on display evoke earlier eras of French craftsmanship and serve to keep the history of the restaurant alive, even as it moves so confidently into the future.