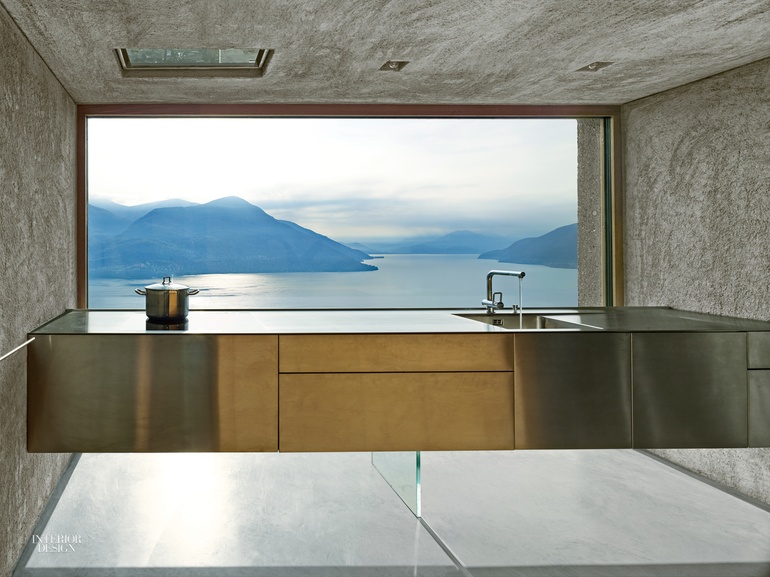 Talk about a spectacular site. Vertiginous bordering on precarious, it offers heart-stopping views of Lago Maggiore and the Swiss Alps. Just the kind of challenge that the trio behind Wespi de Meuron Romeo Architetti . In fact, they were the ones who suggested the property to their clients as ideal for the vacation house the couple were looking to build. “It’s very typical here,” Jérôme de Meuron says. So his firm is well versed in tackling the topography.

Nevertheless, the first-time clients were initially shocked by the architects’ proposal: a cascading four-level house entirely in concrete. “Our houses relate to the hilly Ticino region’s traditional architectural language, which is old stone,” de Meuron continues. “The concrete would have the same rough character.” It didn’t take long for discussions and local house tours to bring the couple onboard.

Concrete aside, the house is no bunker. For that, credit the many inside-outside connections. Throughout the 2,000 square feet, large windows frame views, and even more enormous doors open to various outdoor “rooms.” 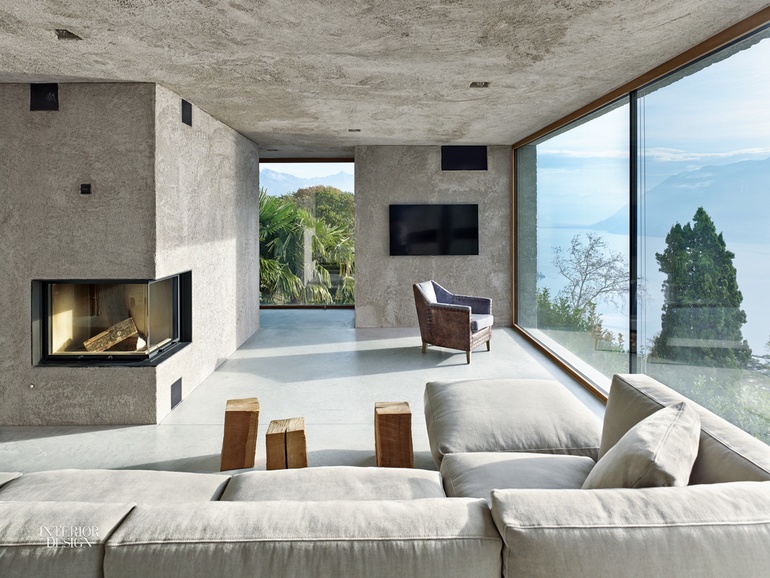 Forms interlock like a three-dimensional puzzle. Beyond the parking spots for two cars, starts at the top— everything but the roof is still pretty much invisible at this point. From here, a stairway leads down to a courtyard, signaling arrival. Now the architecture truly begins to unfold. Next to the front door is an expansive window, a wall of glass, through which the first of the two public levels .

It’s shared by the kitchen and the dining area, which introduce the materials palette for the house overall: concrete, stainless steel, plaster, and oak. That’s it. Nothing more. Lightening the austerity, the graceful forms of white shell chairs by Charles and Ray Eames line both sides of a simple rectangular dining table that’s, of course, oak. The tableau, including a wood- burning fireplace, suggests leisurely meals for the couple and their extended family. There’s also a pleasant view, but the real postcard panoramas are yet to be seen.

Boom. They pop into crystal-clear focus when you walk over to the kitchen. Thanks to an uninterrupted 12-foot-wide span of glass, the lake and mountains appear to be in arm’s reach. And little inside competes with the vista. The oak cabinetry and the stainless counter and appliances couldn’t be more clean-lined. 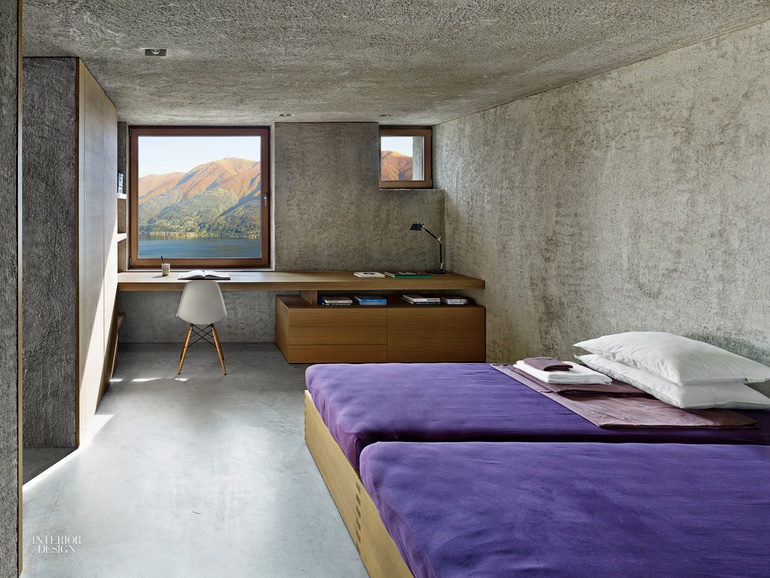 Furnishings continue in the spare vein in the living room, down one level via stairs or elevator. A mid-century chair sits alone in a corner. Opposite, putty-toned fabric covers an Antonio Citterio sectional, behind which various niches are carved in the plaster wall. “Places for books and objects was a client request,” Luca Romero says. “Rather than add shelving, we integrated it.” Acting as side tables are simple wooden cubes cut from local trees.

At the back of the living room, a monumental pocket door, oak punctuated by rows of round holes, confers a sense of enclosure and protection. Then the door slides away, opening the room to the main courtyard. While it’s not physically central, it’s designed to be the heart of the house, recalling the piazzas of towns. “External and internal, landscape and architecture, are all tied together,” Markus Wespi says. Olive trees dot the paving, piazzalike.

We now descend to the guest level, with its two bedrooms and its gym—as if all the running up and down stairs weren’t enough exercise. At the very bottom, oriented toward the lake, is the master suite. Its no-fuss furnishings again embody Swiss precision, but luxury is steps away. A short corridor connects the bathroom to a sauna. 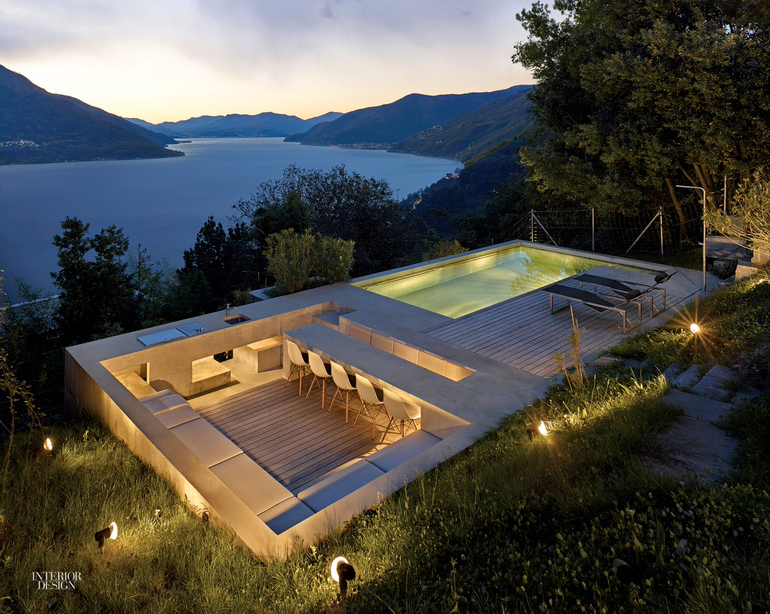 Prefer a dip in the pool by the lake? The indoor stairs and elevator aren’t the sole options for getting there. From each of the four levels, footpaths meander downward. “The different routes are a village reference,” de Meuron says. They terminate at a concrete form sunk into the slope of the land. Inside is not only a swimming pool but also an open-air kitchen.