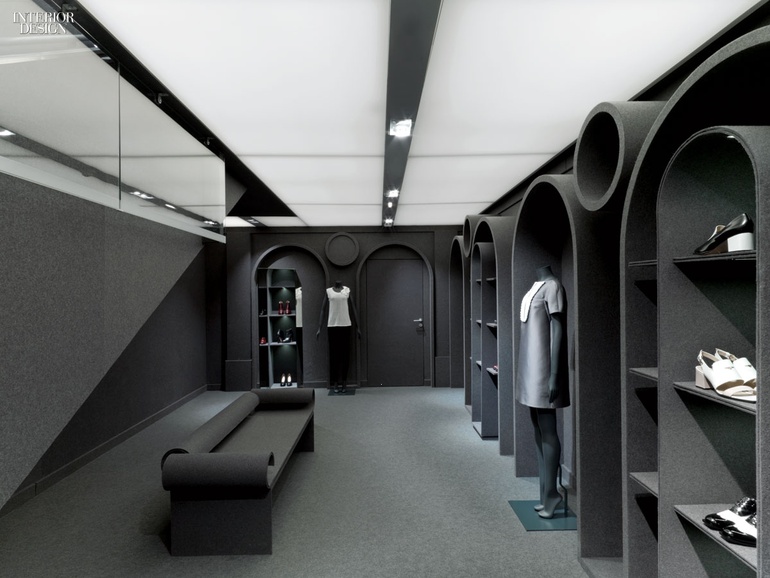 “We’d like a store that’s invisible.” Such was Viktor Horsting’s opening volley when he and Rolf Snoeren invited principals Pierre Beucler and Jean-Christophe Poggioli to brainstorm on a Paris boutique for the experimental and witty fashion label. Beucler and Poggioli’s response was a concept they christened “ghost architecture,” reducing neoclassical elements such as arches and oculi to their most essential forms. “The term ‘ghost’ is about absence,” Poggioli explains. He and Beucler also proposed cladding the 4,700-square-foot interior in just one material, gray felt.

About the only thing that remained after demolition was the staircase connecting the street level to the basement. If shoppers don’t notice that the upper level narrows toward the back, and the ceiling slopes down considerably, that might be partly because their eye is deceived by the converging grid behind the glowing stretched ceiling and partly because they’re focusing on the imposing series of arches over the stairwell. Below, meanwhile, the perimeter is lined with a hypnotic succession of arches, most containing a mannequin or shelving. None of the arches are fixed in place, so they can be used as freestanding displays. Beucler and Poggioli preferred to maximize flexibility, as merchandise evolves from season to season.