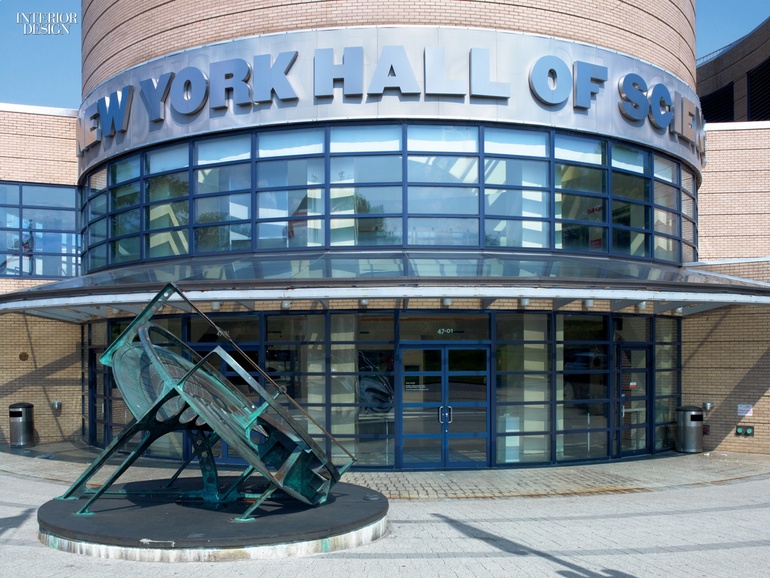 A rippling structure, designed for the 1964 New York World’s Fair, makes an impressive home for this full-fledged exploratorium. However, its lower level was lackluster, a wide-open gallery peppered with tabletop exhibits. A massive concrete column in the center was the sole spatial demarcation. “Kids zoomed through like pinballs,” partner Aleksey Lukyanov-Cherny notes.

He reinvented this 11,000-square-foot gallery as a hands-on design lab that comprises five stations, thereby directing traffic. The Tree House, an arklike form of bent slats milled from salvaged birch logs, is constructed around that massive central column. Future architects hunker down in the Sandbox to build structures from wooden dowels and rubber bands. Tinkering with LEDs and electrical circuits happens in the Studio. Maker Space demystifies prototyping tools and processes. For performance-related projects, Backstage comes complete with overhead rigs and rolling screens. Rubber-cork com-posite flooring flows throughout.

Fabricating and preassembling all components allowed crucial refinements to be made. “Not even complex computer modeling will tell you how materials will behave in a one-off project like this,” Lukyanov-Cherny says. He has observed a parallel between how his designs evolve through experimentation and how problem-solving occurs at the Hall of Science: “These kids could eventually put us out of business.”