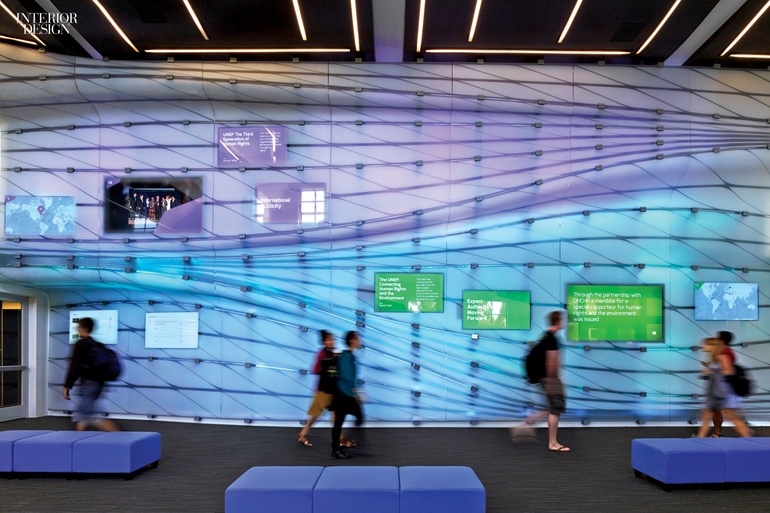 Being President Barack Obama’s alma mater is this college’s biggest claim to fame. But design has become another talking point, thanks to Hagy Belzberg, who won an ideas-based competition to renovate a century-old academic building, now the McKinnon Center for Global Affairs. The Interior Design Hall of Fame member started by looking at the way young people think, learn, and interact with technology and one another. He found that, today, education needs to be participatory, and technology is king. So he conceived the building as “itself technology rather than just housing technology,” he says. Gutting all four levels, 40,000 square feet, allowed him to make a big statement with an atrium lobby featuring an intervention that he describes as a “digital Post-it wall.” More properly called the Global Forum, it’s a folded plane in slumped glass sandwiching a layer of vinyl, printed with graphic patterns, and lit by color-changing LEDs. The wall furthermore incorporates LCD monitors on which members of the community can post their content, presentations, and on-line conversations via a proprietary app.

Belzberg swapped his technology hat for a preservation one when it came to the auditorium, originally a chapel. He discovered its tall windows and its painted ceiling beams during demolition and painstakingly restored them. History, after all, is crucial to a well-rounded education.