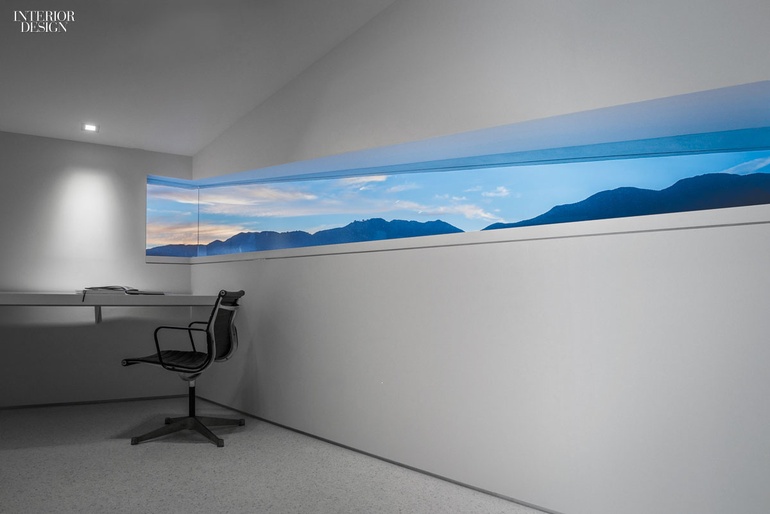 A celebrity pediatrician, author of The Happiest Baby on the Block, Harvey Karp had shared a 1961 A-frame with Nina Montée Karp, an artist turned environmentalist and documentary film producer, for 15 years by the time the urge to renovate became irresistible. “The house was like a Swiss chalet, dark with heavy wood. They were looking for something completely different,” Patrick Tighe says.

Different is what they got. Tighe stripped the house down to its A-frame, then expanded from 2,100 to 2,900 square feet by working magic with zoning codes and neighborhood covenants. He particularly cites a new angled volume cantilevered from the second story—an arresting intervention that dominates the crisply faceted white plaster exterior. Rising to meet the cantilever, the front door is unusual and substantial: a glass panel that pivots hydrau­lically. “It’s a bit grand for a modest house,” he demurs. But the interior, with its unmistakable art-gallery allusions, absolutely lives up to the introduction. Sunlight streams in from new skylights, including one perfectly aligned with the staircase. Sui generis Tighe, it’s nothing more than a set of floating treads precision-cut with a pattern that’s denser close to the supporting wall and increasingly open away from it, producing shadows that change with the hour and the season.