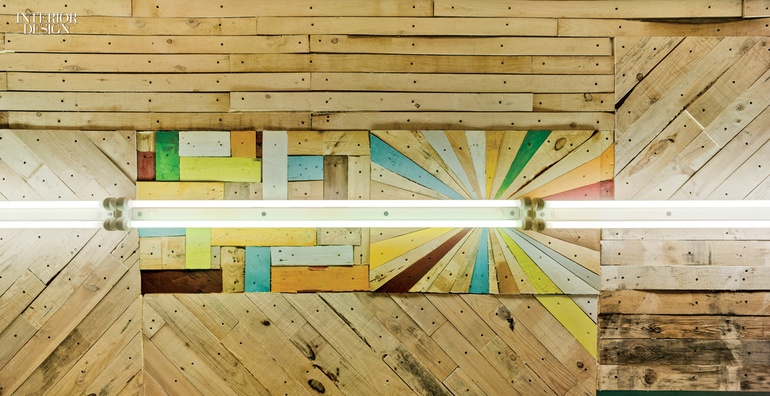 Hardscrabble sea dogs, perhaps a pirate or two, passed through the Spanish port of Cartagena during the 18th and 19th centuries, packing its taverns to quaff pints of wine between voyages. So, designing a takeout fish joint, Martín Lejarraga conceived a tribute to maritime traditions and old dockside bars—despite the fact that the location he had been handed was far from nautical, a former art gallery in the city’s historic center. His intervention was to clad the pristine 120-square-foot white box almost entirely in rustic planks reclaimed from shipping pallets.

The main exception to that is the floor, a sea of blue-painted concrete visible through the storefront’s glass doors. There are also a handful of blue, green, and white ceramic tiles that he discovered behind the plasterboard on the rear wall and simply left in place as accents to the wood. The fluorescent linear fixture over­head was similarly existing. For artwork to flank the entry, he recycled segments of the glass he’d laminated with a fish pattern for a previous project, a ship terminal. All of which helped in sticking to a budget equivalent to less than $4,000.

Then there’s La Sirena, a 19th-century wooden mermaid hung high on a sidewall. The establishment’s logo incorporates her saucier counterpart, a sailor’s mermaid-girlfriend in a stripy crop top.