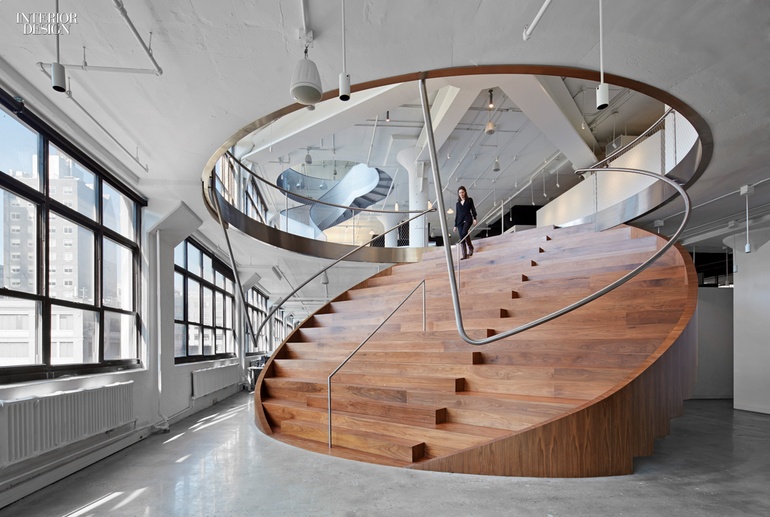 A surreal segment of Portlandia features a cameo from Oregon-based advertising agency Wieden + Kennedy's giant “nest,” actually a lounge wrapped in woven branches. On TV, the nest levitates, bursting through the roof. But don’t expect similar shenanigans at the agency’s satellite office.

Matters of ascent do play a part, however. To make room for stairs wide enough to serve as bleacher seating for staff meetings, principals Dan Wood and Amale Andraos of WORKac—who happen to be husband and wife—removed one of the mushroom columns that march in orderly rows through the converted printing loft, then re-distributed the load with the assistance of a starburst of steel ceiling beams. The resulting bleacher-stairs, an up-tilted walnut disk, are indisputably the centerpiece of the office’s 50,000 square feet, split between three levels. “We went for a sense of connection and intimacy, moving away from an atrium concept in which everything would be revealed at once,” Andraos says.

An even more unusual meeting spot, perhaps, is essentially alfresco: a glass-fronted double-height corner with the glazing removed from the windows. Good times continue at the freeform bar, where draft beer flows at the marble counter. Heine-ken, it turns out, is an agency client.