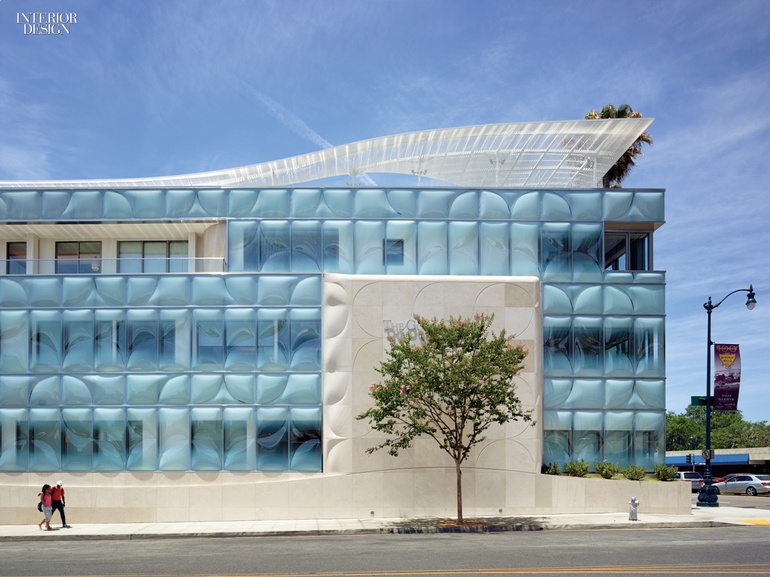 Put Interior Design Hall of Fame member Hagy Belzberg together with Joan Behnke, and you’ve got an instant landmark in the Beverly Hills landscape—more specifically a building renovated, expanded, and furnished for a venture-capital firm. The exterior of the 1960’s building and Belzberg’s ground-up addition is mostly slumped, laminated glass that’s transparent or opaque to varying degrees as a result of the three iterations he designed for the panels, plus a dozen patterns for the interlayer. To counterbalance the shimmering glass, he had weighty limestone blocks hand-finished and carved. A bridge joins the two volumes, totaling 135,000 square feet.

Inside the older structure, Belzberg carved out a triple-height central atrium and capped it with a skylight. Evident throughout, in gestures small and grand, is his and Behnke’s shared interest in pattern and form. “Computer modeling facilitates design at all different scales,” he notes. The main staircase is a composition of complex curves rendered in cerused-ash slats. It’s a seductive connector, so much so that most staffers bypass the cylindrical glass elevator that ascends and descends alongside a screen wall carved from cerused oak. Behnke’s inspiration for one of the patterns in the screen’s evolving surface was a centuries-old marble facade spotted while in Italy. 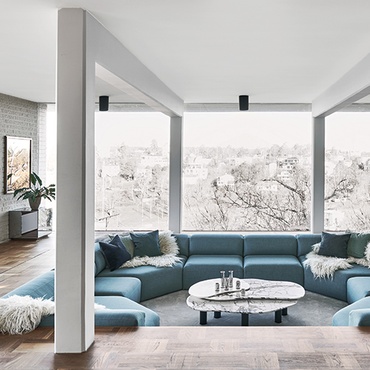