Home Run: Inside the Residences of 10 Designers 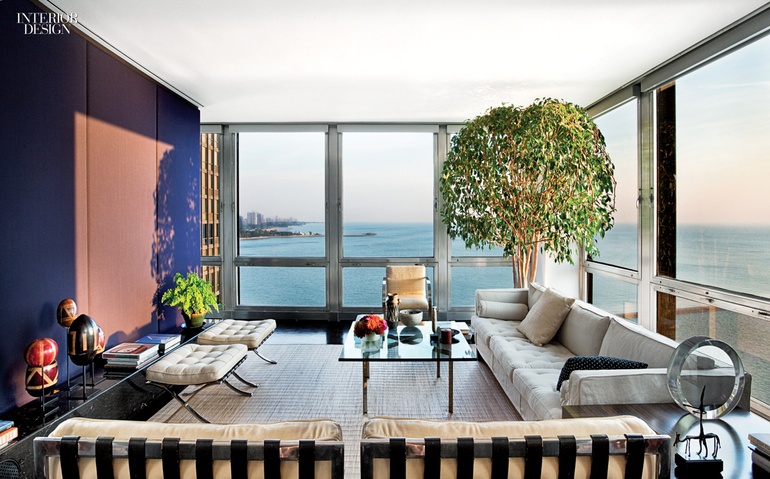 High in the sky or deep in the country, what kinds of spaces do Hall of Fame members live in?

Standout: After living in one of Chicago’s famed Ludwig Mies van der Rohe towers for 17 years, Robert Kleinschmidt expanded his apartment by buying a similar one next door and combining the two. The result was a 1,800-square-foot corner unit with sweeping views of Lake Michigan.

Standout: Even before Annabelle Selldorf, Jamie Drake's fellow Interior Design Hall of Fame member, had broken ground for a New York apartment tower buzzed-about for having private sky-garages, Drake had already signed on to buy a second story unit there. The kitchen opens to the living area, where standouts include a cocktail table in Greek marble and a white tufted sectional where he sits to smoke a slim brown cigarette.

Standout: Amid a woodland landscape that Bohn compares to Italy's sylvan Tuscany, she reimagined three structures as a single compound. Five bedrooms morphed into three, including a master suite where the bathroom's freestanding tub has been joined by a driftwood table, long used outside, and a sepia-tone photomural of a sultry Marilyn Monroe surveys the scene.

Standout: Longbranch, population 30, was the Washington town where Jim Olson's grandfather bought an 8-acre property in 1913. On it was little more than a 14-foot-square bunkhouse that eventually passed down to Olson, who started working on it when he was 18. Furnishings vary in provenance. The living area's pair of linen-covered Bauhaus chairs join a sofa by Pietro Arosio and Olson's own Douglas fir table and stools, which double as storage.

Standout: The plastic shingles, spiral stair, and pink bathtub of the existing house aside, this beachfront plot was hard to beat. In the living area, white-ash paneling makes a quiet backdrop for a large painting of an abstracted waterfall, and a granite wall rises above a woodburning fireplace in blackened steel. The sectional, which comes from the couple's former furniture store, Avenue Road, is joined by pillows covered in vintage fabric and chairs by Marcos Teldeschi Arte e Design.

Standout: As a kid at the Harvard University Graduate School of Design, Lee Mindel felt free to follow his architectural notions wherever they led him. His two-story, 4,500-square-foot structure's unusual angles derive from lines paralleling the shore out back. On the exterior, cedar clads two pavilions split by a wedge of channel glass. Inside, eucalyptus veneers the paneling of rooms with polished concrete flooring.

Standout: The movie Brokeback Mountain was enjoying a huge success at the time Paul Siskin acquired 4 acres in a largely gay and lesbian residential enclave in Hudson, New York. A lifelong penchant for flexible, multifunctional spaces is instantly evident in a foyer lined with mahogany bookcases to serve as a library. That opens onto the 20-by-40 foot main room, which incorporates the living and dining areas and the kitchen.

Standout: Kevin Walz's 875-square-foot floor-through rental unit is unmistakably his. Walls, for example, are surfaced in a sanded fiberboard made from cellulose. His own production pieces and prototypes abound. A pendant fixture in custom-colored Corian hangs over a dining table in mahogany and red oak. He fabricated both the bedroom's armoire, in rusted and waxed steel, and his steel-framed bed in Rome, then shipped and assembled them on-site.

Standout: Harris and husband Rees Roberts' 1,500 square-foot apartment boasts a gas fireplace and a trio of windows, now framed in a brushed-oak veneer recalling Josef Frank. To bring reflected light into the core, the pair clad a corridor in beveled antiqued mirror--flush doors and all. Farther back are two efficient bedrooms. Almost everywhere, the raw-looking floor is sealed oak in a chevron pattern.

Standout: An ethereal light box occupies the upstairs of the 1920's Italianate garage sharing a downtown Oklahoma City property with the house where Rand Elliott lives with his wife, Jeanette. Besides being about light, the project is a meditation on the number four, revered in Native American culture, the subject of Losey's work. All four sides of the 600-square-foot open plan have windows, and he built an etched-glass enclosure around each.

Related:
At a Boathouse by Rand Elliott, Sports and Arts Go Hand in Hand
Elliott + Associates Architects Connects the Digital and Physical at ImageNet

View the slideshow for more images from each residence.