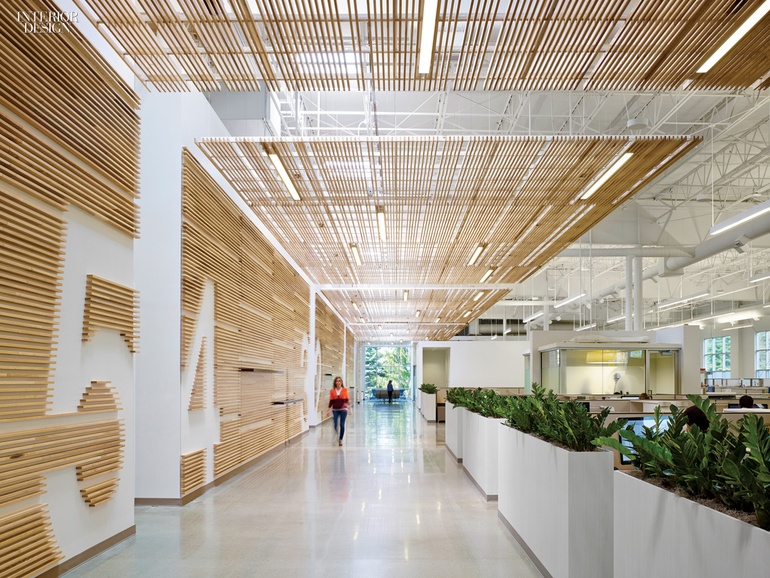 On the Kalamazoo campus of Western Michigan University, a public-private partnership bringing together the school, the city, and the state with a manufacturer, Newell Rubbermaid, has yielded a design incubator—with an interior by Perkins + Will design principal Eva Maddox. She was handed a 40,000-square-foot building, constructed warehouse-style, and asked to turn it into a branded environment suitable for 130 international designers.

“Given the 24-foot ceiling, we had to bring the scale down,” Maddox explains. A latticework canopy in clear-finished ash therefore hovers above the central circulation path, starting in reception and extending most of the building’s 300-foot length. On one side, the canopy descends to front a row of design labs.

Labs are identified by supersize numbers created by leaving out strategic sections of the ash strips, so the white-painted gypsum-board behind appears in the appropriate shapes. “The entire wall is a design feature,” she says.

A smaller feature wall, behind the desk in the reception area, comprises 1-by-3-inch blocks of end-grain Michigan ash, the majority stained black. Chairs in reception are by the Michigan-connected team of Charles and Ray Eames. Elsewhere, self-adhesive vinyl wall covering trumpets a Charles Eames quote in white letters on gray.